Gage Skidmore/Creative Commons
Tom Horne, who the race for Arizona Superintendent of Public Instruction, speaks at the 2014 Western Conservative Conference at the Phoenix Convention Center.
Tom Horne has been called the worst politician in Arizona, ever. It’s not hard to see why.

Yet voters are returning the 77-year-old Republican to public office. After winning five consecutive elections starting in 1996 — two terms as a state representative, two terms as State Superintendent of Public Instruction, and one term as Arizona Attorney General — in 2014, he became one of the only top statewide incumbents to lose a primary. Why? Scandals.

At one time, Horne was under investigation by six different state and federal agencies at the same time, including the FBI. But last week, he bounced back and won his old post by the narrowest of margins — less than half of a percentage point — and ousted Democratic incumbent Superintendent Kathy Hoffman. The result was a shock to most political pundits as Horne was the only Republican to win one of the top statewide races.

Overshadowed by a slate of MAGA election deniers, including Kari Lake and Blake Masters, the superintendent's race didn’t get much attention. Horne used that to his advantage, likely enjoyed name recognition from his years in office, and benefited from widespread conservative disgust of Hoffman’s restrictions during the pandemic.

Horne, meanwhile, argued that “kids are resistant to covid as opposed to older people.”

“My theory is that covid-denying anti-masker and anti-vaxxer Republicans wanted to take out their anger over school closures on someone,” local political blogger Michael Bryan opined. “Kathy Hoffman is the victim of Republican covid-denying ignorance.”

Horne eeked out a win by just more than 9,200 votes. Hoffman conceded the race on Thursday.

“After a hard-fought race, we came up short,” Hoffman said. “Serving as Arizona’s superintendent of public instruction has been among the greatest honors of my life.”

She did not congratulate Horne. Perhaps with good reason — his own party called him a “disgrace.” Here are four of the most epic mishaps in Horne’s public career. 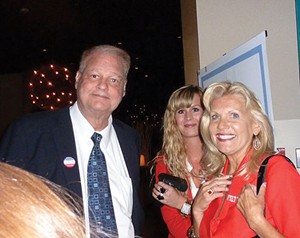 When He Committed a Crime to Cover Up an Affair

In 2012, FBI agents watched as Horne, the Attorney General, was involved in a hit-and-run accident in a Phoenix parking garage during a rendezvous with his alleged mistress. He was married to his wife of 40 years at the time.

Horne caused thousands of dollars of damage after careening into a parked vehicle and brazenly speeding off in a car belonging to his mistress. Horne pleaded no contest to criminal charges and paid a $300 fine.

The sex scandal scuttled his 2014 bid for re-election to the attorney general’s post. He lost in the GOP primary to now-Attorney General Mark Brnovich. Tom Horne employed David Stringer, pictured in 2019 before he resigned from the state House in disgrace, in his 2022 campaign.
Joseph Flaherty

When He Defended an Accused Child Sex Predator

In an August 2022 interview with Morgan Loews for "Politics Unplugged," Horne confirmed that David Stringer, a former state representative, was employed by his campaign for school superintendent.

“He’s completely innocent of the charges against him,” Horne said during the interview. “Believe me, if he had done what he was accused of, he would have been disbarred.”

In 2019, Phoenix New Times revealed that Stringer refused to cooperate with an ethics investigation into five sex crime charges he faced in 1983, including child pornography. That led to Stringer’s resignation later that year.

The Arizona House Ethics Committee also investigated Stringer for racism. It’s no wonder Horne is so quick to come to his defense — that’s something they have in common. 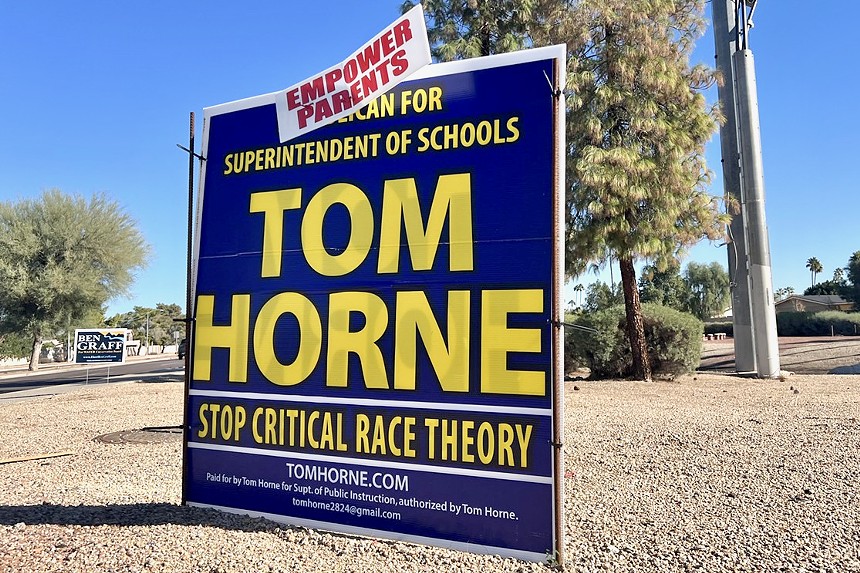 Tom Horne's many campaign signs dotting metro Phoenix claim that he will “stop critical race theory,” even though there is no such thing in Arizona schools.
Elias Weiss

When a Federal Judge Declared Him Racist

In 2017, after a seven-year court battle, a federal judge ruled that barring the curriculum was purely based on a racist hatred of Latino Arizonans.

Horne again broached the issue in a September 2022 debate with Hoffman after he was questioned about his stance on critical race theory, an academic framework that looks at American history through the lens of racism that's been co-opted by some conservatives as a catch-all to silence discussion around systemic racism.

His many campaign signs dotting metro Phoenix defiantly claim that Horne will “stop critical race theory,” even though there is no such thing in Arizona schools. When He Dodged Charges of Collusion

In 2012, as Horne gunned for re-election as attorney general, he evaded federal obstruction of justice and witness-tampering charges from the FBI’s exhaustive probe into allegations of illegal collusion and other violations in Horne’s campaign.

Rather than following up on the criminal referral, then-Maricopa County Attorney Bill Montgomery, now a justice on the Arizona Supreme Court with his own performance issues in office, decided to pursue a civil penalty against Horne and a campaign operative. Montgomery alleged coordination between Business Leaders for Arizona, the independent expenditure committee the operative led during the general election, and Horne's own campaign.

State law prohibits such collusion, which is penalized by three times the money in question in civil fines.

By 2017, the case involved the Arizona Supreme Court and was bounced around before it was ultimately assigned to Cochise County Attorney Brian McIntyre. The Yavapai County Attorney had earlier found that Horne broke campaign finance laws when he colluded on campaign spending for ads targeting his Democratic rival.

Horne faced a $400,000 fine, but McIntyre later absolved him of wrongdoing, and Horne never had to cough it up.