Until November 2021, Adam McDorman was an English teacher at Valley Christian High School, a private Christian school in Chandler.

Then, he spoke out about the school's discrimination against LGBTQ students. He was fired days later.

On Tuesday, McDorman filed a federal lawsuit against his former employer and alleged that he was wrongfully terminated and discriminated against. The 11-page complaint, which includes selections of emails and recordings of school officials, sheds light on the anti-LGBTQ views of school administrators.

The lawsuit was filed in the U.S. District Court for the District of Arizona against Valley Christian Schools, which operates the Chandler high school as well as an elementary school and junior high in Tempe.

"McDorman was terminated by VCS solely because of his sincerely held Christian belief about tolerance and acceptance and equality for LGBT persons," the lawsuit alleges. This belief, according to McDorman's attorneys, conflicts with "VCS’s … express religious discrimination and hostility toward LGBT persons."

Dan Kuiper, the head of Valley Christian Schools, declined to discuss the lawsuit with Phoenix New Times.  McDorman, through attorney Krista Robinson, also would not comment.

In November 2021, McDorman began to butt heads with the school's leadership over its treatment of LGBTQ students when an unnamed Valley Christian High School student — called Jane Doe in the lawsuit — came out on social media as pansexual.

Specifically, he clashed with Principal Josh LeSage, a former education official in Louisiana who joined VCS in 2020. On November 1, after LeSage learned of Jane Doe's identity shortly, he called a staff meeting and said that teachers and staff supportive of LGBTQ students were "like a cancer that needed to be removed from VCS."

At another staff meeting a few days later, McDorman spoke out about the discrimination at the school. LeSage informed staff in an email that he planned to meet with Jane Doe — without her parents present — to speak with her about her sexual orientation. In the email, according to a copy in the complaint, he called the idea that LGBTQ people could also be Christians "a hideous lie" and "so offensive."

"Right now we have a faculty member … who supposedly suggested in a meeting today that we invite a pastor of a local gay-friendly church to come and speak to our faculty to help us better understand this lifestyle and better minister to those kids we may have," LeSage wrote. "Hell no! We are not doing that." 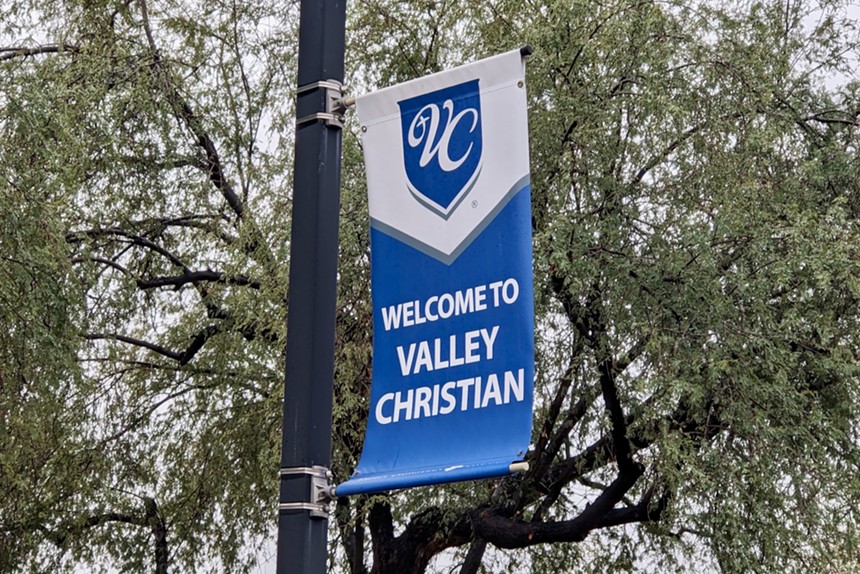 School officials berated a student who identified as pansexual, according to a new federal lawsuit.
Matt Hennie

McDorman was fired on November 9, 2021, which was a day after he confronted LeSage again and requested that the principal not meet with Jane Doe without her parents present.

The meeting with Jane Doe, however, proceeded. The student recorded the hours-long meeting between her, LeSage, and Chizzy Anderson, the school's supposed "student health and wellness coordinator." The two called the student "sinful" and said that "same-sex relations are an abomination to God," according to the lawsuit.

Neither LeSage nor Anderson responded to emails from New Times seeking comment.

By firing McDorman, the school discriminated against him for his own religious beliefs, his attorney argued. "The school fired him because his Christian faith includes acceptance for all LBGT persons, and he does not tolerate hostility or discrimination against them, especially the school’s students," Robinson wrote in a press release Wednesday.

Valley Christian Schools, which began as a single high school in Tempe in 1982, has about 900 students across its three campuses. It calls itself Arizona's "fastest growing Christian school."

The school is a private, religious institution — a status that helps evade lawsuits brought under Title IX, which prohibits sex-based discrimination for publicly funded schools. But in April 2020, VCS accepted a $1 million federal Paycheck Protection Program loan, according to the lawsuit. The federal funding could make VCS vulnerable to Title IX claims, such as McDorman's.

And VCS does not hide its views on gender and sexuality. In a screed under the "Foundational Positions" section of its website, VCS writes, among other things, that "rejection of one’s biological gender is a rejection of the image of God within that person" and "any form of sexual immorality … is sinful and offensive to God" and could result in a student's expulsion.

Valley Christian Schools has yet to file a response to the complaint in court.