Best of Phoenix: These Local Bakeries Make the Best Bread, Pastries, and Doughnuts in the Valley

Baking is such a unique blend of art and science. But when bakers really get it right, another element joins the mix, bringing the category into the realm of magic. Throughout metro Phoenix, we are lucky to have multiple baking magicians bringing the most perfect pastries, bread, and doughnuts to life. These are the Valley's best bakeries.

Best Bakery: JL Patisserie
4700 North Central Avenue and 7342 East Shea Boulevard, Scottsdale
480-859-4459
At both locations of the celebrated JL Patisserie, the options are overwhelming in the best way. A small pastry case displays delicate desserts, macarons, eclairs, and cake slices. Next, a large counter is covered with breads and pastries, mostly everything made with flaky, crunchy, butter-filled croissant dough. The pain au raisin is a favorite, a big swirl of flaky dough, crunchy on the outside and soft within, brightened with bursts of flavor from juicy raisins. The ham and cheese croissants blur the line between breakfast and lunch, and the cream-stuffed cruffins make a decadent dessert. We like to keep up with what the bakery is doing on their TikTok account, which is full of light-hearted videos that never fail to make us hungry. Proof bread is always ready for its close-up.
Allison Young
Best Bread: Proof
125 West Main Street, Mesa
480-270-8320
Proof has been a staple at nearly every farmers' market in the Valley for a reason, and it's not only because they operated out of a converted garage until last year. Jon Przybyl and Amanda Abou-Eid create their pastries and decadent breads from a single sourdough starter named Harriet that they've perfected since her start in 2010. Using a sourdough base for all their breads and pastries has additional health benefits (because of fermentation) and adds an extra dimension to the flavor. In addition, Harriet balances sweet pastry fillings in a way that a grocery store bakery could never. Przybyl and Abou-Eid also make a point to use seasonal ingredients when available. The bakers constantly rotate pastry fillings, such as a cinnamon pear danish in the spring or lemon curd filling a few weeks ago. Other must-tries at Proof, which you can find at farmers' markets in Scottsdale, Phoenix, and Gilbert, include the pain au chocolat, morning buns, and the classic country sourdough. Bagelfeld's jalapeño cheddar flavor is a popular choice.
Allison Young
Best Bagels: Bagelfeld's
2940 East Thomas Road
602-772-6229
Bagelfeld's has officially put Phoenix on the bagel map. Started by Charles Blonkenfeld as a pandemic pivot, the Brooklyn-born chef grew up on bagels, but it wasn't until 2020 that he started making them. The process takes three days and uses old-world traditions like slow-fermenting, hand-rolling, boiling in malt syrup and honey water, and baking to a burnished exterior, for a New York (chew and flavor) meets Montreal (size and sweetness) finish that's all Phoenix. Not only do Bagelfeld's bagels bookend both the bomb breakfast sammies at Stoop Kid and the sell-out Saturday sandwich at Nelson's Meat + Fish, loyal followers line up at farmers' markets and the recently opened brick-and-mortar on Thomas Road. Standout flavors include asiago, jalapeño cheddar, and fennel raisin, and all pair perfectly with their house-made schmears (lemon and herb cream cheese on an everything bagel — yes please). The only downside is they sell out quickly. La Purisima Bakery created orange and purple conchas to celebrate the Suns' playoffs run.
La Purisima
Best Mexican Bakery: La Purisima Bakery
2318 East Indian School Road and 4533 West Glendale Avenue, Glendale
602-957-2771 and 623-842-1400
This local bakery shot to social media fame last year when it sold purple and orange tie-dye conchas to support the Phoenix Suns. But La Purisima has been churning out some of the best pan dulce in the Valley since 1983. Stop by the Glendale or Phoenix stores to find shelves of fresh baked and brightly colored pastries lining the counter, offering almost endless options. Cherry-filled turnovers, colorful conchas, fruit-filled empanadas, and overflowing cream puffs beg to be picked by hungry customers pointing to their selections at the busy bakery. Bags and boxes get filled quickly, making way for the next batch of baked goods to be put out on display. Regulars order their pan with a dozen tortillas for later, or a cup of fresas con crema for an extra sweet treat. The Salted Knot makes the best pretzels in town.
Maria Vassett
Best Pretzels: The Salted Knot
2655 West Guadalupe Road
602-688-4422
If you feel like getting twisted, The Salted Knot has you covered. Sure, "getting twisted" could be defined in many ways, but in this case, it means you have a hankering for a soft, hot, buttery pretzel. This Tempe-based business was founded during the pandemic by Maria Vassett and Chad Day for a couple of reasons. They were interested in starting a new side-hustle business, and they liked the idea of providing patrons with something that would make the challenging world events feel a little less stressful. The pair developed a signature recipe through trial and error until they got their perfect blend. Nowadays, folks are lining up at their booths at area farmers' markets to get their fix. Covered in butter and salt is one way to enjoy these mouthwatering doughy delights, or maybe you'd dig one that's buttered and topped with a heady everything-seasoning blend. Sweet pretzels are on the menu, too — cinnamon sugar blends with the melty butter to make you downright giddy. Chin Up Donuts serves classic and unusual flavors.
Allison Young
Best Doughnuts: Chin Up Donuts
7325 East Frank Lloyd Wright Boulevard, Scottsdale
480-912-1240
When you wake up in the morning craving bacon, don't bother to whip out your frying pan. Just cross your fingers and hope the daily rotation at Chin Up Donuts includes their savory Whiskey Pigness doughnut with bacon and maple goodness. The shop offers tasty options you won't find elsewhere, such as the Sriracha-Cha doughnut and other savory options. We love their scratch-made brioche-style doughnuts, and the fact that they have gluten-free options. Plus, the shop is full of surprises. Sometimes they have free film merch on the weekends or do creative collaborations with local chefs. And just walking into the store can enhance your mood, thanks to the playful decor that includes macrame and disco balls. It's the only doughnut shop where we can't resist taking at least one selfie every time we pop in, and there's even a small wall of merch so you can get a fun souvenir of your time there — without spending a lot of dough. 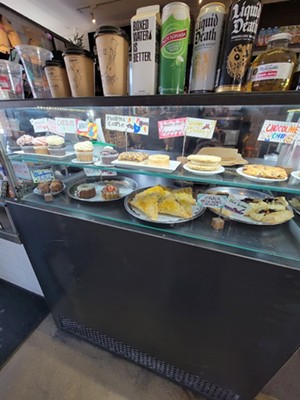 The mouthwatering baked goods at Nami are all made in-house and vegan.
Melissa Parker
Best Vegan Doughnuts: Nami
2014 North Seventh Street
602-258-6264
Nami is an extension of Green New American Vegetarian — the longtime Valley eatery with two locations that introduced metro Phoenix to vegan dining. An array of puffy, yummy doughnuts is among their breakfast items and sweet eats. They're lightly crispy on the outside while fluffy and airy on the inside; diverse flavor components match those textures. Oh, they're also huge. Downing one is plenty satisfying, but with so many delicious choices, it's hard to stop there. You'll eagerly await their return when you find the ones you like. In the meantime, there's plenty to tempt you. The French toast varietal is an airy version of the popular breakfast dish in doughnut form. Chocolate pistachio is another must-have — the lip-smacking pastry is a velvety chocolate affair topped with a nut crumble that perfectly merges the flavors. Raspberry lemon is a divine combination of sweet and sour. Flavors can change daily, so check back often. 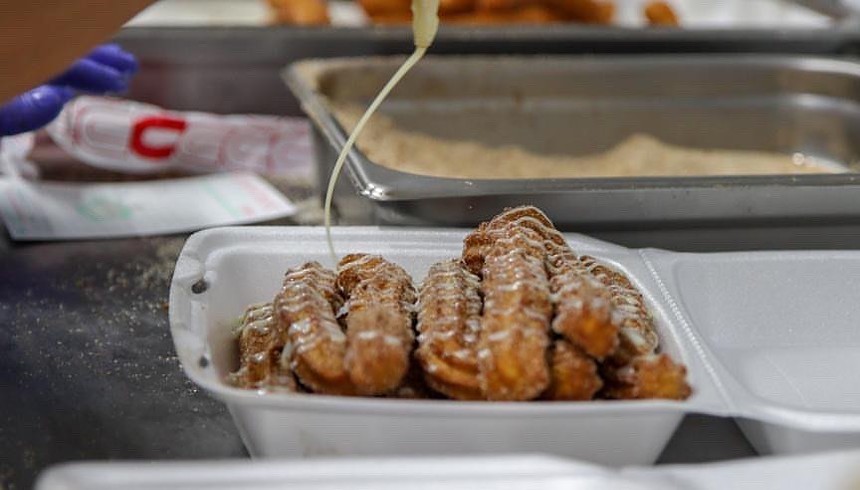 The churros at Churros Don Lencho are worth the hunt.
Churros Don Lencho
Best Churros: Churros Don Lencho
7615 West Lower Buckeye Road
Since opening in 2020, Churros Don Lencho has quickly become a churro go-to, drawing crowds to its practically middle-of-nowhere location. Parked most nights behind an AutoZone on Lower Buckeye Road, the food truck's location may not be fancy, but the churros are. Thin, crispy, and just the right amount of dense, the freshly fried doughy delights could easily pass for a fancy dessert at an upscale resort. Founder Edwin Tlaseca got the idea to make churros during a trip to Jalisco, Mexico, where his family is from. Afterward, he got down to recipe testing until he had the perfect crispy-on-the-outside, soft-in-the-middle balance. Not only are they a deal — get 12 churros ($12), six churros ($6), filled churros ($2), or the churro sundae ($9), a six-churro treat topped with ice cream, whipped cream, and sprinkles — the treats are vegan, meaning even more people can experience what Churros Don Lencho has to offer. 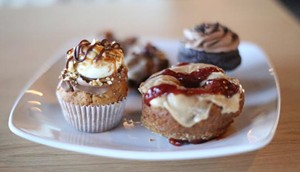 Jewel's Bakery & Cafe serves a selection of gluten-free baked goods.
Judy Nichols
Best Gluten-Free Restaurant: Jewel's Bakery and Cafe
4041 East Thomas Road
602-714-5243
This gluten-free eatery serves breakfast, brunch, and lunch from its location at 40th Street and Thomas Road in Arcadia. The biscuit and gravy, a fresh-baked garlic cheddar biscuit topped with sausage gravy and served with two eggs your way, is a great option for those who may not otherwise be able to eat the dish. Chicken and waffles come in several varieties, from classic to popcorn to hot chicken, and a churro and Belgian waffle are also on the menu. The baked goods at Jewel's are also delicious, whether you go for Fruity Pebble-topped doughnuts or a chocolate chip cookie. The cute cafe is a non-glutinous dream, with breakfast and lunch options for the entire family, including grilled cheese and peanut butter and jelly sandwiches for the kids. Cocktails are also on the menu, with margaritas, mimosas, and bloody marys.