Frozen Bananas, Cornballs, and Mayoneggs: What To Eat While Watching Season Four of Arrested Development 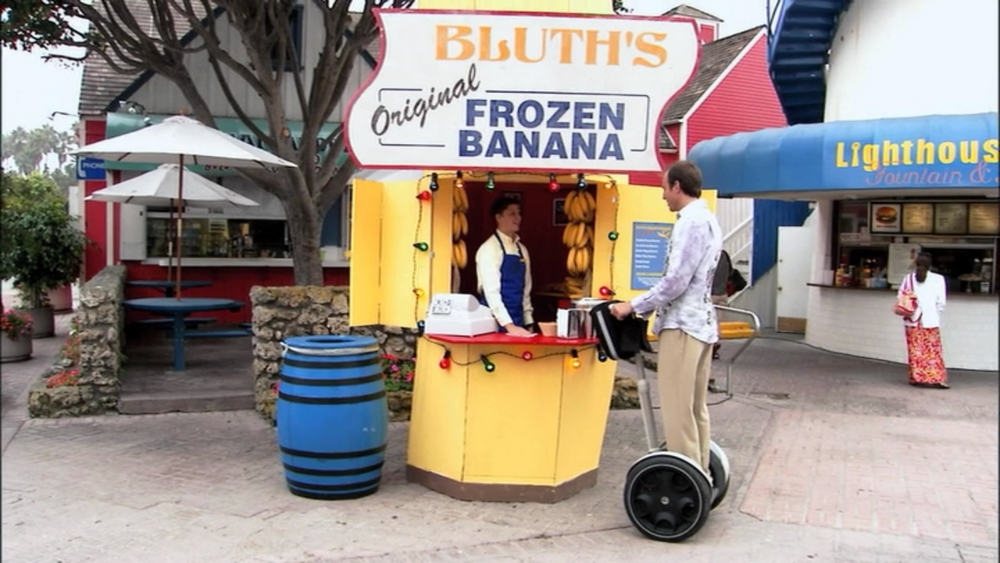 It's the story of a wealthy family that lost everything and the one son who had no choice but to keep them all together. It's Arrested Development. And it's back.

The Netflix premiere of the long-awaited fourth season of Arrested Development is almost upon us. When all 15 episodes are made available to a rabid viewing public Sunday, May 26, you should be watching. You should also be eating. Below, a menu full of Arrested-themed food to pack your sweet pink mouth so full you'll be the envy of every Jerry and Jane on the block.

See also: - 'Honey Boo Boo's' Sketti: We Made It, Here's What It Tastes Like. (Hint: It Will Ruin Ketchup For You)

Frozen Bananas This is a no-brainer. George Bluth Sr.'s banana stand has been spreading chocolate-dipped nanners to hungry boardwalkers since 1953, except for those few times the stand was burned down or destroyed by a car. The original frozen banana -- one piece of fruit dipped in chocolate and covered with nuts -- is a classic, but the adventurous could go for a George Daddy (frozen dipped bananas sandwiched between chocolate grahams) or a double-dipped, double-nutted version called The G.O.B. If you're really good at making them, you might even want to start your own banana stand. There's always money in a banana stand.

Cornballs To make, simply mix flour with egg whites and whole kernel corn, shape them into balls and drop them into a deep fryer. But not just any deep fryer will do! You need The Cornballer, presented by George Bluth and Richard Simmons. This delicious snack-creation machine is only $29.99 in the U.S., but may be a little hard to find since it was made illegal after it was found to cause horrible scalding burns. But you might still be able to find one in Mexico!

Skip's Scramble Too many choices? Is the menu at Skip Church's Bistro too big to swallow? Let Skip serve you up a scram that has something from every dish in the menu. It will knock you into next week! $47.95 a la carte, $57.95 egg whites only.

Vodka Tonic A big glass of Cloudmir vodka would be best -- it's one of Lucille's brands. Just make sure you drink it all, because, as we all know, vodka goes bad once it's opened.

Bread It's only right that we include bread to honor Tony Wonder, a magician famous for baking himself into a giant loaf to feed the troops. Serving is easy -- just hide a bag of slices in your shirt and pull them out while pretending they're coming out of your skin! The "How dey do dats?" eat that stuff up.

Chicken Fried, grilled, poached -- it doesn't matter how you serve it. What matters is the dance.

Stew Real easy to make. Just find a few bones with a little meat on them, take them home, throw them in a pot, add some broth, a potato. Baby, you've got a stew going!

Mayoneggs You, like Michael, may have wondered what could draw George Michael to Ann, who is so bland that under her yearbook photo it said "Not Pictured."

It's not her passionate activism, or her sense of Christian morality, or her hymn-singing voice. It's the way she eats eggs. It so cute: she'll take a little pack of mayonnaise and squirt it into her mouth, then take a bite of egg and swish the two together. Isn't that adorable? Are you okay?

Blueberries Because I blue myself.