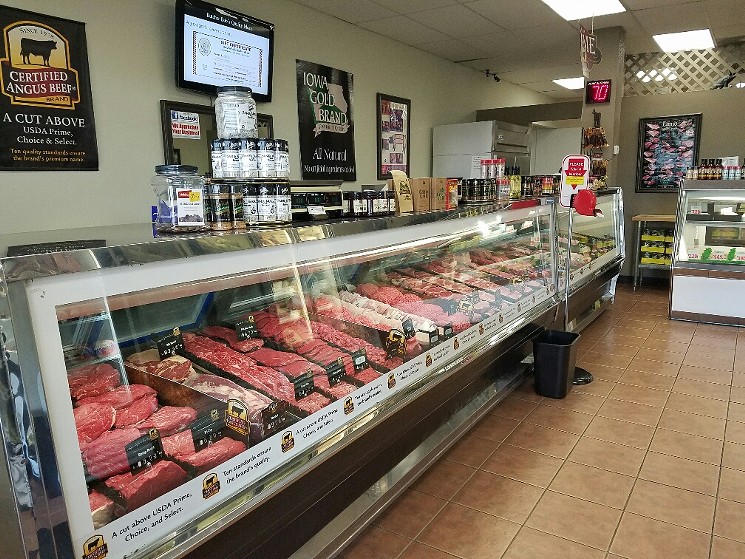 11663 West Bell Road, #2, Surprise
Around since 1988, Butcher Bob's has been a family-owned, west Valley business through two generations, and bills itself as an old-fashioned neighborhood meat market. Butcher Bob's is a licensed retailer of CAB (Certified Angus Beef), and also sells all-natural pork and chicken, specialty and holiday items, and fresh Hawaiian sushi-grade fish on a monthly basis. The people behind the counter also make their own sausage.

10392 North Scottsdale Road, #104, Scottsdale
Rusty Nail Meats, established in 2019 by Shane Brooks (from Oregon) and Hanna Pont (from Los Angeles), is going for that "hometown butcher” vibe. Brooks has apparently butchered all his own game post hunting trips, and as a hand at Oregon farms, since he was a kid. Today, the Scottsdale meat shop offers beef sourced from the Midwest, including New York strips, filet mignon, sirloin, and skirt, flank, and hanger steaks. Lamb, veal, chicken, pork, and fish are also available, as well as exotic meats like alligator, rabbit, boar, and bison. 4900 East Indian School Road
The German Sausage Company has been around since 1982 in the Arcadia area, but the Heidelberg, Germany-born owner, Joërg Scherz, has had family in the sausage-making world since 1885. This shop features smoked sausage like mettwurst, landjaeger, and paprika salami — plus liver sausages, old-fashioned sandwich meats and cold cuts, and salted smoked meats like bauernschinken, nusschinken, and lachsschinken. No credit or debit cards are accepted, and German Sausage Company only offers in-store sales. 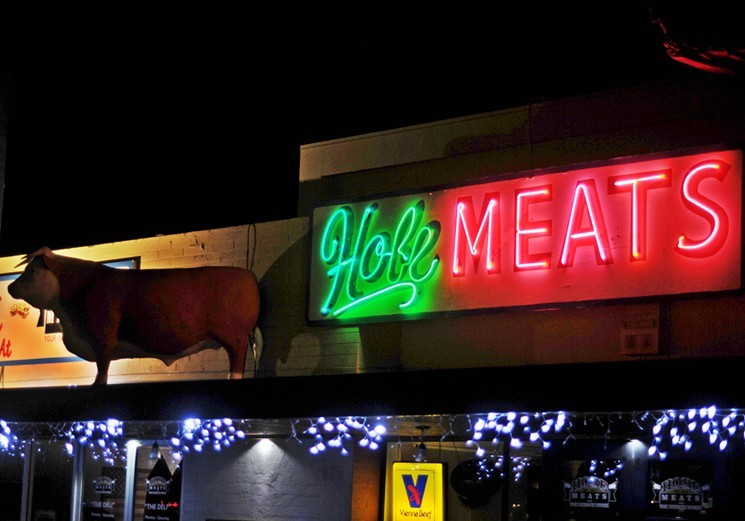 6044 North 16th Street
Hobe Meats can be spotted while cruising through uptown Phoenix by the giant plaster steer and its iconic neon sign. Inside is an old-style butcher shop menu of prime- and choice-grade meats, including beef cuts like top sirloin, pork cuts like country ribs, and fresh chicken in the form of boneless breast meat. Hobe Meats buys from the Greater Omaha Packing Company, and products are allowed a minimum of 30 days aging. There are also marinades and sauces, whole roasting pigs, a weekly Saturday barbecue, and even all-natural pet food. Hobe Meats: Phoenix Butcher Shoppe was established in 1962.

4308 East Main Street, Mesa
Roger and Sally McConnell established this old-school butcher shop featuring corn-fed Iowa beef and all natural pork and chicken products in Mesa in 1990. The “Meat for Smokin'" section of the Midwestern Meats menu offers brisket, baby back pork ribs, and tri-tip, while the beef menu yields prime rib roast, filet mignon center cuts, chateaubriand, hamburger meat, and steak cuts galore. There’s also Midwestern Meats Seasoning, sides ready to go at the counter, a made-from-scratch bakery, and a restaurant with a home-cooking theme. Plus, there are reheating instructions on the website. 37636 North Tom Darlington Drive, Carefree
Around since 2016, the petite Meat Market offers cuts from Chiricahua Pasture Raised Meats with an Old World charm. The best part? You can watch the staff butchers do their work on a flatscreen mounted above the checkout counter. There is also a drying program here, with steaks aged for 30 to 45 days, and it can handle most any custom order you can dream up.

1712 West Bell Road
2945 East Bell Road, #101
Established in 1963, making it a fixture by Phoenix standards, Stanley's Homemade Sausage Company knows more than most about sausage. The store, which is a mix of market, deli, and small restaurant, is neatly packed with Stanley's brand products and European specialty grocery products, as well as sausages and other smoked and specialty meats, cheese, and made-to-order items like sandwiches and soups. They also have an onsite processing plant, and the Stanley’s team cuts and spices everything with house-made cures and spices. 2390 North Alma School Road, Chandler
A “New Old Fashioned Meat Market,” Von Hanson's Meats & Spirits originated in Minnesota in 1984, but due to a high demand from Midwesterners relocating to the Valley, a Chandler location opened its doors in 2004. Von Hanson’s features more than 70 types of sausage and brats, plus stick meat — all of which is made in the store’s smokehouse. Find Polish sausage, andouille, kielbasa, and Swedish potato sausage, plus butter garlic chicken breasts, and all-natural pet food. The shop also offers game processing for deer, moose, and more, apple to mesquite to hickory chunks for barbecuing, multiple shelves of sauces and spices, and plenty of craft beer all around. Schreiner's Fine Sausage has been serving 60 varieties of gourmet sausage since 1955.
Casey Schiller

3601 North Seventh Street
You’ve definitely seen the iconic Schreiner's Fine Sausage stand while heading down Seventh Street, and if you’ve ever wanted to know what’s on the menu (unless you’re already a frequent customer), let us help you out. Schreiner's has more than 60 varieties of homemade, gourmet sausages ranging from Polish, German, Italian, Swedish, and Hungarian to custom-blended sausages. The menu also offers lunch meat, and extras like slab bacon, beef jerky, and smoked pork products. Schreiner's Fine Sausage was founded in 1955 by Hugo Schreiner, and has been overseen by Nancy Schiller for more than 30 years.

6606 East McKellips Road, #104, Mesa
Chuck McClure is the owner, butcher, and counterman over at Chuck’s Fine Meats in east Mesa. A spinoff of Hobe Meats in Uptown Phoenix, Chuck’s offers house-aged prime steaks as well as seafood and exotic options like veal and wild boar. Cuts of prime rib, rib roast, and beef tenderloin are prepared to order, and all special orders appear to be welcome. Marinades, sauces (we see you, Honey Jalapeño Grillin’ Glaze), and even pet foods are also available. Off The Hook Meat Shop

14960 West Indian School Road, #380, Goodyear
This west Valley butcher shop is female owned and operated in the former Ada’s Fish Fry restaurant. Christine Ortega, who opened Off The Hook Meat Shop in 2019 along with her husband Jim Ortega, has been in the butchering business since 1982, while the shop offers meats from the Greater Omaha Packing Co. The menu lists poultry, pork, and beef options, including chicken breast, turkey wings and drums, pork butt, St. Louis ribs, rib-eye steaks, briskets, ox tail, beef jerky, and more.