But she’s also an evangelist of sorts – promoting walking within a culture driven by transit and exploring walking as an art practice. In 2004, Ellsworth co-founded the Museum of Walking with fellow Phoenix-based artist Steve Yazzie, whose works inspired by hiking in sacred Navajo spaces are featured in his solo “Black White Blue Yellow (BWBY)” exhibition at the Heard Museum.

The Museum of Walking, currently located on ASU's Tempe campus, is the country’s only museum dedicated solely to the practice of art and walking. It touches on several issues at the heart of Ellsworth’s art practice – including illness, physical fitness, and endurance. Ellsworth's own bio describes her work as “art merging with everyday life where public and private experiences collide in unexpected spaces.” One of many habitat views along theWALK route for the Museum of Walking's March 18 event.
Lynn Trimble
Now, Ellsworth is focused on the museum’s largest project to date: a silent 90-minute walk taking 1,000 participants through a portion of the Rio Salado Habitat Restoration Area in South Phoenix. It’s called simply theWALK, and it’s happening from 7 to 11 a.m. on Saturday, March 18.

Participants will traverse a paved trail through a region that’s home to wetland ponds, a mesquite bosque, a cottonwood/willow forest, and several animals – including burrowing owls, beavers, and more than 200 species of birds (including some you’ll hear singing when you visit the museum’s website). 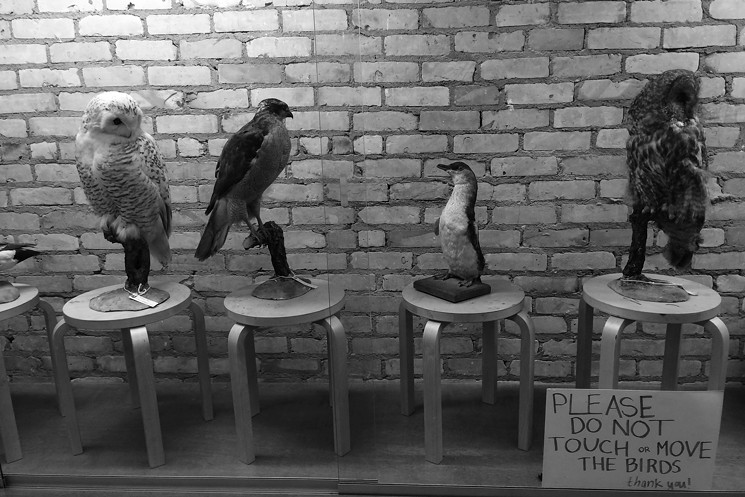 Museum of Walking in residence at Carleton College in Northfield, Minnesota.
Courtesy of Angela Ellsworth
Conceived as a fundraiser for the growing museum, it’s designed to help fund future museum exhibitions, artist honorariums, and research. “This is our inaugural fundraiser,” Ellsworth says. “We hope to have it once a year.”

Proceeds from the inaugural event will also help support the Phoenix Indian School Legacy Project, which is transforming a onetime music building into a Native American outreach center. “Then we hope to interface with groups in South Phoenix,” Ellsworth says. She’s already reached out to Cultivate South Phoenix, an organization that promotes wellness through healthy foods, active lifestyle, and connection to cultural roots. 
Navigating any space with 1,000 people requires some serious logistics, but Ellsworth has theWALK details covered. Walkers will set out in groups of 20 that she calls “waves.” Walkers who buy single tickets will get placed in waves, but people who want to walk together can purchase a wave to assure they set out at the same time. Tickets are $25 for the general public or $15 for students.

Despite recognizing the role of walking and vocal marches in effecting social change, Ellsworth decided theWALK would be more contemplative in nature. Hence walkers will be expected to traverse the space silently during the event.

“There is such a need now for protester voices and change, and all this is really important,” Ellsworth says. ”But there’s also a need for a place where we can return to ourselves, take care of ourselves, and listen to ourselves and our environment.”

For Ellsworth, theWALK is that silent place of listening and community. Angela Ellsworth inside the Museum of Walking's 120-square-foot space on ASU's Tempe campus.
Patty Talahongva
“We live in a culture where there’s a tendency to knee-jerk and respond fast, but what happens if we give a bit of time to think about what we’ve heard?” Ellsworth asks.

Even as she recognizes the role of listening and contemplation in civil society, Ellsworth is quick to contrast the sort of silence she’s promoting with silence that shuts down others’ voices. “My mom was told to be quiet in church,” Ellsworth says.

But this isn’t that.

Ellsworth hopes people from several generations will participate in theWALK, making connections that linger long past events of that one day. “Different generations know different things, and they have different knowledge bases,” she says. But she also hopes it fosters curiosity about the history of Phoenix, including how the Rio Salado region went from riverbed to landfill, and the ways walking is unsafe in certain contexts. Part of the Rio Salado Habitat Restoration Area that runs under a Valley freeway going through downtown Phoenix.
Lynn Trimble
It’s all part of Ellsworth’s expansive art practice, which spans from studio to community. “There’s rich context all over the place,” she says of working in an urban environment surrounded by desert landscapes.

“I love making objects; that’s my quiet time. But being in the world and being challenged by the world enhances how I think about life,” Ellsworth says. “I think and live in the world as a gift, and I learn a lot from this city.”

TheWALK takes place Saturday, March 18, from 7 to 11 a.m. Tickets are $25 ($15 for students). Get details and tickets on the Museum of Walking website.