It doesn’t take long to get a feel for the humor of Jayson and Jaymes Khademi, brothers and owners of Saffron JAK, the flatbread pizza food truck and now Persian bakery/café in North Phoenix. The JAK comes from the brothers’ shared initials, Jayson explains, so they’ve been toying with the idea of having a public, brotherly pizza-making throw down and calling it “the JAK-Off.”

The Khademi brothers are stone-faced serious about bread, however. Not just any bread – a Persian flatbread called sangak that, in order to be considered authentic, needs to be made in a specialty oven, of which there are roughly 30 in the entire United States, according to Jayson Khademi.

The sangak oven inside Saffron JAK is the only one in the state of Arizona, the brothers say, and it set them back somewhere northward of $50K. It’s worth it, the brothers agree. Before owning their own bakery, which opened in December, they used to drive from Phoenix to Los Angeles once a week to buy sangak to make the flatbread pizzas on their food truck, and they did it for nearly four years. 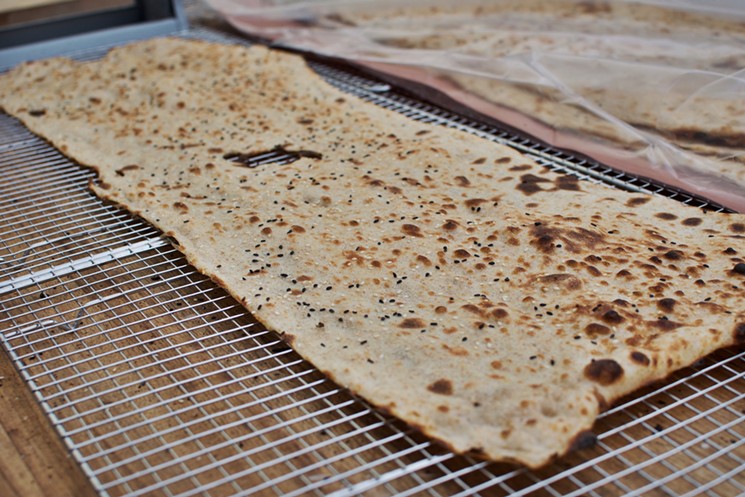 In order to be considered authentic, sangak bread needs to be made in a specialty oven. Saffron JAK's oven is the only one like it in Arizona.
Stephanie Funk
We’re talking around 150,000 miles traveled for bread alone.

Sangak is comprised of humble ingredients: flour, yeast, water, salt, sugar. What makes it distinct is the cooking surface. A thousand years ago, the Khademis explain, the Persian army carried small stones as they traveled. At camp, they’d lay the stones over hot coals, and then dough on top of the stones, giving the finished bread its characteristic crags and valleys. (“Sangak” means “little stone” in Farsi.) Though traditional bakeries in Iran still use real stones in the cooking process, current-day sangak ovens, like Saffron JAK’s, have beveled cast iron bottoms to simulate the stone cooking surface.

“You can’t replicate it anywhere,” Jayson says. The sangak is as chewy as any French loaf, with varied points of crispiness and softness along its wavy topography. It’s hearty, with whole-wheat flavor, a touch of wood smoke, and lots of sesame. 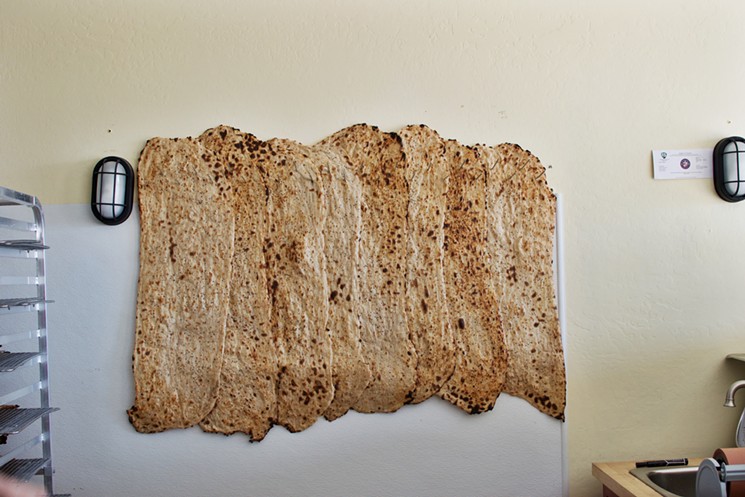 Fresh loaves of sangak bread are hung up on the wall at Saffron JAK, just like in a traditional Iranian bakery.
Stephanie Funk
“The Persians take this stuff very seriously,” Jayson says. He has memories of growing up near Persian communities in Southern California, in which self-designated “bread sherpas,” as he calls them, would make pilgrimages to sangak bakeries, purchase as many loaves as possible, and then disperse them among family and friends.

People who are familiar with this ancient bread have been surprised to find it in Phoenix.

“I’ve had old Persian ladies come in and try the bread and they just eyeball me the entire time like, ‘who the hell is this guy?’” Jayson says. “Because I’m American, I don’t speak Farsi, I’ve got tattoos behind my ears and long hair ... Persians are very protective of their food culture.”

The Gram pizza at Saffron JAK is baked mushrooms and whole cloves of sweet roasted garlic on sangak bread crust.
Stephanie Funk
Growing up, the Khademi brothers’ father often used sangak as the crust for impromptu homemade pizzas. This memory became the inspiration for the Saffron JAK food truck that Jaymes and Jayson started in 2013.

“Making this pizza is very nostalgic for me,” Jaymes says, added to the fact that the Khademis knew no one else in the state would have this flatbread.

“One of the reasons why we chose pizza for the food truck was because it was a way to use something that was ancient and loved in our culture, something that we grew up with, and turn people on in a familiar way,” Jayson adds. 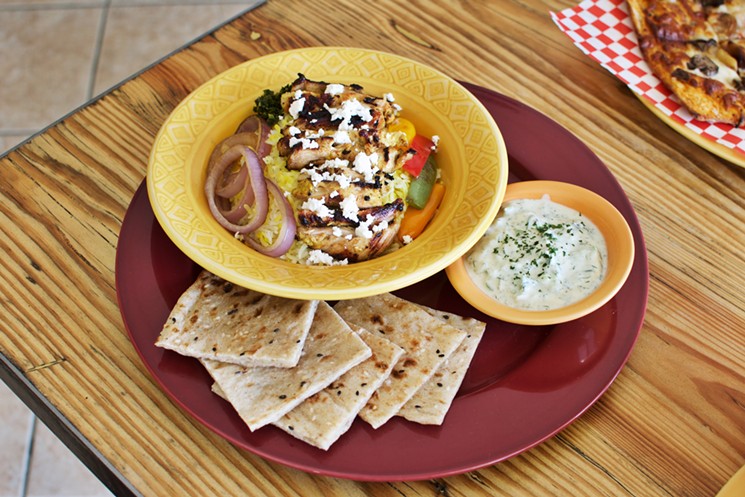 Saffron Chicken is Saffron JAK's take on traditional joojeh kebab.
Stephanie Funk
Now that they have a brick-and-mortar spot, the Khademis have expanded their menu beyond pizza to include more approachable takes on other classic Persian dishes. Instead of joojeh kebob, they call a dish Saffron Chicken. Instead of ghormeh sabzi, they call it Braised Herbed Tri Tip (ghormeh sabzi is traditionally made with lamb). They even serve a Persian Burger that uses classic koobideh meat as the patty, served with a whipped feta cheese spread and charred cherry tomatoes and onions.

For dessert, sholeh zard, a comforting, not-too-sweet saffron rice pudding with slivered almonds and pistachios, is tucked behind the deli counter. 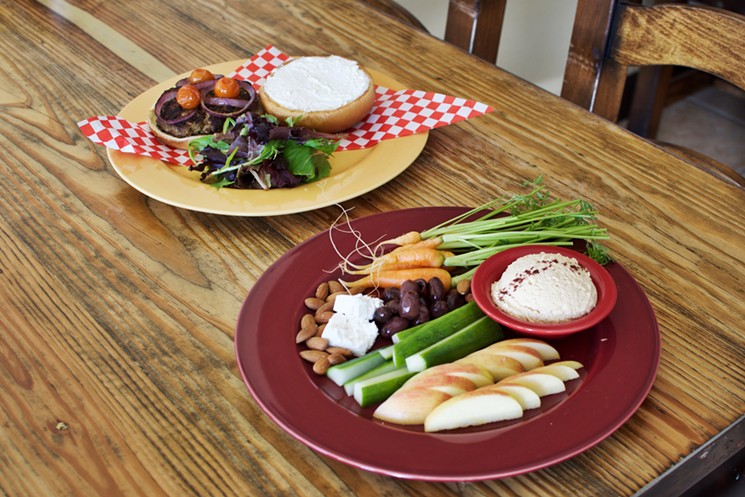 Above: The Persian Burger has a classic koobideh meat patty. Below: Fresh produce grown at St. Vincent de Paul is featured on the hummus plate, as well as house-made olives and Bulgarian feta.
Stephanie Funk
The sangak bread is the star of the show at Saffron JAK Persian Bakery and Café, but it’s clear that everything on the menu has been given chef-driven care. A cursory scroll through Saffron JAK’s Instagram will give you a peek into Jaymes’ various pickling projects, as well as the garden beds they tend to at St. Vincent de Paul. The fruits of both labors, fresh produce and house-made olives, are served in the café’s hummus plate and are also featured heavily on their catering menu.

If you go into the Saffron JAK bakery to eat and buy a loaf of sangak (or a few – it keeps well in the freezer) you might as well pick up one of their frozen take-and-bake pizzas for late night snacking or a dinner for one. The Gram pizza is generous with the mushrooms and whole cloves of sweet roasted garlic.

Even easier: You can order a Saffron JAK sangak pizza on Ubereats without leaving your couch and sweatpants. The Khademis have also started selling their pizzas to smaller Phoenix bars that don’t have full kitchens, like SideBar downtown.

The Khademi brothers recognize that there’s no shortage of pizza in Phoenix. “I’m not trying to make a name for myself in pizza; I want to be a baker,” Jayson says.

“I want to show people that there is culture and there are food options for anything you could possibly think of in this town.”