Prepare to Be Searched if You're Driving to Mexico: U.S. Agents Finding Cash, Ammo

Outbound searches often increase in what officers call "pulse and surge" operations, especially around spring break or the holiday season. In that sense, outbound searches are actually routine.

But not all travelers are aware of the practice, leading CBP to put out a public notice this week to announce that nothing special was happening.

"There has been some concern about travelers being inspected as they head into Mexico and questions as to why," said Pete Flores, CBP director of field operations in San Diego, in a statement released on Monday. "It's nothing new."

The outbound searches "serve several important benefits both for national security and for the local community," the agency states.

"For example, we've stopped fugitives attempting to flee to Mexico, child abductions, and worked with local law enforcement to stop stolen vehicles from entering Mexico," according to CBP. "By stopping illegal proceeds and weapons heading south, we disrupt that criminal cycle."

The program stems from a 2009 crackdown ordered on Mexican drug cartels, which over the years "has significantly increased the cost of doing business for violent criminal organizations."

That may be true, but it's unclear how that has affected the street prices of drugs. Reportedly, the price of heroin, cocaine, and meth has been declining for years as purity has gone up. 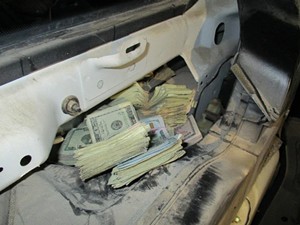 Lukeville CBP officers found $38,000 in a vehicle on Saturday.
U.S. Customs and Border Protection
Searching cars going into Mexico is a good way to raise money for law enforcement: In the feds' fiscal year 2016, almost $7 million was seized along southwest ports of entry, CBP says.

The Lukeville POE, the one used typically by Arizonans on the way to the beaches of Rocky Point, has seized $147,964 in the past six months or so — more than it took in for the previous two years. That includes the finding of $38,000 in cash in a quarter panel of a Ford van on Saturday. Officers arrested an unidentified, 31-year-old Mexican man.

People can take any amount of money they want across the border — but if everyone in a vehicle has more than $10,000 combined, they have to report it.

The officers learn about the hiding places in a wide range of vehicle makes and models, he said.

The Lukeville port recently caught a U.S. citizen from Phoenix trying to smuggle 2,999 rounds of 7.62 mm rifle ammunition in a speaker box. The suspect was arrested by Homeland Security Investigations (HSI).

In 2016, the port seized three handguns and two rifles from crime suspects.

It's not illegal to take a gun into Mexico for personal protection, as far as U.S. law goes. Just be prepared for a nice, long trip to jail if you get caught with it by Mexican authorities.

Most American citizens know they shouldn't take guns into Mexico, but sometimes citizens will declare they have a gun, Bachelier said.

In those cases, CBP officers will check to see if the weapon is stolen, then simply advise the traveler not to chance taking the gun and ammo into Mexico.

If the traveler is caught taking a personal amount of illegal drugs into Mexico, officers notify HSI agents, who will present the case to the Arizona U.S. Attorney's Office for possible prosecution, Bachelier said.

Such prosecutions are known to be rare.

But for smugglers, it's a different story.

On February 11, 2016, Gabriel Rivero, a U.S. citizen, was preparing to cross into Mexico via the Mariposa POE in Nogales.

About 75 yards from the border, a spare tire fell off his vehicle. As video of the incident later showed, he got out and struggled to pick up the tire. When he couldn't lift it, he hopped back in his vehicle and crossed the border.

Officers soon found the tire and the reason it weighed so much — it was loaded with 5,441 rifle and pistol cartridges. Rivero, who was arrested a month later when he crossed into the United States at the DeConcini POE in Nogales, claimed he was to be paid $500 for the smuggling operation.

On Tuesday, he was sentenced to more than 7.5 years in prison.

On Tuesday, officers found $20,000 in cash hidden in a Dodge sedan driven by a Mexican man.

At about the same time, officers searched a Mexican woman's Dodge truck before she crossed the border and found "multiple firearms and associated accessories to include several assault rifles, a handgun, multiple ammunition magazines, two weapon scopes and approximately 6,000 rounds of ammunition."

Both people were arrested.