The Eight Best Concerts in Phoenix This Weekend

Whitney Lee
Peelander-Z is scheduled to perform on Sunday, March 26, at Valley Bar.
Prepare yourself, mortals, the land of Westeros is coming to the Valley this weekend. The long-awaited and much-hyped Game of Thrones Live Concert Experience will bring dragons and sword-slinging characters to Comerica Theatre on Sunday, March 26, for fans of the hit HBO show to enjoy.

It ain't the only invasion of colorful characters that will be happening this weekend, however. The members of wacko Japanese punk band Peelander-Z will unleash weird songs, colorful costumes, and human bowling upon Valley Bar that same evening, likely staging one of the most memorable shows of 2017, if not the most chaotic.

What else does the weekend concert schedule have in store for music fans? Check out our online concert calendar or peruse the following list of the best shows to see over the next 72 hours.

Blues legend Jimmie Vaughan (left).
Jason Wolter
Jimmie Vaughan – Friday, March 24 – Talking Stick Resort
Jimmie Vaughan is the blues guitarist who reinvented "less is more." In his official bio, younger brother Stevie is quoted as saying, "I play probably 80 [percent] of what I can play. Jimmie plays one percent of what he knows. He can play anything." This may be a terrible question to ask a lifelong bluesman, but why only blues? "I play blues and rock 'n' roll," he responds. "People call it different stuff. I just play what I like, what I want to hear myself." The most profound original track of Vaughan's later career is "Six Strings Down" (that, and "Boom-Bapa-Boom"). Its refrain, "Heaven done called another blues stringer back home," from his 1995 album, Strange Pleasure, is a gospel eulogy to his lost brother, who people love even more as time marches on. But for Vaughan, like most blues musicians, the future is mainly about the glorious past. JOSH ALAN FRIEDMAN 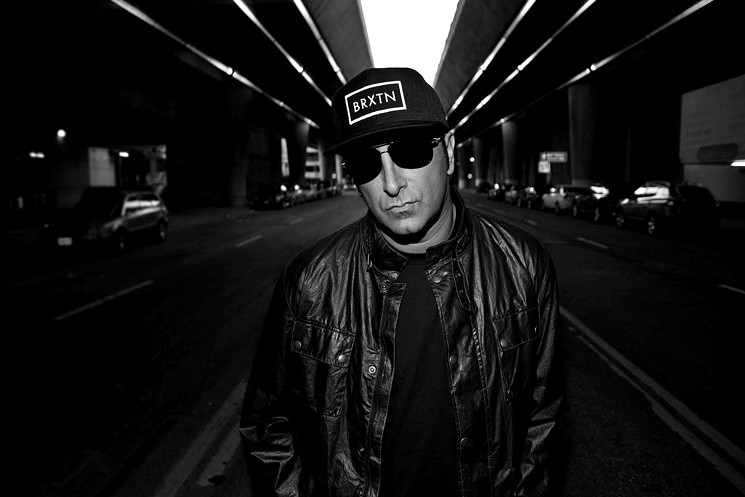 Bad Boy Bill
Courtesy of Paradigm Talent Agency
Bad Boy Bill – Friday, March 24 – Gypsy Bar
The story of DJ Bad Boy Bill (born William Renkosik) reads like the story of house music itself, and namely how this once geo-specific Chicagoan music subculture disseminated itself across the greater American and international cultures to become the mainstream phenomenon it is today. Schooled in the Chicago house boom of the mid-'80s, fledgling DJ Bill first made a name for himself by distributing promo mixtapes out of the trunk of his car. In the future he would become widely-credited as the founding father of the mixtape after an entire generation of DJs caught on to this effective medium of self-promotion by word-of-mouth. Getting recruited by prominent radio jockey and house legend Farley Jackmaster Funk at WGCI Chicago in the late-'80s would land Bill his first of many local radio gigs, where he would hone the rapidfire DJ chops that make him famous today – he often spins up to 20 records in the time it takes the average DJ to mix 5. In the '90s and '00s Bill continued to delight listeners worldwide touring heavily across the globe and releasing a prolific series of compilation records, his five-volume Bangin' The Box series being one of the best selling in dance music history. In the new decade the house music veteran has embraced the new hybrid EDM sounds of the new generation, mixing equal parts house, rock and hip-hop in his sets, and always with his signature banging peak-hour energy. SEAN LEVISMAN

Roger Clyne and the Peacemakers
Courtesy photo
Roger Clyne and the Peacemakers – Saturday, March 25 – Talking Stick Resort
Say what you will about Roger Clyne's talents (which are substantial), when it comes to instigating a party, the native Arizonan is skilled. The stories surrounding the raucous Refreshments shows he was a part of back during the Fizzy Fuzzy Big & Buzzy days have been trumped by the kind of off-the-hook wingdings he hosts as frontman for the Peacemakers. The tequila-soaked "Circus Mexicus" beach blast held in Puerto Peñasco draws thousands of Peaceheads every year, for instance. Suffice it to say, RCPM's poolside performance at Talking Stick in Scottsdale, which kicks off the resort’s run of outdoor shows over the next few months, is likely to be just as action-packed. No opening acts are scheduled, so the band will likely devote the entire evening celebrating New Year's Eve with songs like "Mekong" and "Nada," as well as tales of Mexican moonshine. BENJAMIN LEATHERMAN

International Pop Overthrow – Saturday, March 25 – Cactus Jack’s
The International Pop Overthrow remains one of the top showcases for global bands in the mode of Badfinger, Big Star, the Raspberries and Cheap Trick. Credit for its continued presence on the underground scene goes mainly to David Bash, the Los Angeles-based one-man operation who conceived IPO and continues to oversee its tiniest details without a trace of corporate sponsorship. By the early '90s, with the onset of alternative rock and grunge, few if any bands dared label themselves “pop” any longer. By the mid-'90s, a number of vintage music styles — lounge, swing, surf music, alt-country — had taken root in the alternative imagination. Mod was everywhere in England. In the U.S., bands like Olivia Tremor Control, Apples in Stereo and the Flaming Lips were cutting psychedelic pop albums in the Brian Wilson mode. While dining with a lawyer friend in Sherman Oaks in December 1997, Bash had an epiphany. “I said to my friend,” he recalls, “'I should do a worldwide pop festival as a way of getting all these disparate acts under one umbrella.'” IPO launched that summer and has taken place annually for the past 20 years, including in cities like Portland, NYC, London, Vancouver, Chicago, Toronto, and even Phoenix. This year’s IPO in the Valley takes place at Cactus Jack’s in Ahwatukee and will feature The Redemptions, Carol Pacey and the Honey Shakers, Foresteater, Cheap Hotels, Naked Chollas, Casey James Brooks, Cait Brennan, The Armoires, Dreams and Doorways, Fourbanger, School of Rock Sugar Skulls, and Don't Tell Mom. BRIAN CHIDESTER

Hollywood Alley's Spring Informal – Saturday, March 25 – Shady Park
The renowned local rock bar known as Hollywood Alley, which closed its doors in the summer of 2013, hasn’t physically existed for going on four years now. The spirit of the venue, which hosted a “who’s who” of Valley bands for 25 years, still lives on via a series of reunion events and shows. Organized by former Hollywood Alley bartender Rob “Fun Bobby” Birmingham, who currently works at Shady Park in Tempe, the affairs are typically attended by both the regulars who bent elbows at the Alley and the bands who used to play there. The latest gathering, which is dubbed the “Hollywood Alley's Spring Informal,” will include sets by several Hollywood Alley favorites, such as Flathead, Grave Danger, Fred Green, Fat Gray Cat, Scorpion vs. Tarantula, and the shockingly named Pinky Tuscadero's WhiteKnuckle AssFuck. Mitch Steele, the onetime vocalist of Jesus Chrysler Supercar, will also debut his new band Gladhammer. Also on board for this trip down memory lane are Wyves, U.S. Depressed, Shovel, The Bovine Fury, and Faux Fighters. BENJAMIN LEATHERMAN

Westeros awaits.
Courtesy of Live Nation
Game of Thrones Live Concert Experience – Sunday, March 26 – Talking Stick Resort Arena
Like all pop culture phenomena, Game of Thrones will not allow itself to be bound to one medium. What began as a series of fantasy books written by George R.R. Martin, Game of Thrones was unleashed onto the world of the illiterate through a hugely popular HBO show in 2011. But that was not enough for the fans of dragons, battles, and incest. Over the years, there have been Game of Thrones videogames, conventions, and now, a live concert experience. According to reviews of earlier dates on the tour, the show seems to emphasize the word "experience" as much as it does the word "concert." The TV show's composer, Ramin Djawadi, conducts an orchestra and chorus that play selections of the music that accompanied the many deaths, resurrections, and bare-breasted brothel scenes throughout the past six seasons of Game of Thrones. The stage is divided into three parts: One section holds the majority of the musicians, while the other two areas showcase soloists. For those who have not received a master's degree in GoT mythology and cannot remember which score corresponds to which scene, a massive screen hanging above the players will broadcast images of the Starks and Lannisters battling and embracing (though you will have to subscribe to HBO to see the R-rated material). The live concert experience provides special effects whose descriptions, like the show on which it is based, will be preceded by spoiler alerts. During explosions, flames shoot up from the stage; at times, to represent wildfire, the flames are appropriately green. When the action takes audiences to the frozen tundra of the North, snowflakes fall from the rafters. So although Game of Thrones fanatics might have to wait months for the next season to begin, fear not: This show offers a chance to get your fix of Jon Snow, Tyrion Lannister, and all the other magical and brutal figures of their ever-expanding world. DAVID ROLLAND


Adrian Belew Power Trio – Sunday, March 26 – Crescent Ballroom
Adrian Belew is widely considered one of the most innovative guitar players of the 21st century. Yet, before achieving such acclaim, Belew toiled in a Beatles cover band, an Elvis impersonator band, a Holiday Inn circuit band, and “every kind of unknown band” going. Just 27 years old, Belew considered writing off his musical career. “I might have had to be one of those people who plays music for fun and has an actual job. … Heaven forbid!” he says now. Frank Zappa became his savior when the mustachioed maestro happened to see Belew playing in one of those acts. Too talented to ignore, Belew soon joined Zappa’s band. Belew’s stint with Zappa opened doors, and soon he was playing with the Talking Heads, David Bowie, and numerous other name musicians, before becoming a central force in King Crimson. Belew’s progressive approach to guitar playing, along with his technically challenging songwriting, which powered Crimson, the Bears, and his solo efforts, cemented his reputation as a thinking man’s musician. Belew’s current musical outlet is his Power Trio. Driving, intensely focused, and ceaselessly pushing musical boundaries while reshaping his deep catalog, the result is nothing less than three of a perfect pair. GLENN BURNSILVER


Peelander-Z – Sunday, March 26 – Valley Bar
When it comes to putting on a show, few bands put as much effort into their performances as Peelander-Z. Calling themselves a “Japanese action comic punk band hailing from the Z area of Planet Peelander,” the New York band thrashes out speedy and catchy tunes with titles like “Ninja High School” and “High Five Boy” while looking like they come from another planet. Dressed in color-coded costumes that range from sentai suits to kimonos and monster outfits, Peelander-Z brings an outrageous B-movie atmosphere to their shows. With members putting on tiger and squid outfits, the band punctuates their set with superhero/monster fights, unicycle riding, and even “human bowling.” You haven’t lived until you’ve seen the members of Peelander-Z turn themselves into human-sized bowling balls and pins and roll a strike on each other. You can see their Power Rangers-meet-Kaiju antics live and in person on Sunday, March 26, when they’ll turn Valley Bar into their own personal Saturday morning cartoon show. Local opener Treasure Mammal will warm the crowd up before the human bowling and action comic punking begins. ASHLEY NAFTULE