5 Arizona Breweries to Check Out During Your Next Weekend Getaway

Dave Clark
The patio is where it's at when visiting That Brewery in Pine.
There's nothing quite like the sound of the open road, cranking the tunes and mentally ejecting from the day-to-day working life for a weekend of fun. Phoenix residents love to venture out to cooler spots as the weather heats up, and what better reason to get out of town than to check out a new brewery ... or five?

No matter where your plans take you, we have the perfect Arizona watering hole for you to check out while you're there.

That Brewery
In the Tonto National Forest
3270 AZ Route 87, Pine

Scenic Route 87 is not only a beautiful and easy drive from Phoenix, but it's also something of a precursor to the pot of gold at the end of the rainbow. The sensory overload of pine is hypnotizing, and very similar to the aromas found in many hop-laden IPAs. Pine, citrus, and fruit are key descriptors of an IPA, and that's exactly what any hop lover will be looking for after this drive. That Brewery doesn't disappoint, offering three different varieties of hoppy IPAs along with their pale ale. Located in a small building just past the Natural Bridge State Park, there's even a volleyball court outside. If the weather doesn't agree, there is a full-service dining area and bar inside the building, with classic rock playing on the jukebox. A full menu is available along with a rotating lineup of That Brewery's beers. The Monsoon Mud Stout and Chocolate Creamsicle Porter were the standouts on our visit, with Knotty Nut Brown, Barefoot Pale Ale, and Road Rash IPA also doing the job. 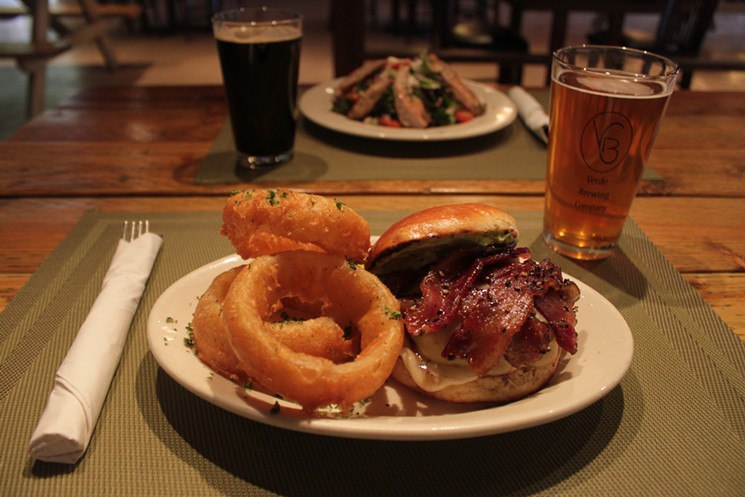 Verde Brewing Company builds on the Verde Valley's agricultural prowess to fulfill their mantra of "Beer for Life." They start the cycle by using local ingredients in their beers. Even their hamburgers are locally sourced. Verde Brewing provides a number of different brews, including two stouts, BullPen Stout (a rich bourbon stout) and Honey Pot Stout. The honey is locally sourced and prevalent in several of their beers. If honey is your thing, they also offer a Honey Brown, a beer with rich toasted malt flavors. It is also a key ingredient in the very popular Off To Jail Pale Ale, both a fan and owner favorite. Copper Canyon IPA and its 90 IBUs will satisfy the hop seekers of Arizona, while Red Neck Rodeo and Saison fill out the current beer lineup. The food menu provides lots of choices from typical bar favorites such as nachos, onion rings, and wings to full entrees, many of which are featured on different nights of the week. Three steak options, salmon, and penne marinara are staples along with a huge list of sandwich and burger options. Nightly specials include the fish and chips on Friday, prime rib on Saturday, and chicken piccata on Sunday. Occasionally, Verde Brewing will feature live music — check their website for up-to-date information on live performances. This is a great spot for someone traveling to or from the Sedona, Cottonwood, or Prescott areas, just a short drive east off I-17. 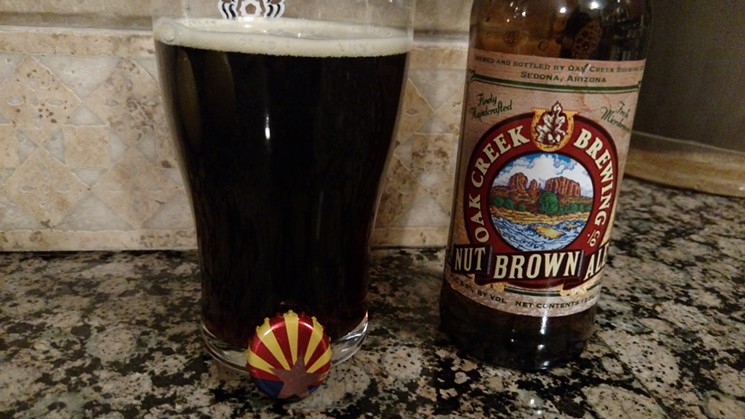 People travel from all over the world to see Sedona's famous red rocks. And the hiking and mountain biking are also some of the country's best. All that outdoor activity works up quite a thirst, and Oak Creek Brewing Company has been satisfying for more than 20 years. Oak Creek's owner is a trained brewmaster and incorporated a rarely used brewing art known as spunding into the production of Oak Creek's beers. Spunding is the process of trapping some of the natural carbon dioxide given off during fermentation and using it to carbonate the beer. This produces a somewhat smoother carbonation that is very pleasant on the palate. Speaking of the palate, the full menu is reason alone to check out Oak Creek and if you're not too distracted looking at the beautiful outdoor sites, you can watch the meals being prepared in the display kitchen. Grab a "fire kissed" pizza or a rotisserie chicken. The beers at Oak Creek have won numerous awards, including the gold lager, hefeweizen and pale ale. But no beer here is finer than the wonderfully crafted Nut Brown Ale, which showcases rich, toasted malt flavors with a hint of pecan-like nuttiness, with just enough hops to balance the malt sweetness and allow the beer to finish crisp. Don't leave Oak Creek without trying at least one. And if you like it as much as we think you will, you can find Nut Brown Ale in bottles at fine craft beer stores all over Phoenix. Located in the historic Tlaquepaque Arts and Crafts Village, you can enjoy some window shopping or maybe catch a live musical performance in the courtyard before or after your brewery experience. 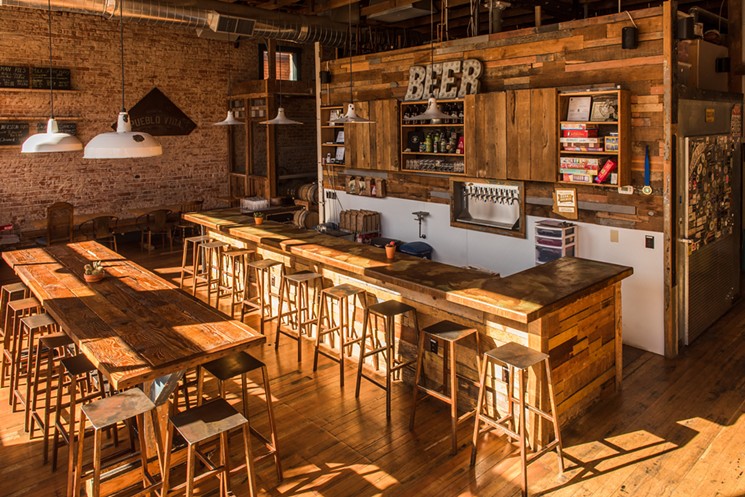 This small Tucson brewery has been getting a lot of buzz in the brewing community, especially for the hop-forward beers. And there are no shortage of hop options to choose from at Pueblo Vida. Four IPAs and two pale ales means hops dominate more than half of the current lineup. Those not particularly hop-savvy need not fear; malt forward options such as the house favorite Bavarian Hefeweizen, the Table for One Saison and the Breakfast Stout (finished with cold brew coffee from a local roaster) give patrons some non-hoppy options. And for those who like to hang somewhere in the middle, the Paradox dry-hopped American brown ale may be just what you're looking for. Pueblo Vida's passion is brewing; striving for quality, uniqueness, and repeatability. The aim of owners Kyle Jefferson and Linette Antillon is to create an authentic beer drinking experience by brewing unique and world-inspired beer styles that are locally crafted with the highest quality ingredients. Pueblo Vida is open seven days a week, and often, Tuesdays are infusion nights where a certain house beer is infused with exciting and exotic spices or other ingredients to give it an entirely new character. Pints and Poses happens on Sundays, when you can do a little yoga before your Sunday day drinking. Hey at least you're breaking even, right? 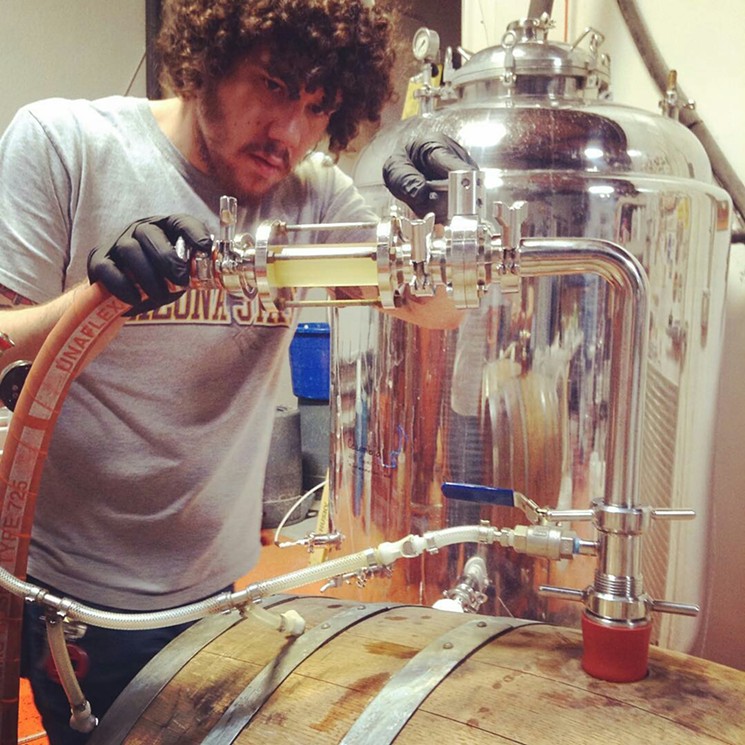 True, the taproom at Wanderlust is only be open Wednesday through Saturday, and this one is slightly off the beaten path compared with other Flagstaff breweries, but the creativity and top-notch beers are worth adjusting your schedule to ensure a trip here is part of your vacation plan. Wanderlust was created five years ago by owner Nathan Friedman with a focus on Old World traditional beer styles crafted with new modern and local twists. Wanderlust constantly rotates seasonal and specialty releases around their three year-round staple beers. Chateau Americana is a Belgian pale ale, highlighting beautiful Belgian malt character with subtle but pleasant hopping, while Pan-American Stout is a vanilla coffee stout made with Mexican vanilla extract and locally sourced coffee. 928 Local is an 8 percent ABV farmhouse ale that is the brewery's flagship beer, brewed with local honey and fermented with a locally harvested yeast domesticated by the brewery. Wanderlust has an extensive barrel aging and sour program, some of which gets bottled from time to time, to their fans' delight. Wanderlust tends to focus on approachable yet unique styles with an emphasis on local first. The consistency and quality control practiced by head brewer Jesse Kortepeter are evident in everything they do at Wanderlust.