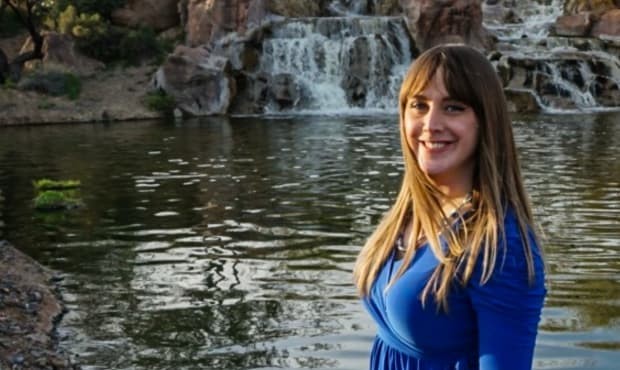 Courtesy of Brianna Westbrook
Arizona’s 8th Congressional District, which includes Surprise and Sun City, has long been a Republican stronghold. So much so that in 2016, the Democratic Party didn’t bother running a candidate against incumbent Trent Franks.

Brianna Westbrook wants to change that. The 32-year-old Democrat, who lives in Peoria, has already announced that she’ll challenge Franks in 2018, despite the considerable odds that she faces as a transgender woman with no previous political experience.

“Honestly, it was Trump that motivated me to run,” she says. “I was never active in politics until this last election. That’s the one thing that I will thank Trump for.”

Very little of Westbrook’s life story resembles a typical politician’s biography. Growing up in Mesa, she lived in severe poverty, she says, eating out of garbage cans and moving from house to house because the family kept being evicted. Several of her family members struggled with heavy drinking and were involved with meth.

When she was 8 or 9 — she can’t remember now — the women in her family decided to pack up and start over someplace new. Her grandmother, aunt, and mother all divorced their husbands, and moved with the children to Tennessee, where they knew absolutely nobody. From there, it was onto Montana, where her grandmother had family, and then Spokane, Washington, where another set of relatives lived.

Her mother remarried, to a man who Westbrook says turned out to be abusive. At 15, she moved out.

She went through high school on her own with little to no guidance, but nonetheless managed to stay out of trouble. Street racing was popular back then, and she ran one of the largest local websites devoted to documenting the scene. When police started cracking down on drivers, she called a local racetrack and got them to open up on Friday night, so that teenagers would have a safe place to race. Anywhere from 80 to 100 cars would show up on a single night, she recalls.

While in high school in Spokane, she met her (now-ex) wife, who gave birth to the couple’s daughter when Westbrook was 19. With a family to support, Westbrook went to work shoveling asphalt.

“It felt like what you had to do, when you get out of high school,” she says now. “Get married and have kids.”

At 22, she moved back to Phoenix so that she could be closer to her grandmother. She quickly found a job at Arrowhead Honda, where she’s worked as a sales manager ever since.

Westbrook came out as transgender at the age of 27, and documented her transition on YouTube, which she saw as a way to prove to others that it was possible. At its peak, her account, which has since been deleted, had more than 5,000 subscribers.

“It was pretty powerful,” she says. “It helped me with real life, too — there’s a lot of keyboard warriors, and it allowed me to prepare myself and know how to react.”

December 31, 2012, was her last day wearing a tie to work. On January 1, 2013, she showed up in a dress. Her boss called in everyone to a meeting beforehand, letting them know what was going on and telling them that there’d be serious consequences if anyone tried to mess with her. No one did.

“I heard rumors that they were sharing pictures of me at other shops,” Westbrook says. “But I never let that stop me.” She kept on being named top salesperson month after month, despite the fact that some customers (incorrectly) assumed that women couldn’t possibly know anything about cars.

Westbrook jokes that her life story sounds like something out of a Lifetime movie. She also believes that it will make her a better politician.

“I’ve been everywhere on the spectrum,” she says. “That’s why I can relate to people. I know how to work hard and persevere.”

Though it’s far from being the only focus of her campaign, she believes that transgender people need to be represented in Congress so that they can fight for civil rights on a federal level. Currently, she points out, only 21 states have legislation in place that protects transgender people from being discriminated against. Only 17 have hate crime laws that explicitly designate gender identity as a protected class. “It’s saddening,” she says.

But she’s equally concerned about making sure people have access to affordable health care, increasing teacher pay and funding education better, protecting the environment, and preserving Social Security and Medicare.

Westbrook won’t be Arizona’s first openly transgender candidate: In 2004, Amanda Simpson, a Raytheon executive and Tucson resident, ran for the State Legislature. She lost the general election, but later ended up being named deputy assistant secretary of defense for operational energy under the Obama administration.

She’s also not the first openly transgender person to run for Congress. Last year, two transgender women, who  both happened to be named Misty — Misty Snow in Utah, and Misty Plowright in Colorado — won the Democratic primaries in their respective districts before losing in the general election.

It's not surprising that both Snow and Plowright were running in districts that typically vote Republican, Don Haider-Markel, a professor of political science at the University of Kansas, says. For transgender candidates, those are often the only places where they'll be given the chance to run at all.

Overall, he says, there's not many transgender candidates running in local, state, or national races. One reason is that they represent a relatively small segment of the population. Another is that they tend to wait to reveal their gender identity until after they've been elected, as gay and lesbian candidates used to do.

Interestingly, he notes, the 8th District was once represented by Jim Kolbe, a Republican who came out in the 1996 and won re-election that same year. The district's boundaries have since been redrawn to make it more heavily conservative. And Arizona has a significant history of gay officials being elected to the state legislature, which could bode well for other LGBTQ candidates.

For her part, Westbrook says she isn't concerned about whether or not being transgender will affect her campaign.

“I decided to run before I knew that anyone who was transgender had done this,” she says. “I don’t see any challenge as running as an openly trans candidate. I’m just like everyone else, and I just see it as normal life.”

Being relatively young and inexperienced will be the biggest obstacle she faces, she believes.

Getting her name out there is sure to be a challenge. Franks, who has been in office since 2003, is well-known to his core base of conservative voters. Without much money to spend on a campaign, Westbrook has been focusing on going to legislative district meetings, networking with LGBTQ groups and civil rights activists, and building a social media presence.

She isn’t naive about her chances, and says she’ll try again if 2018 isn’t her year.