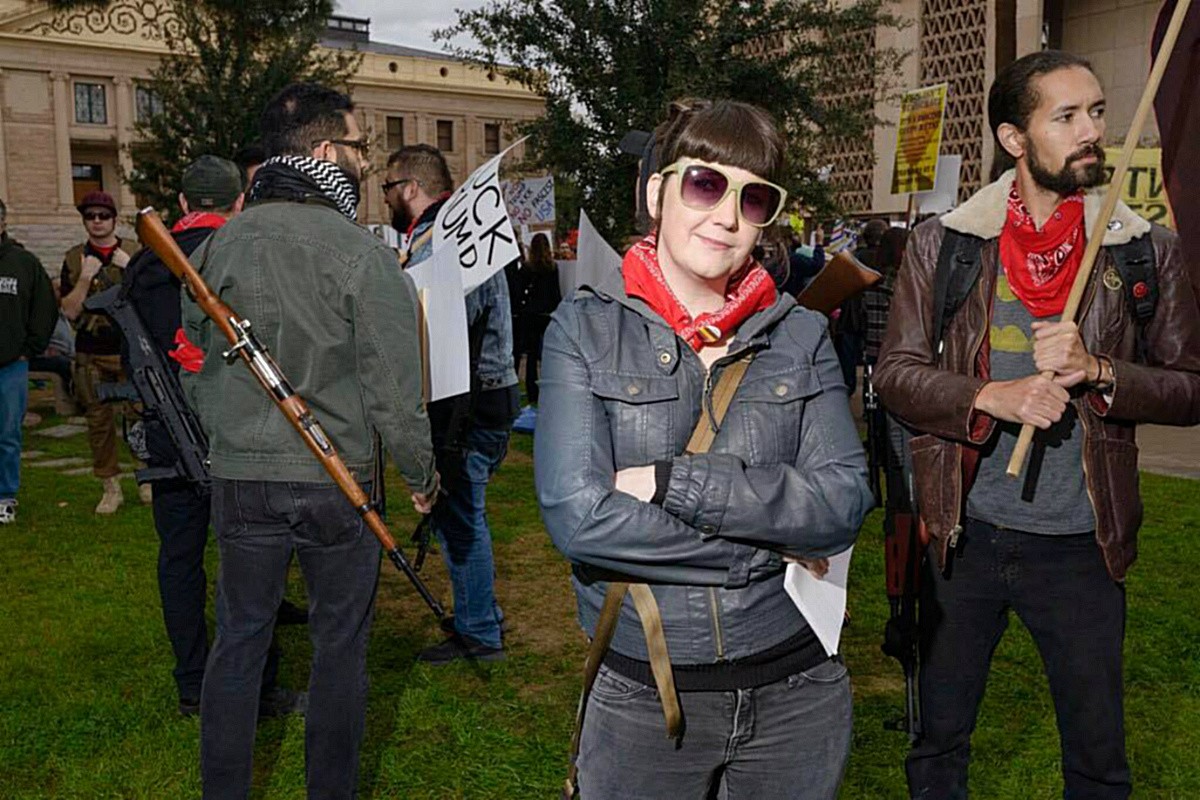 Beth Payne laughed out loud at the suggestion that the AR-15s and AK-47s she and other members of the Phoenix John Brown Gun Club were toting a week or so back at the Arizona Capitol were AirSoft replicas of the real thing.

“They do make AirSoft guns that look like real guns,” Payne, 35, said during a recent interview at Phoenix’s Fair Trade Cafe. “But it seems like a stupid way to get shot by a cop, waving a gun that’s a toy.”

This conjecture emanated from right-leaning critics following a Facebook Live video I shot on March 25 of 40 or so radicals with rifles, who were counter-demonstrating at a pro-Trump Make America Great Again march that ended on the lawn of the state Senate.

The footage went viral, bolstered by links from prominent conservative sites, such as The Daily Caller and Glenn Beck’s The Blaze. It also caught the attention of far-right militias, Oath Keepers, Three Percenters, and various so-called “patriot” groups.

The Russian government-supported RT network did a segment on it, and conspiracy maven Alex Jones’ Infowars.com picked up the story.

Online, the right-wing crowd outdid itself denigrating the leftist assembly — which consisted of members of the John Brown Gun Club, as well as a contingent of the Arizona Brown Berets and members of Antifascist Action Phoenix, the local “antifa” outfit, dedicated to “bashing the fash,” as one antifa motto goes.

Some online firearms fans swear that the group’s long guns were, in fact, plastic pellet-shooting replicas, with their distinctive orange tips removed, but Payne found this idea ludicrous.

“I just don’t see any strategic or tactical reason to have fake guns at an open-carry [event],” Payne stated with impeccable logic. “This is Arizona. It’s not that hard to get a gun.” 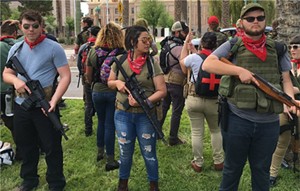 On March 25, left-wingers totin' semi-automatic rifles showed up at the Arizona Capitol to oppose a pro-Trump demonstration.
Stephen Lemons
Payne informed me that there are John Brown Gun Clubs in other states, and that all of them operate under the banner of a network called Redneck Revolt, which intends to reclaim the word “redneck," while standing up for the rights of all laborers.

Initially, Redneck Revolt began as a blog run by JBGC member Dave Strano, an anarchist activist who previously has operated out of Kansas and Colorado.

Our sister paper in Denver, Westword, has written articles about Strano’s work organizing protests against police brutality in the Denver area, and has identified him as a leading member of a group called Anarchist Black Cross.

Strano is the bearded guy in sunglasses and a black baseball cap with whom I exchange words in the video.

The group did not want me to film them with my iPhone after the demonstration, and at one point, Strano suggested that he and the others would not be responsible for what happened to my phone if I continued to film and follow them, as I had been doing.

Since both Redneck Revolt and I have published our respective accounts of what went down, rehashing the day’s events is of little value.

Yet, during the interview, I felt the need to ask Payne about statements Strano made in a 2009 YouTube video, where he seemed to endorse the willful destruction of property during an anarchist protest of a G20 summit in Pittsburgh.

“Political concepts shift,” she told me. “Context shifts. We find different things that we find affinity with. Does the John Brown Gun Club engage in any of those things? No.”

Though both Strano and Payne — an intelligent woman with black Bettie Page-style bangs and a rapid-fire delivery — strike one as natural leaders, Payne maintained that the JBGC and Redneck Revolt, in true anarchist fashion, have no leaders.

Payne also said that she is acting as the group’s spokesperson because other members are not as public as she is and are concerned about “Nazi trolls” and employers firing them for their political beliefs.

A prominent Phoenix anarchist, Payne and other members of an anarchist collective calling itself Carpe Locus were the subjects of a long, syrupy article in the Arizona Republic a couple of years back.

During my contentious encounter with the group, Payne reminded me that I had interviewed her previously for New Times. But she was in sunglasses with what looked like an AK-47 slung across her chest, and I didn’t recognize her till later.

The current incarnation of the Redneck Revolt began in June, according to Payne, as an effort to confront racism and as a form of community defense.

She said their 35 or so members train with their guns weekly and represent a range of viewpoints. 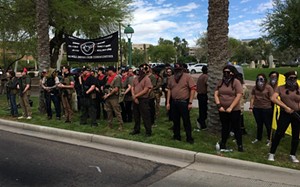 To online critics suggesting the JBGC's weapons were fake, Payne said it would be stupid to risk getting shot by a cop for "waving a gun that's a toy."
Stephen Lemons
“We have folks that are Libertarian, Republican, communists, anarchists,” she claimed. “It’s a melting pot of ideologies ... I would say the people we have the least of are liberals.”

Despite this melange of beliefs, she conceded that most people would regard the group as being on the left of the political spectrum.

Faaaar left, by my reckoning.

Members of the group dress like they just stepped out of historical photos showing anarchists, communists, and others battling fascists during the Spanish Civil War.

Communist imagery appears on the personal websites of some JBGC members. And the red bandannas they tie around their necks emulate those worn by West Virginia coal miners during a violent 1921 labor uprising known as the Battle of Blair Mountain.

Their list of principles on the Redneck Revolt site include statements against capitalism, white supremacy, the nation-state, and “the wars of the rich,” while advocating for the “right of militant resistance.”

Yet, Payne cited the group’s work tabling at gun shows as an attempt to find common ground with right-wing militia members. Both the JBGC and militias are wary of the federal government’s power and cherish their rights under the Second Amendment.

This gives Redneck Revolt a “foot in the door” with the patriot types, Payne avowed.

Sure, both sides like to play with guns, but a Grand Canyon-sized chasm divides them.

For instance, the black banner JBGC unfurled at the Capitol declares that they seek liberty for all working people, including “trans and queer,” refugees, migrants, people of color, and “Muslims and Jews.”

In other words, not folks with whom militia and patriot types wanna cuddle.

Payne seems to agree with the maxim that an armed society is a polite society.

“If anything, the fact that both groups know that the other group has arms keeps things much less threatening,” she said.

March 25 was not her group’s first time out, and it will not be the last, she insisted.

But isn’t this an escalation, I asked?

“I don’t think we’re escalating,” she replied. “We weren’t the first ones to show up armed at a political event ... We’ve had militia showing up at leftists’ events for years.”

But judging from many of the comments to the video and to my initial report, there are many right-wingers eager for a shootout with Payne and her comrades.

And this is what worries me: two ideologically opposed camps, each heavily armed and warily eyeing the other.

Payne said her side will not fire the first round.

“It seems pretty obvious that if someone actually pointed a gun at us and intended to fire on us, we would respond,” she said “We’re not going to die to prove a point.”

You know, like abolitionist John Brown, the inspiration for her group, did so long ago.

I mean, with two crews of amateur gunslingers facing off like the OK Corral, what could go wrong?