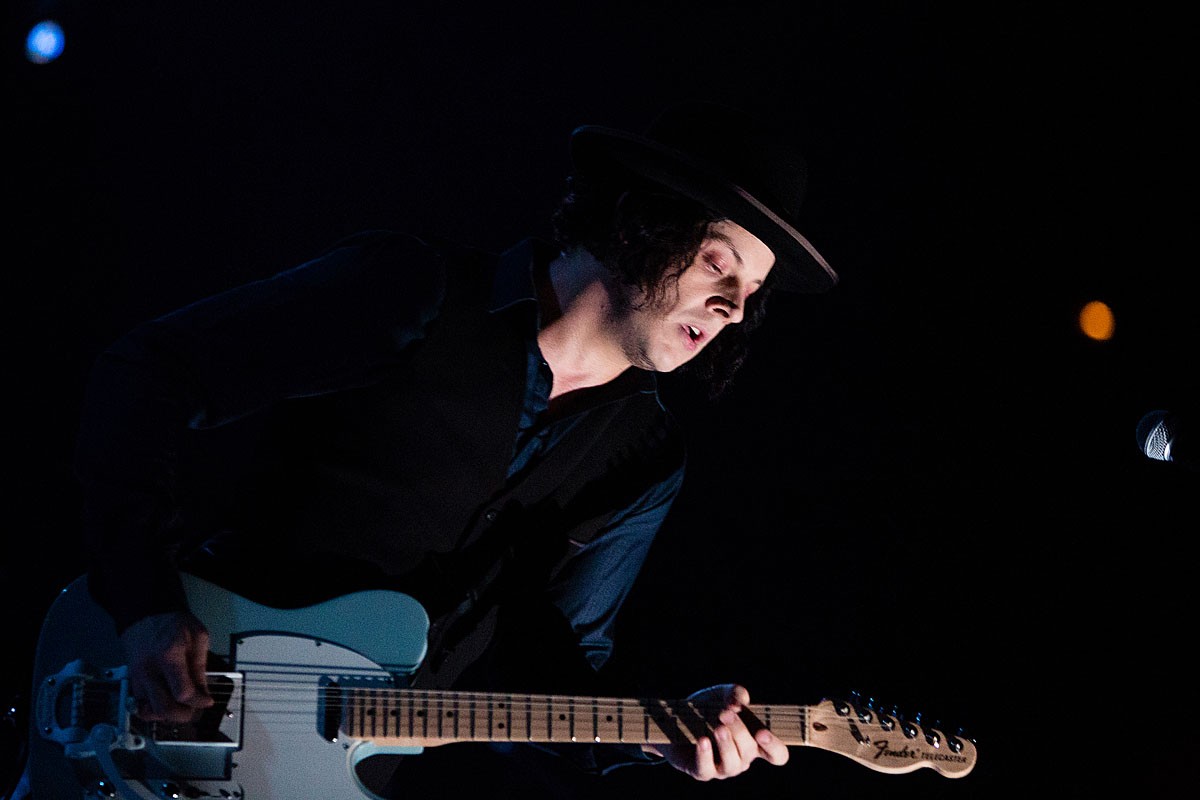 Mat Hayward / Shutterstock.com
Let's start with Jack White, shall we?
You would think ferreting out the 10 guitarists who have been lauded far beyond their abilities would be an easy task. After all, there are only a dozen or so guitar gods we can name off the top of our head. And out of those 12 string , you always can find a reason why the deified aren't all that and a bag of picks. We thought so, too — and then realized that not only are these guitarists the most overrated, they also run the risk of being the 10 most maligned overrated guitarists.

So let's examine the reasons why these guitarists are consistently named among the most overrated and whether there are underlying non-musical reasons for earning such a label.

Jack White
Why he's a guitar god: The man behind The White Stripes, The Raconteurs, and Dead Weather makes a lot of overrated guitarist lists for one simple reason: He is the most visibly famous mainstream guitarist on this side of the century divide. (Sit down, Patrick Carney, don't make Jack White want to fight you again!) His guitar god status profile catapulted even higher with his appearance in the documentary It Might Get Loud. In it, White, alongside a cow, is able to construct a guitar out of a piece of wood and a nail. It is nothing short of a MacGyver episode.

Why he gets a bad rap: His style is certainly influential (White ignited the whole Black Keys feud by suggesting they ripped him off, a kind of reverse interpretation of "Ebony and Ivory"). But we think he gets a bad rap for making it fashionable to put bass players out of work. That and the fact that he beat up that guy from The Von Bondies. And because his rider banned bananas backstage.

The Edge
Why he's a guitar god: His use of echo is the chief ingredient in U2's monolithic sound — a sound they, as the most popular group in the world for a great many years, ran into the ground with five albums before he decided to get some new stomp pedals.

Why he gets a bad rap: His appearance in the aforementioned documentary It Might Get Loud shows a summit between Jack White, Jimmy Page, and The Edge that reminds you of a Justice League of America meeting where Superman and the Flash compare their abilities to alter the course of time with their superpowers and Batman wanders in to show everyone a new gadget that acts like a from the floor to the ceiling. "Wow, impressive Batman! Go up to the front of the class ad get a gold star." In this clip, The Edge practically admits his left hand is doing less work than the 9-volt battery in his Memory Man.

Jimmy Page
Why he's a guitar god: Page has written more songs that you are not allowed to play in a guitar shop than any other guitarist alive. His groundbreaking layering of guitar tracks always created monolithic soundscapes for Led Zeppelin. He wove acoustic elements into their heavy sound to create "Stairway to Heaven," a slow number that gave teenagers eight minutes to make out at high school dances and also laid down the template for the power ballad.

Why he gets a bad rap: collecting Aleister Crowley memorabilia, supposedly making a pact with Beelzebub that doomed the group, and descending into heroin addiction that made for two less-than-stellar final albums: Presence, where he explores variations of the "Woody Woodpecker Theme" on at least three songs and In Through the Out Door, where John Paul Jones takes over on synth and Page sounds barely awake. Since then, Page and the Zeps have amassed a rep for stealing ideas, from the electric guitar violin bowing on "Dazed and Confused" (a schtick that Eddie Phillips of The Creation was doing in 1966) to outright song theft, starting with the song "Dazed and Confused." The Yardbirds covered that one with Page when it was the Jake Holmes song "I'm Confused." Then there was pilfering the works of Willie Dixon ("Whole Lotta Love," "The Lemon Song") and Spirit (a jury found that Zeppelin hadn't infringed the copyright of Spirit's "Taurus" but that verdict was appealed in March 2017 because the jury was not allowed to hear the two songs), to name just two. Even the Doobie Brothers could mount a case that "Trampled Underfoot" bears an uncanny melodic and lyric resemblance to "Long Train Running." Of course, that song-stealing isn't all Page's doing, but upon seeing John Paul Jones playing "Black Dog" to perfection on lap steel during one of his solo concerts, you almost wonder if the credit Page gets for inventing some of Zeppelin's signature licks is disproportionate.

Billy Gibbons
Why he's a guitar god: After Gibbon's first band, The Moving Sidewalks, opened for Jimi Hendrix in 1968, Hendrix went on The Tonight Show with Johnny Carson and said Gibbons was "America's best young guitar player," which went a long way.

Why he gets a bad rap: As one of America's best old guitar players, he has recycled riffs for ZZ Top since their MTV renaissance. It shows very little unless you want to count the furry guitars, which are a disappointment when you first see them do "Legs" live and realize the fuzzy guitars are not going to spin completely around. Come on, we have the technology!

Slash
Why he's a guitar for Destruction is many a young guitarist's with the rock gods of the '70 and the grunge of the '90s. The opening riff of "Sweet Child of Mine" is one of the first licks anyone picks up a guitar learns how to play.

Why he gets a bad rap: Many fans blame Slash's heroin addiction for derailing Guns 'N' Roses. You know things are really bad when Axl Rose is giving you an ultimatum. But when people on guitar forums dismiss him as an Eddie Van Halen copyist in a top hat, it makes us just want to say he's Buckethead without the sponsor tie-in.

Read on for Eric Clapton (obviously) and others.