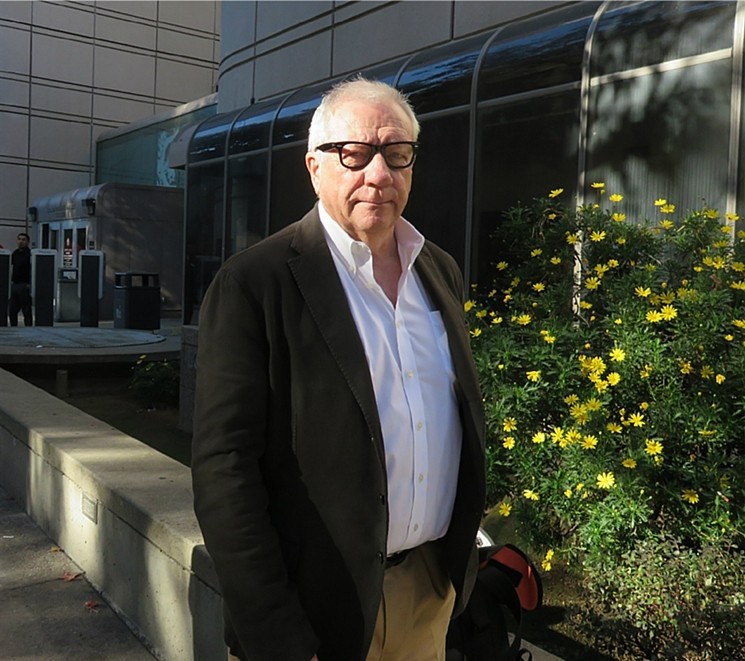 Stephen Lemons
Mike Lacey, co-founder and former owner of Phoenix New Times, still battling for freedom of speech despite being slimed by Backpage's foes.
As their legal woes mounted, the founders of the online listings giant Backpage.com doled out a bunch of moolah to folks who can do them absolutely no good whatsoever.

That’s the genius premise behind a recent stick of copy published in the Arizona Republic with the unwieldy title, “As allegations increase against Backpage, founders have become big political donors in Arizona.”

It took three Cronkite School reporters and one journalism prof to write this drivel, which by all rights should be labeled an opinion piece. The big reveal? Michael Lacey and Jim Larkin have given a whopping $162,000 since 2013 to some Democrats.

Yeah, you read that right: A couple of liberal-leaning white dudes donated to the Donkey Kongs, the party out of power.

In Arizona, it’s really out of power. Last year, Lacey and Larkin wasted $40,000 to help keep the state Democratic Party on life support.

Of course, for the two multimillionaires — who are fighting bogus pimping and money-laundering charges in California, and who have been under the microscope of a federal grand jury in Phoenix for months now — $40K is chump change.

Spent, sadly, on chumps. Contacted by the Cronkite crew, party leaders blubbered that they couldn’t give the scratch back because they already had spent it. But they will amp up their vetting of donors in the future.

What, these losers never heard of Backpage before? Apparently, this was the first Congressman Ruben Gallego ever had heard of it. Like Captain Renault in Casablanca, he was shocked — shocked — that $2,600 from Lacey ended up in his campaign coffers. So he’s re-gifting the cash to a homeless shelter.

Initially, Congresswoman Kyrsten Sinema seemed like she had more stones, and balked at letting go of the $10,600 Lacey and Larkin donated to her campaign over a three-year period.

But soon, she, too, rolled like a barrel of jellyfish, promising to hand off the money to others.

I asked Lacey what he thought about the Republic story. He responded via e-mail.

“Why yes, we did give money to help elect good public officials,” he wrote. “The next thing you know, our mothers will be accused of giving birth to us.”

He added that they sought no public favors with their donations, and received none.

“We also gave money to turn out the vote. After over four decades of covering politicians we still believe in the system. Perhaps our heads need to be examined.”

In fact, Democrats have not been kind to Backpage or to Lacey and Larkin — the two men who co-founded this paper more than 40 years ago, and who sold it in 2012 to company insiders.

Before she became a U.S. Senator from California, Democrat Kamala Harris was that state’s Attorney General.

It was her office that had Lacey, Larkin, and Backpage CEO Carl Ferrer arrested on the spurious legal theory that because some of the ads in the site’s adult section were from or on behalf of prostitutes, the three men could be charged with “pimping.”

That ass-backward notion of blame got those charges tossed by the first judge who caught the case, Sacramento County Judge Michael Bowman, who stated in his final ruling that, “The court finds it difficult to see any illegal behavior outside of the reliance upon the content of speech created by others.”

Bowman, as many judges have before and since, found that Backpage is protected by Section 230 of the 1996 Communications Decency Act, which holds the owners and operators of interactive websites harmless for third-party content.

Without Section 230, the internet as we know it would cease to exist.

Twitter could be prosecuted for giving aid to terrorists for publishing tweets by ISIS followers. Facebook could be charged with the dissemination of child pornography found on its site. And executives at the Republic could be hit with civil suits for defamation, based upon a comment left on one of the paper's articles.

Ironically, in defending their client in state, federal, and appellate courts across the country, Backpage's attorneys have strengthened Section 230, winning precedent-setting rulings and rarely losing.

So far, three states — Washington, New Jersey, and Tennessee — have passed laws going after Backpage and the Section 230 immunity it enjoys. In each case, Backpage challenged those laws in federal courts and prevailed.

Not that it stopped Harris’ office from having Lacey and Larkin — who sold their interest in the company in 2014 — and current owner and CEO Ferrer hauled before a Sacramento court last year in orange jumpsuits and locked in a cage as they fought to be released on bail.

Nor did it prevent Harris from refilling the charges just before she left office and ginning up a couple dozen additional money-laundering counts for good measure.

Yet another Democrat, Senator Claire McCaskill of Missouri, helped lead a Soviet-style show trial of Lacey, Larkin, et al., when current and former Backpage execs were forced to appear before a Senate subcommittee in January for questioning.

McCaskill is the ranking minority member of the Permanent Subcommittee on Investigations, which did not grant any of the execs immunity. As a result, they all declined to answer questions, based on their rights under the First and Fifth Amendments to the U.S. Constitution.

Which is wise, given that their grandstanding enemies assume their guilt. McCaskill, for instance, referred to Backpage during the PSI hearing as “a $600 million company built on selling sex, including sex with children.”

By the time McCaskill made this statement, Backpage had shuttered its adult section, choosing to do so hours before the hearing commenced.

Critics pooh-poohed the move, noting that some of the ads in the adult section have migrated to the site’s personals section, but not all of them have.

No doubt the site has taken a major economic hit.

Also, according to several outlets, including a recent New York Times piece, the loss of the adult section forced prostitutes back into the clutches of their pimps, and onto the street. Cops are quoted as saying that it makes combating human trafficking harder for them.

None of this will convince the fanatics who have pegged Backpage as a convenient scapegoat for the world’s oldest profession, which despite its illegality, most often happens between consenting adults.

They also want to lay child prostitution at the Backpage execs’ feet, which is a vicious smear. The company has cooperated with law enforcement and has a list of accolades from cops high and low to attest to this, as well as the evidence of countless subpoenas answered.

Hell, Backpage eventually turned over thousands of documents and e-mails to the Senate subcommittee investigating it, and what was the worst that the subcommittee found, according to its 50-page report?

Um, basically, that Backpage edited out certain words from its escort ads, like “Lolita,” “barely legal,” “cheerleader,” and so on.

Such editing is protected under Section 230’s safe harbor provision. Would Backpage’s critics have felt better if such words remained in the ads?

One federal jurist who wrote in favor of Backpage, Judge Richard Posner of the Seventh U.S. Circuit Court of Appeals, noted in a 2015 decision that, “not all advertisement for sex are advertisements for illegal sex.”

But the Backpage haters want to kill all adult ads because some involving minors might sneak in.

That's un-American and contrary to the concept of a free society. It also makes it less likely that minors forced into prostitution will be saved.

If only the same fate would befall those who use Backpage as a boogeyman.