Burkett stands accused of ripping off his customers, according to a six-page federal grand jury indictment from February 1 filed in the U.S. District Court of Missouri.

He was picked up and booked into federal custody on Tuesday on an arrest warrant. At a hearing on Thursday, Arizona U.S. Magistrate Judge Michelle Burns ordered him to be released from detention. He's being represented by a federal public defender.

Burkett made a name for himself in the shooting world in the 1990s and 2000s, winning "more than 150 state, national, and world titles," according to a September 2010 article in HandgunsMag.com. He's also known for his "Practical Shooting" series of DVDs, and has taught thousands of civilian, military, and police students as an instructor in the United States and abroad.

Building custom, high-end guns has been his passion for the last few years. But the feds say his business plan involved misspending his customers' money and failing to deliver on his promises.

Burkett founded Predator Tactical LLC, in 2010 with the intent to provide "reliable, accurate handguns capable of performing at the highest levels of competition with a rock solid warranty," his website states.

The "scheme" began in 2012 and continued until recently, the indictment states.

Burkett told customers personally and in advertisements that he could ship them a custom gun within 90 days of their order and payment. Customers were asked to pay the full fee of several thousand dollars per weapon up front.

Burkett "would misappropriate customer payments for his personal benefit without attempting to fulfill the customer's order," the indictment states. He also allegedly misused money from loans and investors.

The single count of fraud stems from Burkett and his company's appearance in a vendor's booth at the 2012 NRA convention in St. Louis.

At the April convention, a customer identified in the indictment only  "P.S." of "Company A" met Burkett and decided a few months later to order some of his firearms. The St. Louis customer ordered five 1911 handguns and sent Predator Tactical a deposit check for $21,653 on July 11, 2012, records state. Two days later, P.S. sent another $11,488 for the balance.

Burkett met P.S. the following week in St. Louis, where they agreed that P.S.'s company would send Predator Tactical $50,000. The customer wired the money a week later and sent a list of the firearms he wanted made. Burkett agreed to deliver one handgun per month to P.S. starting February 28, 2013. 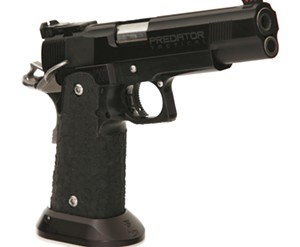 One of the Predator Tactical's products, the 9 mm "Scarab" handgun.
Predator Tactical via Flickr
"However, Burkett has not delivered any of the firearms he promised to P.S.," records state.

The indictment also describes the botched sale of a single gun to a man identified as "J.L.," who met Burkett at the same gun show in St. Louis in 2012.

That customer, Jerry Land of South Carolina, told the Phoenix New Times this week that he was impressed by the 1911s on display in Predator's booth. The "Night Shrike" gun was "good-looking," with an action that worked like "glass on glass," he said. "I wanted one."

In February of 2013, Land paid Predator Tactical a $1,000 deposit, then paid the remaining $2,576.99 balance three days later on his American Express card.

Then he waited — and waited.

"After receiving J.L.'s payment, Burkett utilized the funds to make personal expenditures and deposited the remainder into a personal account," the indictment states. "None of J.L.'s payment went into a business account."

Burkett promised Land that his gun would be delivered within six months. Every time he called to find out what was going on, Burkett blew him off, Land said. That went on for more than a year, until Burkett stopped taking Land's phone calls. He once asked his son-in-law — who didn't know Burkett — to call the company. Burkett picked up immediately, he said.

Land contacted the Arizona Attorney General. But the FBI was apparently already on the case — an agent contacted him and asked him questions about the transaction, he said.

A gun arrived in 2015, two years after Land paid Burkett — and the handgun wasn't what he ordered.

"It didn't shoot worth a damn," he said.

According to the indictment, Burkett didn't begin manufacturing Land's weapon until he after he knew he was being investigated by law enforcement.

Land wrote about his experience in an online forum in 2015, before Burkett shipped him the lower-quality gun.

"Matt had told me early last year that there were 40 customers ahead of me in line waiting on their Night Shrike," Land wrote. "I strongly suspect that they all paid up front and have also not received a gun. Not long ago Predator Tactical went into the shotgun business. Where is the money coming from for this expansion? ... At some point we're looking at fraud."

Predator Tactical via Flickr
Reached on Friday morning at the firm, Burkett denied the allegations against him, said the indictment was full of "incorrect" information, and that he was fighting to keep his company operational.

He'd like to obtain a private attorney but can't afford it, he said.

"I gave up both of my cars — one to my landlord to keep the place open and running," he said. "It's a hellish experience."

Told of Land's comments, Burkett acknowledged he had had problems fulfilling Land's order, but that it worked out in the end.

"The last time I talked to Jerry, he was happy I got him exactly what he wanted," he asserted.

The part about diverting Land's funds to a personal account was some of the "factual incorrect" material in the indictment, he said, adding that he has documentation showing that all the money went into a business account.

The company's not taking new orders for custom firearms, he said, and the website no longer accepts credit cards. He admitted some customers are still waiting for their orders and that he hasn't shipped any weapons since February.

But the shooting ace still has his competitive spirit. He plans to beat the rap and stage a comeback.

"I want to keep this thing alive," he said of his business. "I don't like losing. That's not my thing."

(UPDATE: Burkett pleaded guilty in August 2018, and is scheduled to be sentenced on October 30.)