Taco Summer: The East Side Taqueria That Brings a Bit of Puebla to Phoenix

Patricia Escarcega
For less than $5, you can fill up on an al pastor and carne asada taco at this friendly neighborhood taqueria in east Phoenix.
In the hunt for the latest trendy restaurants, our spotlight often misses neighborhoods that are home to some of the Valley's best kitchens - including those making metro Phoenix's best tacos. Over the next several weeks, we’ll be guiding you toward the Valley’s tastiest tacos, and the taquerías that serve them. Welcome to Taco Summer.
50: Taquería Don Beto

Puebla is a long way from Phoenix — about 1,500 miles away to be more exact — but the culinary influence of this central Mexican state (and its capital, Puebla City) extends far beyond its borders.

You can get a small taste of Puebla here in Phoenix with a visit to Taquería Don Beto, a friendly neighborhood restaurant located near 24th Street on McDowell Road.

Chef-owner Edilberto "Don Beto" Cabrera is a Puebla native and a former textile worker turned taquero. On any given day, you'll spot him slicing meat off the kitchen trompo, wrapping bundles of alambre in aluminum foil, and calling out orders from the kitchen.

Cabrera is fast on his feet, a one-man, taco-making machine, maneuvering his small kitchen with the kind of confidence and elegance earned from years of experience. Watching him work during the lunch or dinner rush is likely to make you feel a little tired.

The view of the Taquería Don Beto kitchen from the dining room.
Patricia Escarcega
Cabrera is passionate about the food of Puebla. His native state is famous as a crossroads of culinary cultures. The most famous of the Mexican moles, mole Poblano, comes from Puebla, but it's also closely associated with French bread (a legacy of the French Intervention of 1863-1867) and cultural mashups like the taco árabe, or Arab-style taco. The Pueblan specialty, attributed to a large influx of Lebanese and Iraqi immigrants to central Mexico in the early 20th century, is made with cumin-marinated pork cooked on a rotating spit, in the style of shawarma. The meat is swaddled in a pita-bread wrapper.

"We have a large Lebanese population in Puebla," says Cabrera in Spanish. "Here people don't know tacos árabes as much."

Back home, Cabrera says, tacos árabes are the go-to fast food snack. Cabrera says he tried "practically giving them away" when he first launched his Phoenix taquería. But in the land of carne asada, not many people were buying.

Today, tacos árabes are still advertised on the restaurant's storefront windows, but you'll no longer find this hard-to-find specialty listed on the menu. Cabrera, though, says he's happy to make them by special request.

Another popular snack that Cabrera says is big in his native Puebla: gringas.

"I don't know why they're called that," laughs Cabrera.

A gringa is essentially a griddle-pressed quesadilla stuffed with lavish amounts of al pastor meat, cheese, and slivers of pineapple. The ones that Cabrera makes are massive, extra-cheesy, and deliriously juicy. Make sure to eat this baby over a paper plate or napkin. 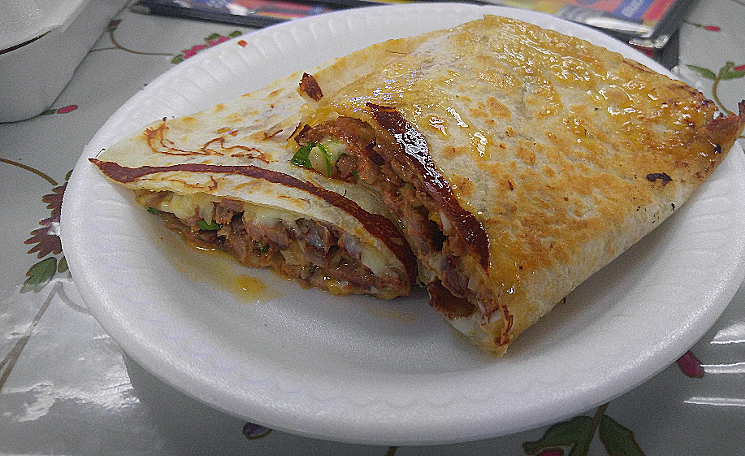 A "gringa" is an al pastor-stuffed quesadilla available at Taquería Don Beto.
Patricia Escarcega
On the whole, the menu at Taquería Don Beto is small. You'll find cemitas — the famous torta Poblana made on a cemita sesame-seed bun — plus burritos, chicken wings, and menudo on the weekends. There's also alambre, grilled beef, bacon, peppers, and onions, lovingly glued together with melted cheese and served with a small stack of corn tortillas on the side for your taco-making pleasure.

As for more conventional tacos, the restaurant keeps the selection tight and focused: just al pastor, carne asada and cabeza. That may explain why there's not a bad taco on the menu at Taquería Don Beto. The al pastor is delivered in juicy, vaguely sweet, flavor-packed little nubs. The carne asada is well-seasoned and a little crisp from the griddle. And it's not a huge exaggeration to say that the cabeza is swoon-worthy, almost as deliriously fatty and rich as foie gras.

Cabrera says he didn't plan to get into the taco-making game, but after losing his job as a textile worker, he knew he wanted to own his own business. He worked his way up from serving gigs, and somehow, he says, he ended up making tacos in Phoenix. We're glad he did. 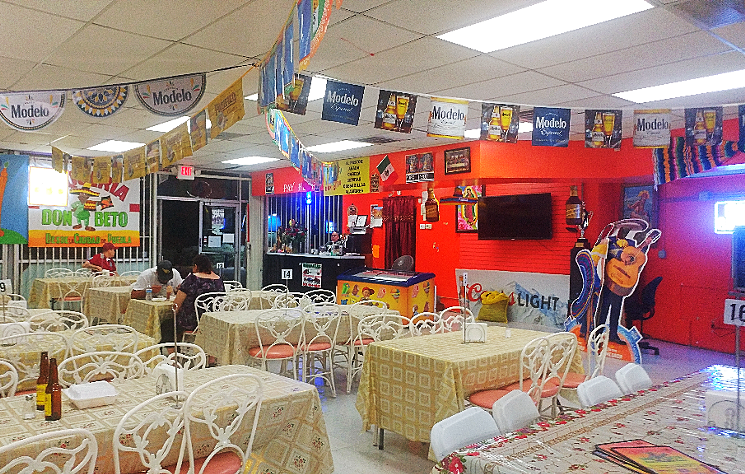