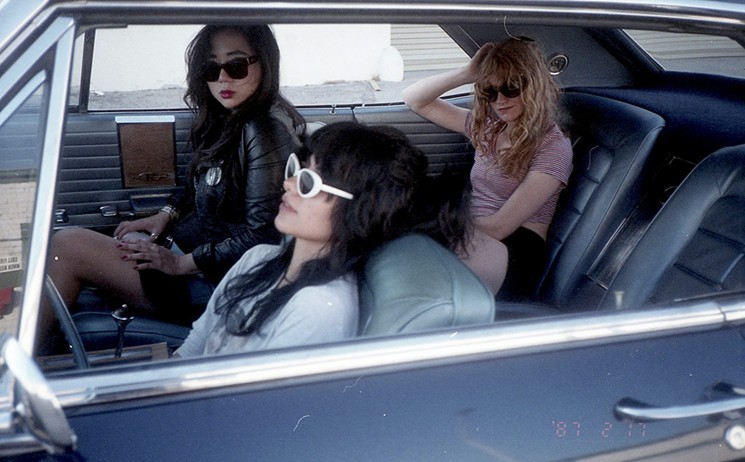 Moni Haworth
L.A. Witch is scheduled to perform on Thursday, May 18, at Valley Bar.
So, did y’all make it out to FORM Arcosanti this past weekend? If not, don’t stress it, boo.

We’ve got plenty of coverage for you to peep, there’s bound to be another one next year, and there are many memorable concerts happening in the near future to help tide you over. And, depending on your particular tastes, that may include some of the shows we've included in our roundup of the best concerts taking place this week in Phoenix.

If you dig metal in either the doom or thrash vein, Pallbearer and Testament are headed to town. Or if you're more into hyphenate acts that deftly straddle genres, there's the psych-by-way-of-garage rock of L.A. Witch, the "hard-to-define blend of indie pop and art rock abstraction" of local artist kolezanka, and the blues-psych-stoner verve of All Them Witches.

Read on for full details about these gigs and others, and don't forget to visit our online concert calendar for even more live music options.

Yes, the kids in Pallbearer are indeed fans of Kansas.
Diana Lee Zadlo
Pallbearer
Monday, May 15
The Rebel Lounge
Being the torchbearer of the modern American doom metal movement can be tough, especially when you list Kansas as a favorite band. It makes sense, according to Pallbearer bassist/vocalist Joseph D. Rowland, who says their progressive tendencies are just as important as their metal roots. "I think we are just as much a prog-rock band as we are doom metal," says Rowland. "We're huge fans of King Crimson, Yes, Kansas ... bands that pushed the envelope. We like telling a story through the music as well as the lyrics." After blowing minds all over the place with their 2012 debut, Sorrow and Extinction, Pallbearer put its songwriting into overdrive. On its sophomore record, Foundations of Burden, the band got even more comfortable with drawn-out epics (most of its tunes clock in around 10 minutes) but also eased up on gloomy lyrics and heavy guitars. Becoming complacent isn't in the cards for Pallbearer, Rowland says. "There are definitely doom bands out there playing more simplistic, heavy Sabbath riffs," he says. "We love Sabbath, but there's more to it than playing the riff from 'Cornucopia.'” Oakland L. Childers

Songwriter and artist Roberto Carlos Lange.
Courtesy of Asthmatic Kitty Records
Crossfade Lab
Monday, May 15
Crescent Ballroom
DJs make smooth transitions using the crossfader tool, allowing a seamless fade from one sound source to another. MacArthur Fellow and music critic Josh Kun gets behind the metaphorical turntables as CALA Alliance continues its collaborative event series Crossfade Lab. The next installment mixes the unique work and experiences of Brooklyn-based songwriter and artist Roberto Carlos Lange of Negro with visual and performance artist Nao Bustamante, whom you might recognize from the Bravo reality show Work Of Art: The Next Great Artist. Kun will moderate an evening of personal discussion, collaboration, and performance with the two virtuosos. Jason Keil

Chris Brown: Love him or hate him.
Francesco Carrozzini
Chris Brown
Monday, May 15
Talking Stick Resort Arena
Chris Brown's record of notoriously nasty Instagram backlash and less-than-flattering relationship choices has not stopped him from producing hit albums. His seventh studio release, Royalty, debuted at number one on the U.S. Billboard charts but received mixed reviews to match the mixed feelings we still have for the controversial talent. Remember the domestic-violence situation, that time he threw a fan's phone, or his jail stint for violating his probation? Yeah, Breezy, we may not have forgiven you just yet. More recently, however, Brown has managed to keep himself mostly out of trouble by taking responsibility for his infant daughter, Royalty, whom he honors on his most recent album. For at least, it seems juggling a full-time music career, raising a child, and flaunting his massive art and car collection on the internet keeps him busy enough to deter any new reasons for changing the radio station when his song comes on. Yet. He'll be in town on May 15 along with 50 Cent, O.T. Genasis, Kap G., and Fabolous. Cristina Jerome

You can sing along with Real Friends on Monday night at the Nile.
Megan Leetz
Real Friends
Monday, May 15
Nile Theater in Mesa
Had they existed in the early ‘00s, it's likely a lot of people in their late 20s or early 30s would have had Real Friends lyrics tattooed on their body. The Chicago group's 2014 album, Maybe This Place Is the Same and We're Just Changing, is full of quotables that tug at the heartstrings and is basically a perfect pop-punk record – sad, but not necessarily pessimistic, full of songs that are begging to be screamed out loud in concert. And they probably will be during the band’s gig on Monday, May 15, at the Nile in Mesa, as will tunes from Real Friends’ most recent album, 2016's The Home Inside My Head. The show will also include sets by fellow pop-punk acts Have Mercy and Broadside, math rock trio Tiny Moving Parts, and emo/alternative band nothing, nowhere. Cory Garcia

All Them Witches
Tuesday, May 16
The Rebel Lounge
All of Them Witches is the title of a fake book that helped drive the plot of Roman Polanski’s ’60s horror flick, Rosemary’s Baby. The band All Them Witches haven’t confirmed or denied whether the movie or its prop is behind their name. But they do have as many layers as the freaky film, along with a dark, exploratory sensibility that provokes a sonic and dreamy disposition in the listener. The Nashville band dropped their first recording in 2012 and have since gone on to prove that they like to rock hard. Their bluesy, psychedelic, stoner mix is simultaneously gnarly and thoughtful. Often, it’s a tour through several styles within one song. “Bulls,” the opening track on their new release, Sleeping Through the War, clocks in just under seven minutes and drives forward with force and, at times, undeniable aggression. It does so while filling the space around it with noisy and trippy peripheral journeys. This new one doesn’t just open big, it goes out with the 10-minute “Guess I’ll Go Live on the Internet.” This bluesy, focused jam is equally driven by appearances from guitar twang, minimal yet haunting vocals, and short, blistering cut-ins by a harmonica. Perfectly unsettling. Amy Young

Still looking for a great show to see this week? Read on for more concerts this weeks, including Testament, L.A. Witch, and René Marie.