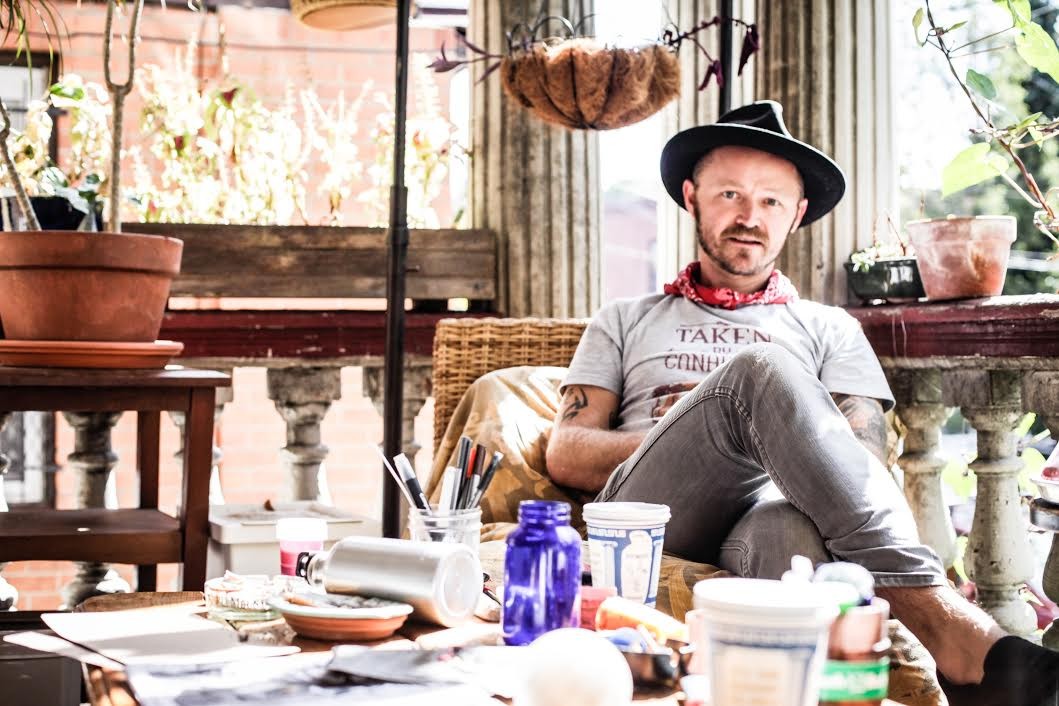 Courtesy of Mescal Porch Collective
Decker on deck.
Just a month ago, Brandon Decker was the subject of a short documentary by Matty Steinkamp called Snake River Blues (subtitled A Documentary of An American Songwriter), which condensed a 23-day tour and the preparation leading up to it into 22 minutes of furious enterprise.

Now, Decker is taking the lessons learned and putting that enterprise to work in the service of other bands whose names don't begin and end with . At a time when his public profile has never been higher and a Brooklyn label called The Royal Potato Family is putting out a compilation of decker.'s previous recordings, he has decided to launch a new record label and band cooperative called The Mescal Porch Collective.

On Friday, June 9, Last Exit Live hosts "a coming-out " party as Decker calls it, the first public introduction to what he hopes to do with and for bands including The Sink or Swim, Mr. Mudd and Mr. Gold,  and The Lonesome Wilderness. Decker projects that all these bands have new vinyl releases coming out this year before Thanksgiving, converging under The Mescal Porch Collective banner. Decker has plans of adding a fifth, as unnamed band to flesh out his vision for the label. Once upon a time, labels were a kind of stamp of approval, an arbiter of taste, something consumers would rely on to curate their own listening habits, something Spotify or Pandora does with an algorithm now. In contrast to the glory days of MTV, music videos (more important than ever as a marketing tool) don't even list the record label as pertinent information anymore.

Is this new venture going to bring back some luster back to labels, shine a light on an unheralded scene, or appeal to vinyl collectors like Sub Pop's Singles Club did in the '90s? Yes, no, and maybe. But not in that order.

The Sink or Swim, doing neither in this photo.
Courtesy of Mescal Porch Collective
"I probably should have a better elevator pitch of what it is that I do at this point," laughs Decker, on a phone call from Sedona, whose red rocks have spelled home for the singer-songwriter the past eight years.

"I've been wanting to start a label for quite a few years and I guess in one way to looking at it is that I'm doing a lot of full label services in some cases," he says. "I hesitate to call it a label, because I'm also actively shopping the bands to labels where applicable. No part of any of it is a contractual binding thing. I'm working in a capacity of some of these projects to facilitate everything except record the music and paying for the recorded music on vinyl or whatever."

For his part, Decker is working with this collective of bands as a booker, publicist, strategist, manager, and label, all depending on what the needs of the bands are.

"I've worked the last eight and a half years exceptionally hard to get the music out," he says. "I've toured 800 dates, recorded albums; it's a type of work I'm extremely passionate about. I don't know where I got the idea to pull these bands together, but as it turns out, I love talking to other bands about their ideas and helping them to connect the dots in their world. Every band's dots are different, every picture they're trying to paint is different. I'm really enjoying the intellectual creativity of wrapping my head around other people's projects and figuring out how we're going to get the biggest impact out of their music as well."

It's something that's been on his mind for a while.

"Mr. Mudd and Mr. Gold and The Lonesome Wilderness I have known and loved for years and had them on our shows," he says. "And I just felt that if things could tighten up for them, they could reach a greater audience, so I specifically reached out to them. and The Sink or Swim came to me after hearing I was doing this work with some of the bands, and I very much enjoyed their outfits. The Sink or Swim are about 17 to 22 years old, really talented, they're all writing three songs a piece every week and just willing to do anything, and it's really inspiring to watch them. They're like my sons."
The Mescal Porch branding experiment began when Decker made his first record in 2009.

"It was kind of a tongue-in-cheek thing to put on the CD spine. Mescal Porch Records is what I called it then," he says. "This was back in the days when you still sent press kits to clubs when you were booking tours. We would be touring for months at a time, and when you don't have anything going online and no reason to be booked, anywhere where you look like you've got something going on, doesn't hurt, I used that smoke and mirrors trick a couple of times. The minute I started using that name, I got more bookings."

That included a club in Eugene, Oregon, which billed him as "Mescal Porch Records Decker." The fake-it-till-you-make-it approach is not without its pitfalls. "I started using an alias for a few years, a fake email address, and I got busted that one time, which was very embarrassing."

Outside of these schemes to appear bigger, Decker has always embraced being smaller.

"On my last album [Snake River Blues] I did a limited preorder of 50, and it sold out and then I did another 50," he says. "Everything was handmade, including the vinyl, handmade and stuff. I've always embraced the boutique side of being small. Instead of feeling like what I was doing was underwhelming, no, this is like a small batch wine run."

One of the secret weapons Decker has in his arsenal is a contact at an undisclosed pressing plant that can do really small vinyl runs, something not available to most bands. Just try counting on one finger the number of indie releases on vinyl you saw on Record Store when most pressing plants were busy filling orders for the big three major labels.

Mr. Mudd and Mr. Gold don't belive in alphabetical order and neither should you.
Courtesy of Mescal Porch Collective
"In this day and age, there are so many bands, so many releases going out, and there's not a lot of money left in labels. The flip side is with the nature of the digital age and Spotify making a lot of sales obsolete, there's been a shift back to vinyl and vinyl is not obsolete. It's a piece of art," says Decker, who eventually brings the conversation back to art over commerce.

"You don't do anything in music trying to get rich. If that's the byproduct, that's great; it's always gotta be the love of the game and the love of the art  first. If I'm able to land any of these bigger opportunities and I'm working on it for all of them, all the better. It's really not a greedy thing. I want to advance bands, and if bands advance faster than me, I'd love to see nothing more."

The side benefit, in abstract terms, in spending five to 10 hours a week per band, is that it takes the focus off , something Decker with the capital D definitely welcomes.

"I'm finding it's significantly helping . I'm way too obsessive," he laughs. "I'll spend 60 to 80 hours a week really getting too deep into . It's like when you meet a new girlfriend, you spend all your time together, and you kill the relationship in three months. It's like that with .  and  spend too much time together. Allowing some of that energy flowing in the places where it is really freely floating [has] been really helpful. Things have been progressing much easier on my decker. stuff. It keeps me excited. Mescal Porch is getting 30 hours a week, but sometimes it's just sitting on a bar patio working on websites."

The Mescal Porch Collective show is also a starting point for , the kickoff show of their first tour, a 16-day trek that takes them to Seattle and back. And it's about these bands coming out under the Mescal Porch umbrella for the first time.

"When I decided to do this, I've kept it on the down low, letting the results of the band's work speak for themselves. It's not about a flashy website or anything [when it comes to] introducing the bands we're working with and getting them excited about seeing different bands of this collective."

The three things Decker is looking at for breaking a band in this day and age? It's what everyone, from writers to record labels, is looking for. "You've got to have a good song, you've gotta be touring and you've gotta have a good story," he says. "U.S. touring is mandatory. I think the video is the most important feature these days, from marketing value, I'm not saying for artistic value, the music is most important, but you're competing with so much stuff on people's Facebook feeds. It's gotta be something people watch. People are not streaming."

Look, no one says wearing this many hats is easy for one head. Two minutes later, Decker comes up with a different top three list of things, this time what an artist needs to survive: longevity, money, and luck.

"I don't necessarily think you've got to be a genius," he says. "Staying in the game is better."
The Mescal Porch Collective showcase featuring Mudd and Mr. Gold, The Lonesome Wilderness, and The Sink and Swim is Friday, June 9, at Last Exit Live, 717 South Central Avenue. Doors are at 7 p.m., and the show starts at 8. Tickets are $5 in advance and $7 at the door.