10 Iconic Arizona Restaurants Worth Traveling For

Kevin Cannon
As a state whose economy and self-image rests on the constant performativity of la dolce vita, dining out is a big part of what makes it satisfying to live in Arizona.

We have our taco stands that grill carne asada into the predawn hours; family-owned greasy spoons open at sunrise with eggs and toast; fresh seafood trucked up from Puerto Penasco; the neighborhood fine dining with organic vegetables; the French; the Italian; the nuevo American; the old style Tex-Mex with the rock and the salt and the cilantro-inflected everything.

True enough that the state — like most of the Sun Belt — also is blanketed with the ezcema of corporate monoculture, marked by so many colored plastic spindles stuck outside like flags announcing the presence of an invading army. And not every locally owned restaurant distinguishes itself; some are downright bad.


Anglos who rushed to exploit gold, silver, and copper deposits in the 19th century at hell-on-wheels camps like Tombstone, Bisbee, Wickenburg, and Oatman brought with them a distinctive Southern taste: bacon, gravy, cornbread, peaches.

Which is why the true survivors deserve special recognition. In the complicated ecosystem of Arizona restaurants, there are a few that have earned iconic status, some through sheer perseverance. Their endurance reflects the appreciation of their communities. Either through the food, the image, the atmosphere, or the connection to local culture, the iconic restaurants of Arizona all “say something” about the surrounding landscape.

They also represent a patchwork of historical influences, for there is no one established “Arizona cuisine.” Not even our Mexican food — arguably our boldest signature to the visitor — has as mature and recognizable a regional distinction as that offered by New Mexico or even Texas.

Certainly the oils, chilies, tomatillos, and meat-holding corn tortillas of the vanished Aztec empire influenced the Mexican table, which in turn drifted north with 16th-century Spanish settlement into the territory that would become Arizona. But the Anglos who rushed to exploit gold, silver, and copper deposits in the 19th century at hell-on-wheels camps like Tombstone, Bisbee, Wickenburg, and Oatman brought with them a distinctive Southern taste: bacon, gravy, cornbread, peaches.


Not until 1973 did an Arizona restaurant win four stars from the Mobil Travel Guide: Tucson’s over-the-top Tack Room, which served haute cuisine with rhinestone cowboy flair

The Arizona “restaurants” founded in the 19th century were little more than crude mining-camp mess halls, where genteel dress and table manners were distant abstractions.

“With an appetite as big as all outdoors, the Southwest eats with gusto. Its taste was early shaped by the sparseness of scrub country, the ‘isolateness’ of mountain and desert,” noted the author of a 1930s guidebook to the region, produced by the federal Works Progress Administration. “The lack of formality that has long characterized its table manners is of pioneer stock, induced by hard living. Of the countless hardships borne in the settlement of this vast region, lack of human companionship was alone insufferable. Eating without formality, then, could satisfy this craving for company better.”

But things have changed drastically since then. There are now approximately 8,500 restaurants in this state that ring up a total $12 billion in sales each year, according to the Arizona Restaurant Association. More new establishments come in every week, from the deep-fried sports bars to the tablecloth-and-candles places.

Tucson writer Gregory McNamee, the author of the forthcoming book Tortillas, Tiswin, and T-Bones: A Food History of the Southwest (from which the preceding WPA quote was taken), said that he was recently driving past Tag’s diner in the time-forgotten cotton town of Coolidge when he fell into a reverie about the recent gastronomic history of the state.

The restaurant must have some age to it: 20 years minimum. It must be a beloved institution within its city. It must somehow speak to a broader cultural theme within Arizona. And the food must be of passable quality.

“You can now live in Coolidge, that is to say, and with a little effort have as many food choices as a New Yorker or an Angeleno,” he wrote in an email. “Downtown Phoenix and its suburbs are jammed with excellent restaurants, while Tucson, named by UNESCO as a City of Gastronomy, has almost too many to choose from, with more restaurants opening than closing.”

Amid all these terrific options, here are 10 of the most iconic restaurants of Arizona — those that have set a tone for all that have followed. Our selection criteria was highly subjective, and adhered only to a few general principles. The restaurant must have some age to it: 20 years minimum. It must be a beloved institution within its city. It must somehow speak to a broader cultural theme within Arizona. And the food must be of passable quality.

This last bit is important, because this certainly isn’t a list of the “Best Restaurants of Arizona.” A truly great restaurant is about so much more than the food. One of the knocks on Manhattan’s famous celebrity-zoo Elaine’s was that the chicken Parmesan tasted like cardboard and the marinara like ketchup. But the customers kept coming, the good buzz didn’t stop, the name became synonymous with a certain side of New York, and the restaurant thereby earned its place in literature. Dining there felt like being a part of something larger. Kevin Cannon
This is possible in Arizona, too.

Readers might not agree with all these choices. They will feel we have ignored gems and elevated greasepits. We made ourselves stop at 10, but there were several close calls: The Stockyards in Phoenix, built by Edward Tovrea next to what used to be the world’s biggest cattle feed lot; The Asylum in Jerome, tucked inside a former hospital and boasting unforgettable views of the Verde Valley; and The Peacock Room at the Hassayampa Inn in Prescott, a rehabilitated Art Deco restaurant in a 1927 hotel close by Whiskey Row.

As every restaurant owner knows, there is no such thing as pleasing every discerning customer. But an essential element of dining out is the conversation, the evaluation, and even the argument over cognac and ice cream. Bon appetit! 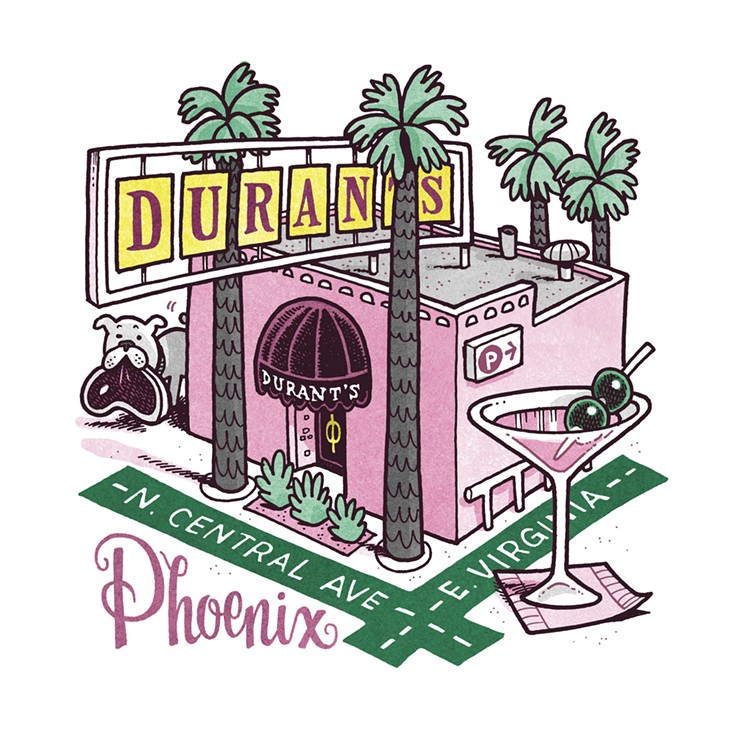 From the vermillion bordello-style wallpaper to the crackly leather banquettes, the efficient red tuxedos of the wait staff, the just-right darkness that gently smothers the angry sun just inches inside the door, and the stiff cocktails, buttery steaks and hard rolls, this place growls with atmosphere. Since 1950, when Jack Durant, a former pit boss at Bugsy Siegel’s Flamingo Hotel in Las Vegas, opened his windowless palace of intrigue on Central Avenue, the restaurant has lain porterhouse steaks and dry martinis before Arizona’s power class. Durant died in 1987, but his spirit still infects the place. He once called his own restaurant “the finest eating and drinking establishment in the world,” and today’s customer is not inclined to disagree. Former columnist Jon Talton of the Arizona Republic made it his regular hangout and occasional inspiration.

“Durant’s has rich history — you walk in the back door through the kitchen like a made man — and everybody who was anybody could be found having lunch or dinner, from governors to Charlie Keating,” he wrote. “On a hot day, the darkness inside was a balm. And the red banquettes took us back to the 1950s.” 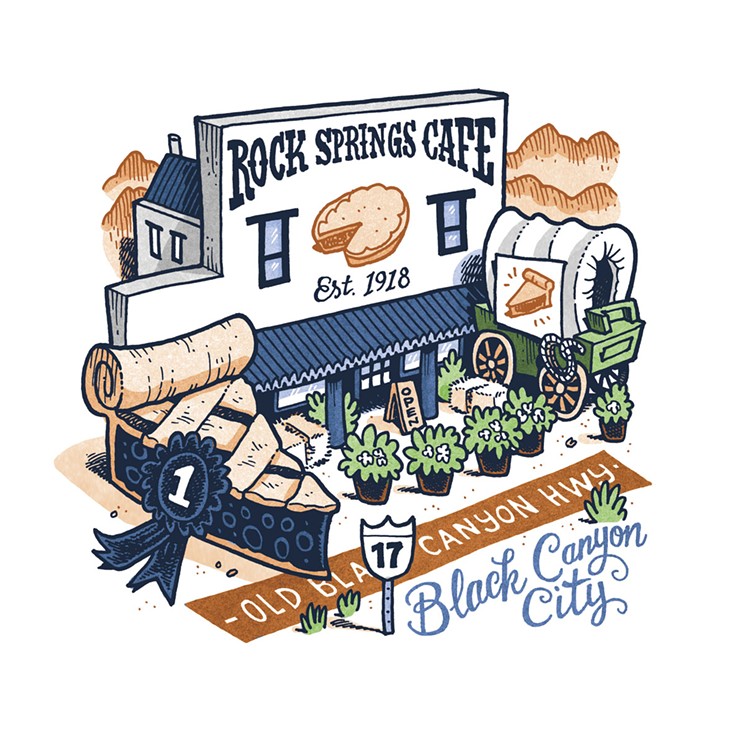 Location counts for a lot, and Ben Warner knew this spot was a winner. It had a natural watering hole used for refreshing horses on the trip from Phoenix to Prescott, and Warner discovered that he could make a lot of money selling gasoline and bootleg liquor to early automobile travelers in the 1920s. The highway planners of the Eisenhower era also smiled on Rock Springs when they located Exit 242 of Interstate 17 not far from the edge of the parking lot of Ben Warner’s 1924 general store and hotel.

Though the interior is a little dingy, the quality and variety of pies make Rock Springs Café a memorable stop. The Rock has its die-hard fans who make it a regular part of their Flagstaff journeys, and also its critics, who fault the crust for its lack of flavor and some of the fillings for a suspiciously frozen-tasting pedigree. But they sling an estimated 80,000 pies a year to the hungry public, along with cowboyed-up staples like Two-Gun Chili and ranchhouse pork cutlets. Volume counts almost as much as a convenient freeway exit. So does history, as 1924 might as well be the Pleistocene era when it comes to Arizona restaurants still doing business. 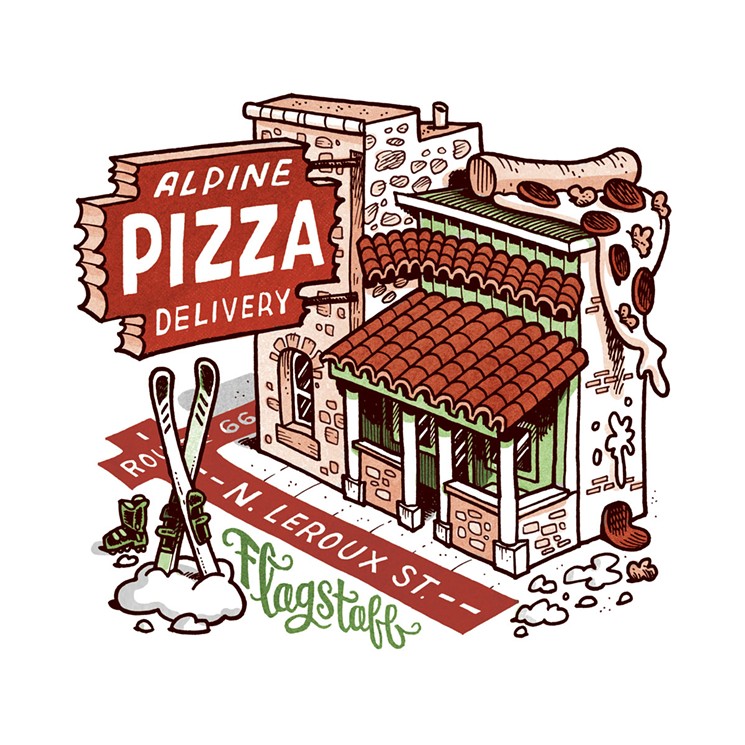 When Danny Rich was hired to run the ski patrol over at Arizona Snowbowl, that prepared the way for one of the West’s truly great outdoorsy hangouts. Rich’s brother opened Alpine Pizza in 1973 with two partners from Chicago, and the fast-talking, fast-moving Rich — a graduate of NAU and the Thunderbird School of Management — keeps the tradition alive with the same original recipes and the sportsman’s bric-a-brac adorning the walls. Look for the TQM Sandwich on the menu, for it contains a sardonic joke in addition to the peppers and mozzarella. The initials are that of an old girlfriend of Danny’s who happened to have a lot of money; she donated $25,000 to Alpine Pizza with the sole proviso that he name a dish for her. When he found out she had been seeing somebody else on his watch, he made her namesake sandwich big enough to feed two. But don’t feel too sorry for him. Photos of champion rock-climber Scott Baxter — a personal friend of Rich — hang on the walls, even though Rich said he stole Baxter’s girlfriend while the latter was off fighting in Vietnam.

In addition to the river guides, ski bums, red rock hounds, and other fleece-covered locals who make the place an après-adventure tradition, look for the wooden booths tattooed with generations of carved-in names. Recently, a 15-year-old girl tracked down the names of her parents, who had met there on their first date, and put her own beside them — the eventual outcome of that union. Rich is nearing 70 but still talks as fast as he skis. “I don’t know what old is in Flagstaff,” he says, complaining only that the messages people have written and carved on his walls and booth have declined since the halcyon literary days of the 1970s. “People who worked for me used to have master’s degrees in English, and what they wrote meant something. Now it’s all just babbling garbage.” 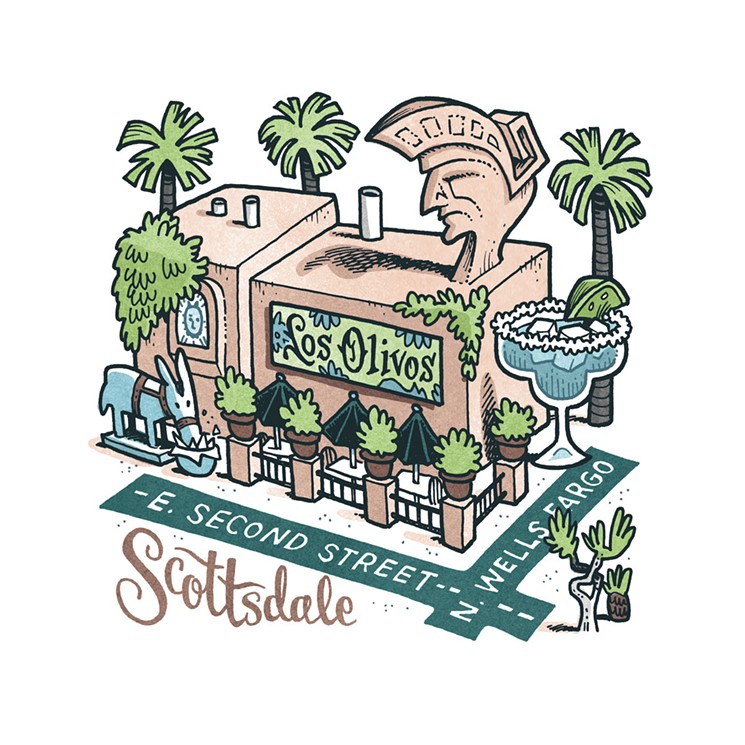 While it may seem that Old Town Scottsdale has been hopelessly mired in faux-Western schlock and kitsch since the days of the Hohokam, it was once a fairly average rural crossroads featuring a grove of olive trees planted by former U.S. Army chaplain Winfield Scott.

All the overpriced junkola began its invasion in 1951 under the watch of gas jockey-turned-mayor Malcolm White, and the more vulgar nightclubs began their own infestation in the 1990s, but an element of a more innocent time survives: Los Olivos Mexican Patio, founded next to a metal shop and named for Scott’s olive trees by the immigrant Corral family — one of the first Mexican families in town — who came up from Sonora to farm cotton. If you’re looking for the classic elements of Yanqui Mexican, you will find them here in generous quantities: chips and salsa, rocks-and-salt margaritas with triple sec, albondigas soup, combo platters with rice and beans. You’ll also have the pleasure of participating in a ritual dining experience known by a vanishing breed of longtime Arizonans.