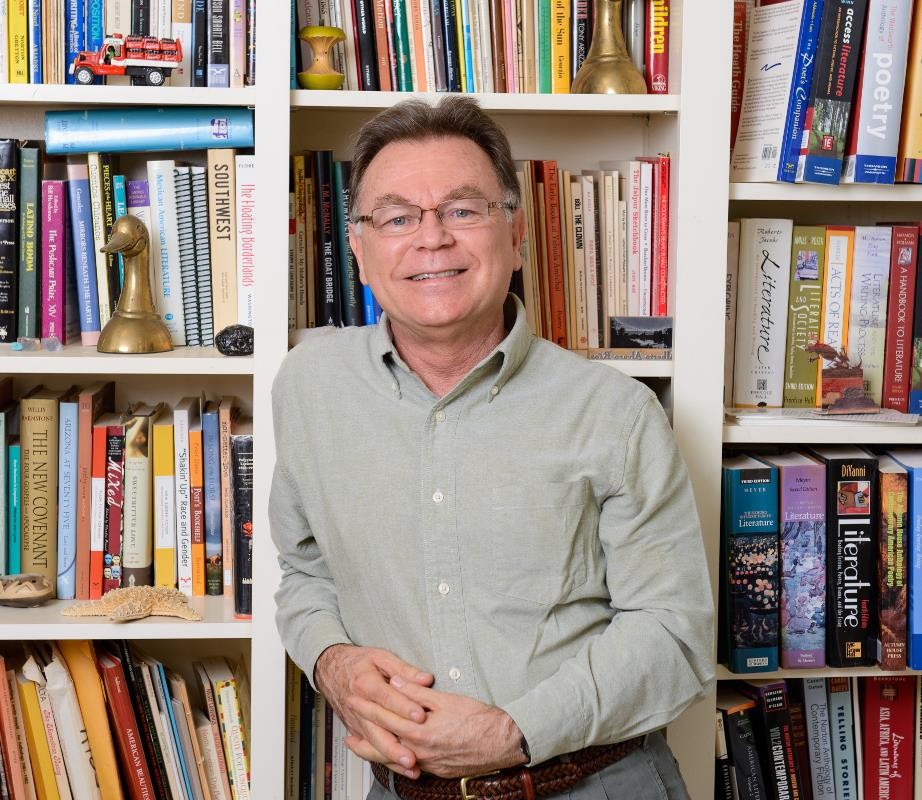 Andy DeLisle/Courtesy of ASU
Alberto Ríos, Arizona's inaugural Poet Laureate.
“It was just thrilling and out of the blue.” That’s how Alberto Ríos recalls feeling when he learned the Irish rock band U2 was using one of his poems on their 2017 Joshua Tree tour. The tour, which is coming to Phoenix this fall, marks the 30-year anniversary of the release of the album The Joshua Tree, which propelled the group to stardom.

A regents’ professor at Arizona State University, Ríos became the inaugural Arizona Poet Laureate in 2013. He’s taught English at ASU for more than 30 years and serves as chair of the English department. Basically, he started teaching at ASU just a few years before U2 released The Joshua Tree.

The band’s original tour for that album launched at what’s now Wells Fargo Arena on ASU’s Tempe campus back in April 1987, and the tour closed that December at Sun Devil Stadium.

Ríos learned that U2 was using his poem "The Border: A Double Sonnet" from his son, whose friend went to go see the band. The friend recognized Ríos’ words on a giant screen before the band took the stage and passed along the news. A few days later, Ríos says, ASU got in touch to let him know U2 had sent them a licensing agreement for its use.

The renowned poet has never been to a U2 concert, but he says there’s a reason his border poem works well in a concert setting. It comprises 28 lines, and each one stands alone as a short poem.

“If somebody reads just one line, they’re good,” Ríos says. 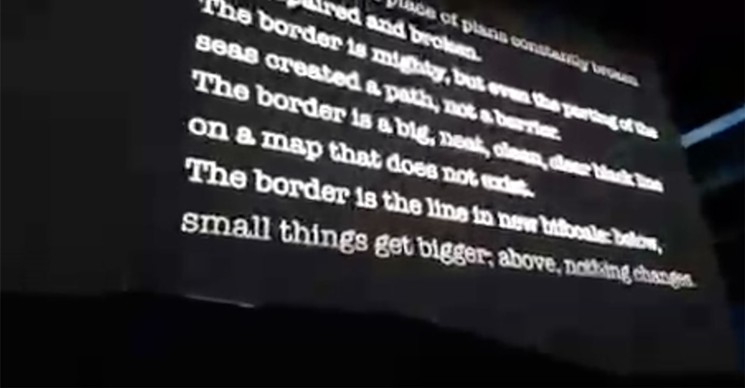 Screenshot of Alberto Ríos poetry on a giant screen at a 2017 U2 concert.
Courtesy of ASU
One-line poems, called greguerías, are prevalent in works by Ramón Gómez de la Serna, a Spanish poet who lived from 1888 to 1963. “They use high drama next to humor, and have resounding depth,” Ríos says. “But they leave people laughing, which allows them to accept their truths.”

You can read Ríos' full poem on the website for the American Academy of Poets. Ríos serves as a chancellor at the Academy, which means he's responsible for being "an ambassador of poetry in the larger world." The poem is also part of Ríos' newest book, titled A Small Story About the Sky.

Playwright James E. Garcia and Ríos wrote a play called Amexica: Tales of the Fourth World, exploring the complexities of family life along the U.S.-Mexico border. New Carpa Theater, founded by Garcia in 2002, premiered the play at Mesa Arts Center in 2011. The play opens with a series of Ríos’ one-line poems.

But Ríos also uses greguerías in other settings.

In 2001, the city of Tempe installed 600 granite tiles into a seat wall at Tempe Town Lake, creating a six-mile-long book that includes several of Ríos’ one-line poems on the theme of water – such as "Water Makes Kings."

“They’re like sparkles on water,” Ríos says of the poems.

It turns out that U2 isn’t Ríos’ only connection to the music world.

He’s worked with David Broza, a singer and songwriter often called the Springsteen of Israel. Ríos recalls making that connection when Broza was just starting out in the ‘90s. “I would start reading a poem, and he’d lift off into a song made from it like an airplane taking off,” Ríos says.

Ríos and Broza have performed together at the Musical Instrument Museum, and a song they co-wrote called "Chileno Boys" appears on the 2011 album A Foreign Affair by jazz fusion band Spyro Gyra.

He’s also worked with several Arizona musicians, from composer James DeMar, whose Guadalupe opera premiered at ASU in 2015, to Reveille Men’s Chorus, founded in Tucson as a gay men’s chorus. 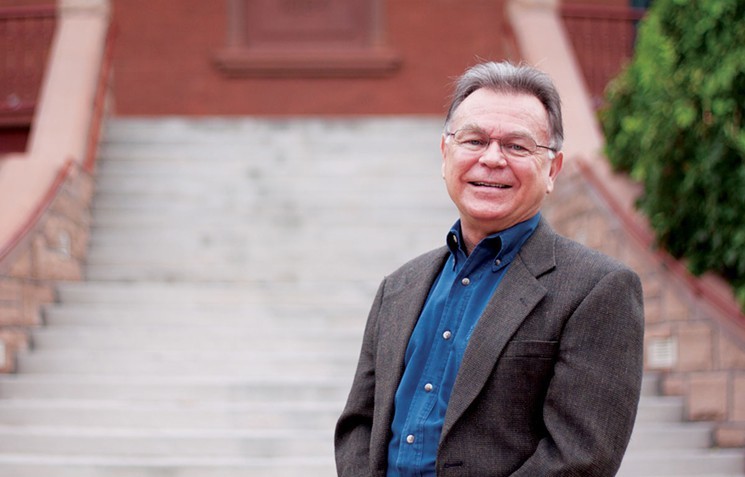 When Arizona Opera decided to perform Arizona Lady, a 1953 operetta set in 1925 Tucson, it called on Ríos and conductor Kathleen Kelly to create a new Spanish-English translation for the German work. It premiered at Symphony Hall in October 2015.

Ríos was born in Nogales in 1952, and says growing up along the border influences not only the way he writes, but also the way he thinks about the world. “I grew up with a dynamic sense of the world, with more than one language and culture,” Ríos says.

“That’s where I got the idea that everything has more than one way to be, including the law, a set of colors, or fruits in the market,” Ríos says of border life. “That’s what gives me vibrancy as a poet, seeing many things in one thing.”

It’s an approach that’s evident in "The Border: A Double Sonnet," which resounds in the context of today’s heated political discourse.

“As I wrote the poem, I used the idea that everything and all of us are different, and that nonetheless we can work together.”

Editor's note: This post has been updated from its original version to note that U2's 2017 Joshua Tree Tour is coming to Phoenix.