7 Things You Need to Know About Havasupai Falls 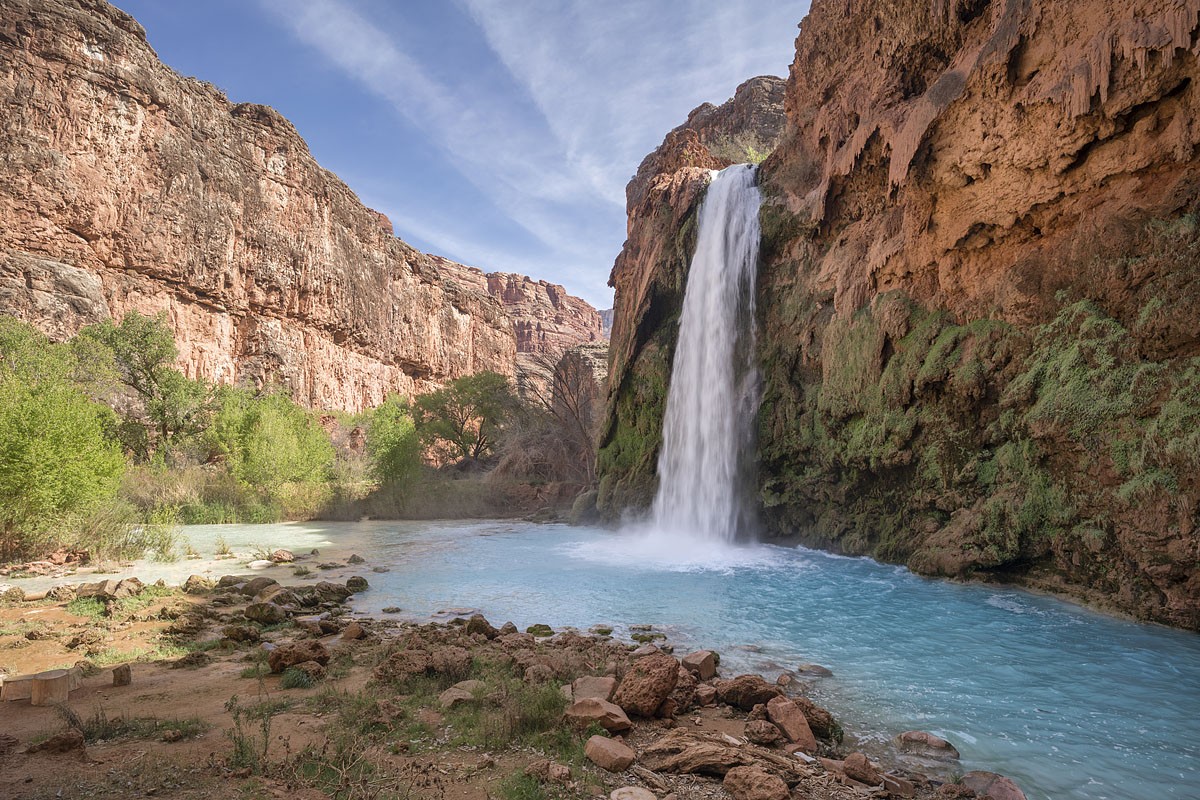 Ryan Kelehar/shutterstock.com
Havasu Falls is located on Havasupai tribal land.
Located near the Grand Canyon’s western edge, 10 miles down in Supai Village, is Havasupai Falls. It's what you might call the Grand Canyon National Park’s carefree little sister. Its name roughly translates to "the people of the blue-green waters," and it's often only slightly cooler than the Valley. But four waterfalls that pour into inviting pools of clear, blue waters turn heat into heaven.

You'll need to put in some forethought and an eight-hour drive for this adventure meets road-trip meets low-budget summer mini-vacation. And the work will be worth it because this is the stuff bucket lists are made of. And if it's on yours, here are a few thing you'll want to know.

Supai Village is at the Bottom of a Remote Part of The Middle of Nowhere
There are no hotels or services 68 miles outside the rim, so you’ll want to plan your trip with precision. There are several options. For instance, you could stay in Flagstaff the night before, and that would make it a two-hour drive to the rim. Or you could stay in Williams, which would lessen the hike-day drive to one hour.

Some people drive from Phoenix to the parking lot at Hualapai Hilltop and then sleep in the car, which we would not recommend due to the bazillion scorpions living on Hualapai Hilltop. But then again, we're ‘fraidy cats.

This is the Wild Wild West
Just getting there is an adventure. There are so many things that you can only experience on this trip. For example, as you approach, the rim of the Grand Canyon is visible from the road. When you arrive at the Grand Canyon National Park, there’s a small city, then the park gates, then a well-organized park, then a parking lot, and then the canyon. Keep an eye out for this unique experience because it’s a chance to discover The Grand Canyon like the pioneers might have — in it’s purest, unobstructed form.

Bring the Kids
Unlike many hikes, including those along the Grand Canyon’s North and South rims, this one is kid friendly. Although it’s scorching hot in the summer, due to the ease of the hike, the partial shade, and the glimmering pools of cold water at the end, Havasupai Falls is a great family destination during summer break. And if your timing is good, a Supai Village man will take your luggage and camping gear down for around $20 cash per bag.

The first two or so miles down are wide switchbacks that aren't overly steep. Then it’s another eight miles of walking at the bottom of the canyon, which is sometimes shaded.

Once you get to Supai Village, there are two convenience stores and at least one restaurant where the food is good — not that it'll matter after several hours of hiking. It takes most groups somewhere around three hours to get to the village. Another two miles of walking downhill gets you to the campgrounds. Arrive early if going with a large group as the sites are limited.

The best part is, if all else fails, you can ride a helicopter up for $75. Once, we did this hike with kids, and one of them too sick to hike up. So we had the thrill of escorting her back to the rim via helicopter. The downside is that tourists cannot make helicopter reservations, and there’s a pecking order which we're at the bottom of (understandably so). So you might have to wait all day.

Water is Key
No matter what time of year you venture down, bring plenty of water and fill up at home or in Flagstaff because after that it is hard to get the nice, fresh stuff until you arrive in Supai Village. And you'll need to pack creatively to take several gallons or so per person. Before you head back however, there is cold water that you can harvest from a spigot toward the head of the campgrounds.

Check the Weather
Do a quick search on YouTube for “Havasupai falls flash flood” and you’ll understand why. With little notice, this section of the canyon is subject to flash floods that have been known to be powerful enough to drown people, animals, and even change the very structure of the falls themselves. Once you get there, create an escape plan and meet-up spot with your group — just in case.

But Wait, There’s More
Although it’s often called Havasupai Falls, which makes it seem as if there's a singular attraction, the area is actually home to four breathtaking falls: Navajo, Havasu, Mooney, and Beaver. Navajo Falls is a 9.5-mile walk from the rim, and you’ll pass it and Havasu Falls on the way to the campgrounds which is 10 miles down.

Then there’s Mooney Falls, which is a one-mile walk past the campgrounds. You’ll need to navigate a narrow and steep trail that ends with scaling a verticle canyon wall ladder. And then there's a short jump until your boots are back on terra-firma. If it makes you nervous, know you’re not alone. We’ve been down it twice and have seen grown men tremble at the descent.

Beaver Falls is another two miles past Mooney. You may need a guide or someone in the know to show you the way.

It's Worth the Wait
You need a permit to camp, of course. Or a reservation to stay at the inn, and there's a lot of buzz about how hard it is to make reservations. Consider it a first-world problem. Call, call, and call, until someone answers and your bucket list plans secured. It will be worth it.