Apple Pie Nachos, Grill-less BBQ, and Other Food and Drink Deals for Fourth of July Weekend

Taylor Jackson/Arizona Diamondbacks
Many Phoenicians will enjoy a long weekend for the July Fourth holiday on Tuesday, or at least an extra day off in the beginning of the week. So we dug through all the deals to come up with our favorite food offerings to keep the day relaxed, low-key, and delicious.

We know a lot of you are heading out of town this weekend. Well, Subway knows it, too. That's why Phoenix Subway Restaurants are offering vouchers for a free one-day children's tickets to LEGOLAND in California, with the purchase of one adult ticket. Grab a sandwich for the road and present the vouchers at any LEGOLAND California Resort ticket booth from July 1 to March 31, 2018, for your free kid's ticket.

The Fourth is a strange holiday for food, especially here in Phoenix. It isn't really a "going-out" holiday, but it is pretty darn hot for a backyard barbecue right now. That's why favorite restaurant specials are the take-away options, like the Bobby-Q "The July Four" six-person take-home meal ($35), which is available on the Fourth from 11 a.m. to 10 p.m. Though really, it sounds more to us like a meal for four hungry adults or two adults and several kids, it's still a helluva deal, including one pound of hand-sliced smoked prime beef brisket, one pound of seasoned pulled pork, six large buns, and a five-ounce bottle of Bobby Q's signature sauce. We suggest adding a few sides and enjoying the feast while you watch fireworks from your air-conditioned car. 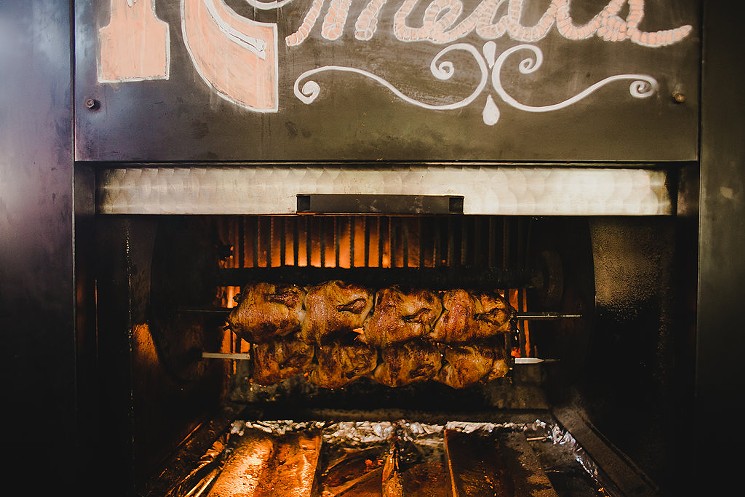 Another great take home option is the killer picnic baskets Phoenix Public Market is putting together. Their so-called Rotisserie Picnic Basket includes one whole rotisserie chicken, slow-cooked over a mixture of mesquite and almond wood, garlic mashed potatoes, broccoli, and sweet corn on the cob, as well as four fresh-baked cookies, four bottled waters, plates, utensils, and napkins for only 25 bucks. The baskets can be picked up on July 4 from 3 to 5 p.m., and must be ordered by 5 p.m. on Monday via email: [email protected]

For those hosting more sophisticated (and air-conditioned) soirees for the holiday, the trending cocktail product, cocktail caviar, is now available at Total Wine & More here in Phoenix. Add some red, white, and blue (okay, they are a little more purple than blue, but it's alright) cocktail pears to a glass of sparkling wine and call it  a day. You're welcome.

Uptown Alley
Keep the Kids Busy with an Indoor Pizza Party
Tuesday, July 4
Before watching fireworks visit Uptown Alley in Surprise to pass the time playing laser tag, bowling, and eating pizza. They are offering an All American Eat and Play Classic for $17.76 that includes one large one topping pizza, four sodas, and $20 in game play. Parents, fear not, they also serve booze.