Shelby Moore
A plate of steak tacos, topped with Los Yaquis' signature bitter, spicy salsa and avocado sauce, goes out to a patient customer.
In the hunt for the latest trendy restaurants, our spotlight often misses neighborhoods that are home to some of the Valley's best kitchens — including those making metro Phoenix's best tacos. Over the next several weeks, we’ll be guiding you toward the Valley’s tastiest tacos, and the taquerías that serve them. Welcome to Taco Summer.

It feels like everyone who knows Taquería los Yaquis loves it — though only a sliver of their patrons actually call the business by its given name.

About a year ago, I remember going to the taquería with a friend, Titus. We wanted to grab some food after a round of drinks nearby. We’d been there together once before, but Titus had been countless times, as he had grown up and gone to high school just around the corner.  But that night, when I suggested we go to Los Yaquis, he responded with a look of confusion. "Where?" he asked. “Los Yaquis,” I persisted. “Taquería Los Yaquis. Right around the corner?” 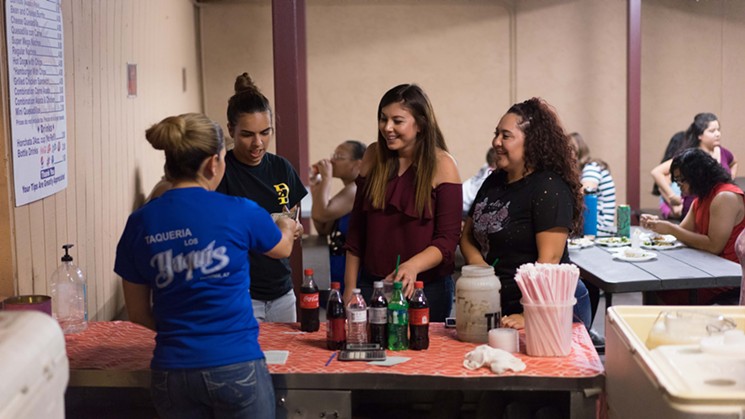 While a party rages on inside Charlie's, diners who line up on the exterior patio often are high school and college students and families who live in the neighborhoods around Melrose.
Shelby Moore
The taquería, which has been operating since 2005, is run out of a clean, white food trailer outfitted with stainless steel appliances and big windows that allow customers to watch line cooks at work.

The trailer is permanently parked outside Charlie’s — not only one of the busiest gay bars and nightclubs in Phoenix, but one of the busiest bars in the Valley, period. Their enormous parking lot is perpetually packed after sundown on the weekends, and the nearby streets fill up as well.

But the location is far from the extent of Los Yaquis' draw. 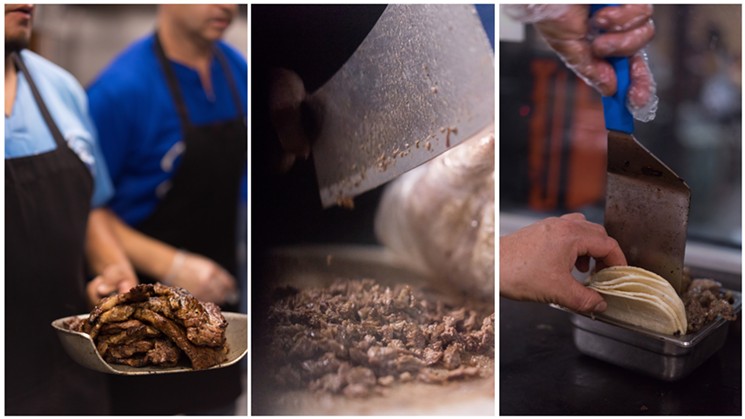 Left to right: Carne asada is delivered to the line, where it's finely chopped, ready for freshly greased tortillas.
Shelby Moore
Every Thursday through Sunday, and especially on Fridays and Saturdays, when they’re open from 7 p.m. until 4 in the morning, the six or seven cooks in the trailer spend their hours frantically dodging each other to grab another fresh stack of tortillas, replenish salsas, and chop freshly cooked steak and chicken with big cleavers at freakishly high speeds. The line of customers is in place from the moment they open until the moment they close, with hungry night owls vying for the chopped-meat tacos, burritos, and meat-topped Super Mega Nachos. Unless specified otherwise, everything gets a lashing of spicy, bitter salsa and cool avocado sauce.

Before the taquería, owner Jose Munoz worked in construction, but he’d always dreamed of becoming his own boss. In 2003, he began making plans for Los Yaquis. He needed a location and, a couple of years later, he happened upon the parking lot in front of Charlie's. At first, he says, he wasn't sure it would be a good place. There was light rail construction bogging down Camelback Road. Nevertheless, they started serving tacos around back in the parking lot.

Then customers started comparing Munoz’s tacos to those they had eaten in the popular tourist town of Rocky Point, Mexico.

“They started spreading the word, ‘Oh, at Charlie’s they have Rocky Point tacos.’” And like a game of  telephone, this is how Taquería los Yaquis got its first nickname, "Charlie’s Tacos." 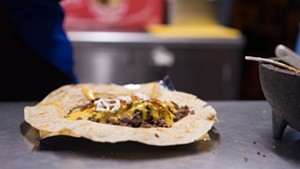 Someone hacked the menu by requesting cheese from the Super Mega Nachos in their carne asada burrito.
Shelby Moore
Part of the name confusion could stem from the fact that Taquería los Yaquis sells their tacos both from the van and through an open square window overlooking the back patio of Charlie’s. The food-truck window attracts families who live in the neighborhoods in and around the Melrose District, as well as Grand Canyon University students and people who have partied elsewhere.

From the bar side, they feed hungry Charlie's patrons.

Co-owner Araceli Olivas, whom Munoz calls the "face of the business," operates the desk where orders come in from both the patio and the bar. Like all employees, she wears a Los Yaquis baseball jersey, the uniform of the Yaquis de Obregón, who play in the Mexican Pacific League in Obregón, Sonora, where she's from. 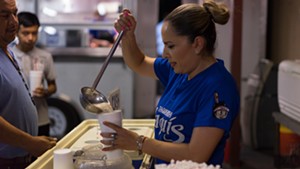 Co-owner Araceli Olivas is the face of Taquería los Yaquis, says her business partner, Jose Munoz.
Shelby Moore
Although there'll always be demand from within Charlie’s for good, fresh Mexican food, the rest of the diners, those who visit the exterior patio keep coming back for their unique style of Sonoran taco, which isn’t easily found in Phoenix.

It’s not only the mad chopping, but the toppings that distinguish the tacos. Instead of onions and cilantro, every tacos gets a dip of the salsa and avocado sauce.

From left: Carne asada and peppers are fired on the grill; Super Mega Nachos, before they're topped with grilled onion, crema, and salsa.
Shelby Moore
“This is the style common to Sonora,” Munoz says. “The reason I decided on it was because I figured that there are so many people in Phoenix from Sonoran and Sinaloa.” He knew they'd be eager to get a taste of this style from back home. But he also wasn't afraid of inventing new dishes, either, like the wildly popular Super Mega Nachos and mini quesadillas.

“The reason we started the Super Mega Nachos was because we use to do catering before we opened [here],” Munoz says. “There were spring training teams coming to town to play baseball, and we were the ones doing the catering. I started to think, ‘What could I make them that they would possibly like, other than tacos?’

“So I came up with the quesadillas and the nachos."

He tops round, generic yellow-corn nacho chips with gooey yellow nacho cheese, then piles on either chopped steak or chicken, along with salsa, crema, and charred onions.

The result is a sort of borderland food, like the Sonoran hot dog, that perfectly blends Sonoran cuisine with American ballpark food.

Munoz is old enough to warrant sitting back and letting the young 20-somethings chop away inside the truck and run the business while he gets some sleep. But that's not his style. Munoz wakes up around noon Thursday through Sunday to run errands and get the truck ready for service, which he oversees all night long.

When service is finished and the sun begins to rise, he and the team share a family meal.

He and Olivas have become fixtures of the taco truck. If Munoz is not there, people in line ask Olivas where “that guy” is. And if she’s gone, even just to take a restroom break, he says, they ask him, “Where is the lady who always takes our order?”

People ask Munoz when he will open up another location, or move to a brick-and-mortar location.

Owner Jose Munoz works Thursday through Sunday, running errands before Los Yaquis opens at 7 p.m. When service ends in the wee hours of the morning, the crew enjoys a family meal.
Shelby Moore
Our Taco Summer picks so far: