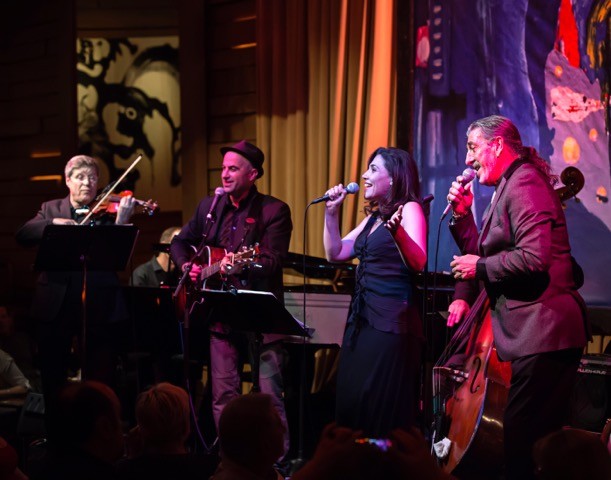 Courtesy of Paris Chansons
Paris Chansons are set to play the Musical Instrument Museum.
Julia Kantor, one of the founders of L.A.’s Paris Chansons, is reflecting on the broad appeal of French pop music. Starting the group four years ago with her husband, Jacob, the Kantors have formed a tight unit of musicians dedicated to sharing classic French songs with a new generation of audiences.

“I don’t know any other kind of international music that has this kind of a reach,” she says.

What’s most surprising about Paris Chansons’ rising profile is their diverse fanbase. The group began as an informal gathering of friends playing famous French songs in cafes. They quickly drew large crowds to each cafe gig, full of more than the usual suspects of French expatriates and American Francophiles.

“We were attracting people from many different cultural groups, like Russians, Armenians, Romanians, Israelis, Lebansese, as well as French people and Americans,” Julia says. “We decided to form this group because we saw how strong an emotional response we were getting from all these groups. They’re singing along and swaying in their seats and connecting to the music in a really deep way.”

That unique mix of backgrounds isn’t just in their fanbase, it’s also reflected in the makeup of the group itself. Julia Kantor hails from Ukraine; Jacob is Russian, and one of the other vocalists, Max Cohen, is Moroccan-Israeli. It’s a group of people who, on paper, seem like an unlikely band to carry a torch for singers like Jacques Brel, Edith Piaf, and Charles Aznavour.

Julia explains that the wide appeal of French music has as much to do with politics as it does with the music’s lush, romantic sounds.

Cabaret music also is a style that lends itself well to translation.

“[Cohen] shared with us that in Morocco this music is beloved,” Julia says. “And in Israel, many of these French songs were translated into Hebrew and became Israeli staples. People grew up with them thinking they were Israeli songs!”

The group has grown over the years. Paris Chansons has three singers (Julia, guitarist/vocalist Jacob, and Cohen), and a backing band that includes Adam Cohen (bass), Jeff Lams (piano), Endre Balogh (violin), and Sinclair Lott (drums). Julia shares vocal duties with her husband, who plays guitar, and with Max Cohen.

Paris Chansons play a variety of French hits, dating back to the 1930s, when songbirds like Piaf walked the Earth, and into the modern era. They also touch on the work of other French pop greats like Serge Gainsbourg and the ye-ye singers of the ’60s, who took Phil Spector’s girl group music and gave it a Gallic twist.
Although the band are dedicated to sharing French classics, Julia says they’re also committed to sharing these old standards in new ways.

“We try to create original renditions as much as possible,” she says. Part of the way they update these songs is with Jacob’s looping pedal and guitar effects, giving their sound an experimental quality. They also try to incorporate other musical influences into their arrangements, adding in jazz textures and pieces of gypsy music.

“We also have original songs that we weave into our sets,” Julia says. Paris Chansons usually play two sets in a single evening, presenting almost two hours worth of classics and original music. For their upcoming show at the Musical Instrument Museum, they’ll have a cultural trivia contest in between sets where trivia winners will get prizes donated by the Alliance Francaise of Greater Phoenix (which is one of the evening’s sponsors).

And although the band’s music strikes a deep chord with a wide variety of expatriate groups, Julia points out that American audiences have also been moved by their chansons.

“For Americans, French music evokes romance and elegance,” she says. “It’s why there are so many Paris themed fundraisers. People want to connect with that feeling of chic sophistication and glamour.”

Paris Chansons are playing on Saturday, July 8, at the Musical Instrument Museum. Tickets are $35 to $45. See mim.org.