Watchu got going on this weekend? If your answer to this semi-rhetorical question involves something about killing time until Sunday’s episodes of either Rick and Morty or Game of Thrones (or both) hit your TV screens, then you really oughta get out more.

Look, we love those shows, too. A lot. But it’s really a shame if you center your entire weekend around ‘em.

There are plenty of other things to do over the next few days that don’t involve the adventures of Rick Sanchez or Jon Snow. Like maybe checking out a concert or dance music events happening around the Valley.

AJJ will celebrate the 10th anniversary of its breakthrough album, People Who Can Eat People Are the Luckiest People in the World, at the Trunk Space all weekend long. The heavy metal heroes of Slayer and Lamb of God are due in town this weekend for gigs, as are Pickwick, country star Sam Hunt, hip-hop duo Shabazz Palaces, and the Lætitia Sadier Source Ensemble.

Plus, there are a couple of EDM superstars headlining pool parties, and Cactus Jack’s in Ahwatukee will attempt to recreate Woodstock, complete with hippie jams and a giant mudslide. No joke.

Details on all of these shows and events can be found in the following list of the best concerts in Phoenix this weekend. And for even more gigs, hit up our extensive online music listings. 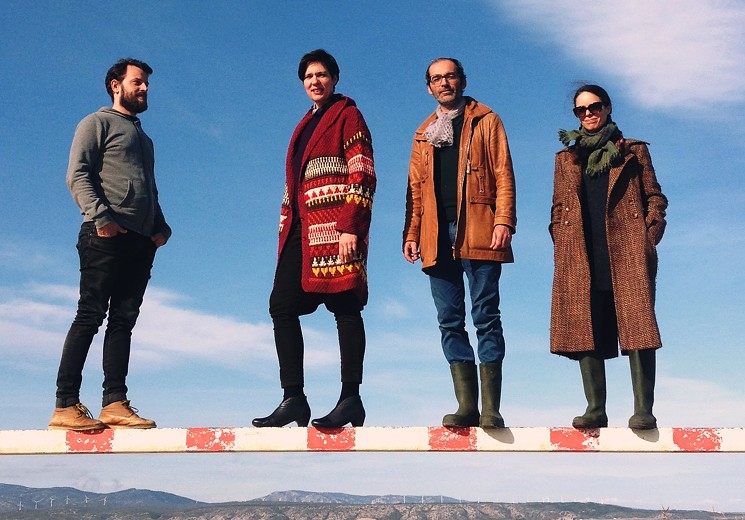 Lætitia Sadier and the other members of her Source Ensemble.
Olia Eichenbaum
Lætitia Sadier Source Ensemble
Friday, August 18
Valley Bar
First with Stereolab, and on her own since 2010, French songwriter Lætitia Sadier has pioneered a fusion of socialist poetry and exotica, making space-age bachelor music for the kind of kids who’ve got red roses in their Twitter profiles. Driven by motorik ticks and charging psychedelia, her songs have always been as lush as they are strident, blending Brazilian tropicália and feathery lounge pop. Along the way, she’s lent her cool, high vocals to like Common and Tyler, the Creator, -electronic acts like Mouse on Mars, and indie rocker Bradford Cox of Deerhunter’s side project Atlas Sound. On Finding Me Finding You, her first album leading the newly christened Lætitia Sadier Source Ensemble, her voice sounds immediately familiar, as does her smooth, synth-dappled sonic framework. Close your eyes during “Psychology Active (Finding You”) right after the fuzz guitar comes in, and you’d be forgiven for assuming you’re listening to a lost Emperor Tomato Ketchup B-side. But Sadier is devoted to progress in subtle ways, and the album finds her oblique polemics fashioned into warm, humanist . “To feel good above all else / Is my preference,” she coos, growing more strident as she sums up the necessity of truly radical mindsets. “Status, prestige, prominence, don’t mean a thing at this time.” Jason P. Woodbury

Ben Gallaty (left) and Sean Bonnette of AJJ.
Erica Lauren
AJJ
Friday, August 18, to Sunday, August 20
Trunk Space
Ten years ago, AJJ released People Who Can Eat People Are the Luckiest People in the World, the Phoenix-born folk-punk band’s second recording. The band formed in 2004 with core members Sean Bonnette (vocals, guitar) and Ben Gallaty (bass, vocals). Different members have contributed since then, and the lineup currently includes Preston Bryant (guitar, keyboards, and vocals), Mark Glick (cello), and touring drummer Owen Evans.
When they kick off a fall 2017 tour in what Bonnette describes as “old-school style, with just Ben and I,” all those supporters will be out in full force. So far, four of the five shows at The Trunk Space, where the tour begins, are completely sold out. The pair will revisit music from that release and more. It’s as meaningful for Trunk Space owner Steph Carrico to have them celebrate People at the DIY venue as it is for the band, their friends, and fans. “In the early days, AJJ played to a room of than 10 people more times than I can count, but they stuck with it and didn’t give up,” Carrico says. “They’ve put in their 10,000 hours, and I’m proud to see my friends experience such success. We are honored to get to celebrate the 10-year anniversary of People with Sean and Ben.” All of AJJ's shows this weekend are sold out, with the exception of the Sunday matinee performance starting at 3 p.m. Better grab tickets while you can, however, since that one's like to be a sellout, too. Amy Young

Country singer Sam Hunt ain't Conway Twitty, nor is he Luke Bryan.
Courtesy of UMG Nashville
Sam Hunt
Saturday, August 19
Ak-Chin Pavilion
Sam Hunt is good-looking. Like, 6-foot-4 and incredibly good looking; think Tom Brady before he got on that weird diet. He’s even got the all-American : grew up in Georgia, played college football (quarterback, of course), even got invited to an NFL training camp. Hunt picked up music after high school. It was viewed as nothing more than a hobby, a way of passing time while pursuing a professional football career. Roughly a decade later, his football career a distant memory, Hunt is a platinum-selling artist and one of the most popular acts in country music. So, yeah, Sam Hunt is unquestionably successful. But is he actually good? To answer that question, we must first clarify one thing. Hunt, contrary to popular opinion, is not a “bro country” type. Whereas artists like Luke Bryan, Florida Georgia Line, and Cole Swindell have found success with tracks about tailgates, tan lines, and Dixie cups, Hunt’s class of country doesn’t really fit into that particular sphere. Unlike the aforementioned Bryan, the unquestioned king of the country bros, Hunt’s brand of country is fairly diverse. While Bryan has made a living alternating between uptempo party tracks and catchy-as-all-hell love ballads, Hunt’s debut features traces of hip-hop, and R&B. Hell, his 2014 album Montevallo features drum machines and turntables. Dude even followed up Montevallo with a mixtape, 2015's Between the Pines. Conway Twitty, Hunt is not. Clint Hale

The late Darrell “Dimebag” Abbott.
Courtesy Dan McNew
DimeFest 2017
Saturday, August 19
Joe's Grotto
doesn't matter if you are a fan of Pantera or not – there's no denying that the late Darrell “Dimebag” Abbott was a natural genius on the guitar. His speedy fingers, twangy blues-meets-speed metal style, and rampaging riffs. There's no doubt that his talent would've progressed much further. That's why every year around the musician's August 20 birthday, heavy metal fans all over the U.S. organize DimeFest. Here in the Valley, it’s taken place the past few years at haven Joe’s Grotto. And at this year’s event, which takes place on Saturday at the venue, expect to see two stages of just about every hard-hitting local musician paying tribute to Dime by way of deep metal grooves, shred- riffs, and powerful vocals. While we can always expect to see some Pantera and Damage Plan jams, I’m guessing there’s some amazing stuff in store for us this year. The lineup includes sets by Autumn’s End, Sectas, Footer, Bleed the Fifth, Sick Black Automatic, Dutch Rosenburg Theater, A Deadly Awakening, Throttlehead, and local Pantera tribute band Cowboys N Hell. Getcha ! Lauren Wise

World-renowned DJ/producer Kaskade.
Timothy Norris
Kaskade
Saturday, August 19
Talking Stick Resort in Scottsdale
After Kaskade teamed up with Deadmau5 to release "I Remember," electronic music was never the same. The song became one of the hottest progressive-house/trance tracks of the last decade. With it, Kaskade – who’s known in his home state of Illinois as Ryan Raddon – anchored his name on the marquees of famous dance clubs around the world. Being twice voted the United States' best DJ and receiving five Grammy nominations has not distracted Kaskade from dropping hit after hit. His last album, Automatic, is approaching its two-year anniversary. Automatic was a more bass-influenced album, but features the airy female vocals that recall Kaskade's trance roots. And in mid-August, Kaskade’s travels will bring him to Scottsdale, where he’ll headline the Release pool party at Talking Stick Resort on August 19. Dylan White

A scene from the original Woodstock in 1969.
Mark Goff/via Wikimedia Commons
Woodstock Tribute Festival
Saturday, August 19
Cactus Jack's in Ahwatukee
The original Woodstock is widely considered to be one of the most legendary and influential concert festivals in the history of rock ‘n’ roll. And local musician Billy Dutton and the other organizers behind this weekend’s Woodstock Tribute Festival at Cactus Jack’s are hoping to channel the spirit of the 1969 event. “We're doing everything we can to recreate the atmosphere of Woodstock. That's the goal,” he says. As such, the indoor and outdoor festival will feature acts like (which pays homage to Santana) and The (who cover the songs of Pete Townsend and company). Dutton’s Band The Harvest will also play Dead tunes, Nina Curri will pay tribute to Joan Baez, Jennifer Hogenson will the songs of Janis Joplin, and a of musicians will recreate Ravi Shankar’s famed set from Woodstock. Someone will even pay homage to Jimi Hendrix's memorable version of "The Star-Spangled Banner."

Dutton says the event will be more than just musical . “It’s not just tribute bands,” he says. “We’re also going to have all these other aspects as well.” Like a 20-foot high mud outside of the venue, tie-dye everything, attendees in costume, and even someone jumping on the house mic to urge people not to take the brown acid. “100 percent that's going to happen,” Dutton says, laughing. “A number of things you would’ve heard at Woodstock, we're going to have someone doing that.” Benjamin Leatherman

Read on for even more great concerts and music events this weekend, including Pickwick, Shabazz Palaces, and Slayer.