Watching Trump's DACA Decision: It Felt Like an Episode of a Terrible Reality Show

Antonia Farzan
Dreamers line up for the news crews.
An unopened box of concha buns was lying on the table when I arrived at the United Food and Culinary Workers' conference room early on Tuesday morning. Most of the people who had shown up were journalists, and bound by ethics policies that prevented them from accepting free food. The handful of DACA recipients in the room were sticking to black coffee.

In a matter of minutes, Jeff Sessions was scheduled to go on TV and make an announcement about the future of DACA.

Over the Labor Day weekend, Politico had broken the news that Trump planned to end the program, but there were still questions about exactly what that would mean for the 28,000 Arizonans who rely on it for work permits, drivers' licenses, and in-state tuition — not to mention the ability to speak publicly about their legal status without the threat of being deported.

"My parents just bought a new house, so I spent the weekend helping them paint walls," Ezequiel Santos, a 25-year old DACA recipient who attends Mesa Community College, told me. "It helped to get my mind off this stuff." 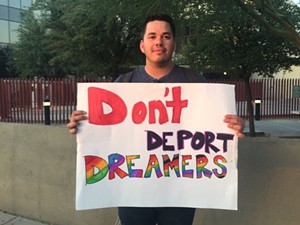 Ezequiel Santos on Friday afternoon, before the decision to phase out DACA was announced.
Antonia Farzan
On Friday afternoon, I'd met Santos outside the U.S. Immigration and Customs Enforcement headquarters in Phoenix, where he was holding a sign that said "Don't Deport Dreamers." All week long, activists had been camped out there in the triple-degree heat, waiting for an announcement. Finally, on Friday, they'd been told that one would be coming after the long weekend.

"It sucks, because everything's been a roller coaster emotionally," Santos told me. "Remove, postpone ... it's like being in a relationship when it's on-again, off-again, and I'm like, I don't even want to deal with this!"

But, he quickly added, "I'm here to stay. So I'm going to fight for my relationship with America."

Santos came to the United States when he was 2 and attended elementary school and middle school in Mesa, then moved to Queen Creek for high school. He became a Boy Scout, was voted "Best Smile" by his senior class, and went on to Mesa Community College, where he's currently studying digital communication while doing freelance work as a graphic designer.

Recently, he founded a group called Mesa Undocumented Students Thriving that provides support for undocumented and DACA students at MCC.

On Sunday night, he watched as the Politico article went viral on social media. But when Tuesday morning rolled around, he was still optimistic.

"All of us, at the back of our minds, we're hopeless romantics," he said. "We're all hoping it's going to work out in our favor. We're romantic about our relationship with this country. I have a very strong optimistic side — like it's always on max."

Nonetheless, he said, spending time with his family over the weekend had been bittersweet. His parents, in addition to buying a house, were also in the process of getting legal residency.

"They're able to move on in their lives, but to see their oldest son in this position, it must be tough for them," he explained. "They don't really talk much about it, but they've said that they're going to support me. I appreciate it, but I just feel like they shouldn't be doing that for me, at 25."

Just then, our conversation was interrupted: Santos was one of the DACA students who was going to be speaking to local and national media about his reaction to the White House's decision, and he was needed up at the front of the room.

DACA only came into being in the first place because Dreamers — undocumented immigrants brought to the U.S. as children — are incredibly effective at advocating for themselves. Tuesday morning's gathering was further proof of their media savvy: As soon as local immigrants-rights groups found out when the announcement would be happening, they invited reporters to watch it with them.

Standing in front of an oversized projector screen that was broadcasting the live feed from MSBNC, Korina Iribe of Undocumented Students For Education Equity at ASU explained that she and seven other DACA recipients — all experienced activists — would take turns sharing how they were feeling right before the announcement took place.

Afterwards, they'd be available individually to comment on the decision. Then, everyone would march to ICE, where a full-blown press conference would take place. Journalists outnumbered the DACA recipients in the room, but everyone would get their chance for a soundbite. As a result, local coverage of the event wouldn't focus on Sessions' anti-immigrant rhetoric — instead, it would highlight the stories of smart, ambitious Dreamers.

"To be honest, I am very anxious and nervous about what the announcement is going to be," Iribe said when everyone else had finished speaking, and her turn came. "But I am also ready because — "

Just then, MSNBC switched over to Sessions' speech. Everyone sat down in time to hear him pronounce the word "rescinded," each syllable clear and sharp despite his deep Southern drawl. There was a loud collective gasp, and then the room fell into silence.

Several of the Dreamers started to cry. The announcement might not have been much of a surprise, but that didn't make it any less painful. They'd given huge amounts of personal information to the government in good faith, and now it would likely be used to deport them. Two women sitting in the front row reached across the aisle and grabbed each other's hands. For a moment, they held tight to each other.

Then, a photographer in a grey fedora, press pass dangling, dived into to get a picture. One by one, the rest followed.

When Sessions finished talking, the lights snapped back on. All the journalists stood there for a second, awkwardly clutching recording gear and notebooks, as people wiped away tears. Ezequiel Santos hugged an elementary school classmate. "I'm so sorry," she whispered to him.

As soon as he pulled away, a TV reporter in a turquoise dress held out her microphone. "I know it's emotional right now — can you tell us what your response is?" she asked.

It all felt surreal, and more than a little dehumanizing. Santos' earlier analogy about dating was apt. Only, it was more like we were on some Bachelorette-style reality TV show, with people reacting live on camera after they were told that the U.S. government had chosen to end their relationship.

For the former reality TV show host in the White House, it was just the latest episode.