Phoenix New Times
Tampopo Ramen
Metro Phoenix is blessed with a world of ethnic eateries. We have the heavy hitters in spades: pizza and pasta to knock your socks off, sushi and ramen on a high level, and great new Korean barbecue joints opening on a near-monthly basis.

Lucky for us, Phoenix does the less-famous world cuisines just as well. Want to try stuffed Russian dumplings? How about Belizean coconut rice and fried plantains? The Valley has you covered. Here are ethnic eateries that cooked their ways to Best of Phoenix nods this year.

Zur Kate's offers a comprehensive menu of authentic German fare. Meals start out with a basket of rye bread, then it's time to pick an entrée. We're partial to the jager schnitzel, a piece of breaded pork loin topped with a brown mushroom gravy with onions and spices. Another good choice is the very tender and tangy sauerbraten, a beef roast marinated in vinegar. The Hausmacher bratwurst, Zur Kate's boldly flavored signature sausage, can be ordered on its own as a meal or added to your entrée for a small extra cost.

Vincent on Camelback has been around long enough to qualify as a local institution, but its light-handed fusion of French culinary tradition and Southwestern flavors often still feels revelatory. Plus, Vincent delivers all the virtues that you want from a classic French bistro: white tablecloth ambiance, attentive service, a bread basket filled with homemade mini croissants, and a winning wine list that goes on for days.

Unlike traditional Korean barbecue joints, Sizzle Korean BBQ has dedicated chefs to man the tableside grills. No matter who's cooking, though, the results are generally delightful. A big part of Sizzle's success rests on use of high-quality ingredients, which include prime beef and heritage pork, coupled with skillful execution. The results are beautifully seared cuts of rib eye, skirt steak, tongue, and brisket, tender and awash in flavor. 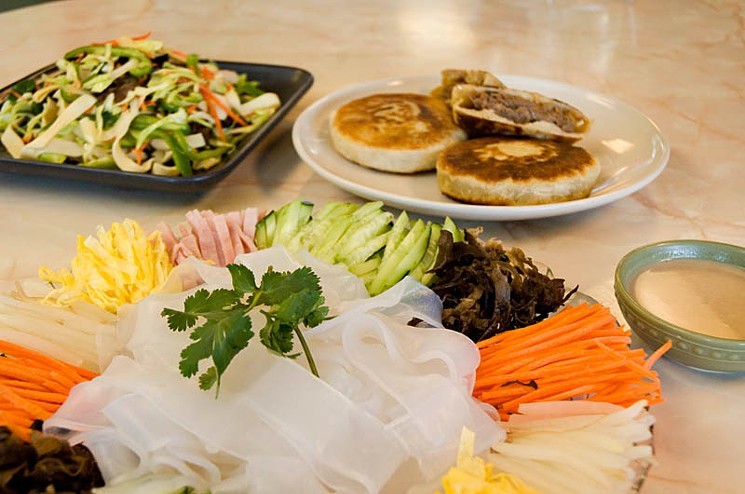 Chou's Kitchen's focus is on the cuisine of northeastern China, a regional variety that's still not as heartily celebrated as other provincial foodways. At Chou's Kitchen, though, the cold-weather cuisine of the Dongbei region is celebrated with a menu teeming with specialties like plump pork and chive dumplings; meat pies and homemade potstickers; cold noodle bowls that sing with notes of cilantro and chile paste; cumin-scented lamb; and the eternal comfort of a bowl of zhajiangmian, homemade wheat noodles topped with pork.

Chef Fukuda's tasting menu is always a treat; it has been known to include highlights like Miyazaki wagyu beef, exquisitely braised to reveal every layer of flavor. Another major highlight of dining at Nobuo is the chef's famous sashimi spoons, bite-sized servings of raw fish artfully arranged on white ceramic spoons, which often feature unconventional ingredients like nuts, olive oil, and even cheese.

Nandini is home to the same kind of Punjabi-inflected menu you'll find at most Indian restaurants around the Valley, where classics like tandoori chicken and chicken tikka are still the centerpiece of every menu. But at this Tempe outpost, the curries are thick and satisfying, the butter chicken melt-in-your-mouth, and the service friendly and fast. 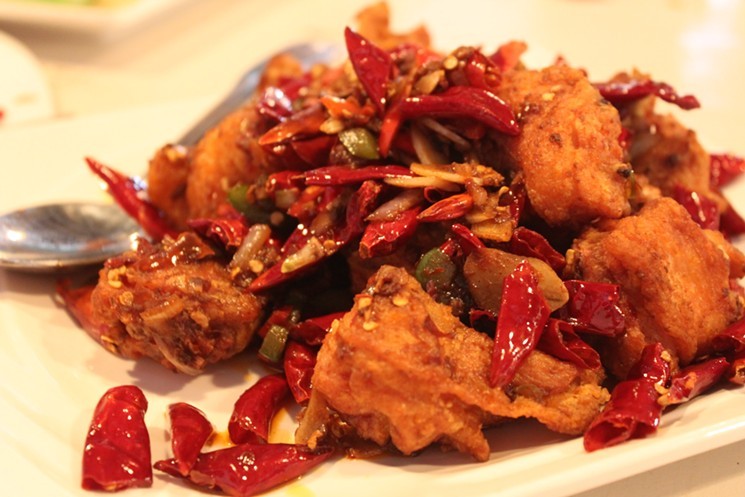 Growing up in Phoenix, our favorite chain Mexican restaurants always offered a hamburger on the kids' menu for unadventurous tykes. But we were shocked to see ham and cheese and bacon sandwiches on the menu of a sophisticated Chinese restaurant in Tempe. Turns out, that's part of what makes Asian Fusion Café so authentic.

For a true Arabian experience, unadorned and as you would find it in the Arabian Gulf, Mandi House delivers. The no-frills restaurant is lined with booths topped with napkin dispensers, and one wall is reserved for traditional seating on floor cushions. Your soda will come in a can, not a glass, and you will notice a few kernels of rice dotting the recently occupied tables. That's because the food here is all about the rice, ideally eaten by hand and crowned with a perfectly charred piece of fish, chicken, or meat.

AZ Kabob House is the most casual of the sit-down Persian restaurants in Phoenix, offering counter service in a bright, airy space in a strip mall. Their Persian specialties, like tender, ground beef kubideh kabobs served over saffron rice; homemade doogh, a salted mint and yogurt drink; and gormeh sabzi, a lamb and herb stew, are some of the best versions of these classic Persian dishes anywhere in town.

The small Central America country of Belize has a culinary canon that reflects the influence of ancient, rustic Mayan foods, modern Mexican street fare, and trade-town-style Caribbean dishes tinged with Spanish and African touches. The staple dish of Belize, a hearty plate of coconut rice and beans served with a tangy, black pepper-heavy potato salad, fried sweet plantains, and rich, stewed chicken, is a good representation of the country's food culture. In Chandler, you can get your first taste of the real deal at Elvira's, which opened this year.

When we want some of the best Italian food we've had this side of the pond, we make a visit to Marcellino Ristorante in Old Town Scottsdale. We can't get enough of the food, whether it's an appetizer like the grilled jumbo shrimp on a feta cheese croquette; entrees such as gnocchi in a creamy gorgonzola sauce, chicken breast layered with prosciutto and fontina; or classic Italian desserts like panna cotta and tiramisu.

We look for three things in an Italian deli: a good selection of groceries, friendly service, and of course, delicious prepared food. Niccoli's has all three in a small strip-mall storefront in uptown Phoenix. Our favorite menu item is the excellent Italian sub, a hearty sandwich that comes with Genoa salami, capicolla, mortadella, ham, provolone cheese, lettuce, tomato, onion, pepperoncini, and dressing on a fresh-baked roll.

The Rose & Crown has only been around for about 10 years, but it resides in what qualifies in these parts as a very old building: the Silva House, built in 1900 and now one of the historic homes turned businesses in downtown's Heritage Square. We enjoy the selection of more than 50 domestic and imported beers and a menu that includes standard American fare plus British classics like Scotch egg, fish and chips, and shepherd's pie.

If you're looking for leprechauns, you came to the wrong place: The Kettle Black is Irish without being in-your-face about it. After all, the most authentically Irish pub will always be the one with good music, good conversation, and a good pint (not necessarily in that order), not the one with the most shamrocks on the walls. And if you can add a good fish and chips or a bowl of steamed mussels to that list, well, more power to you.

A visit to Yasha From Russia is an immersive experience, beginning with the oversize Russian nesting dolls that adorn the exterior of the building. They have a selection of caviar (of course), but the real highlight of the market might be the frozen section. Coolers throughout the shop hold bins and bins of homemade pelmeni dumplings stuffed with everything from mashed potatoes and onions to ground pork to sweet cheese.

Asiana Market is in a class of its own. The sprawling grocery store is located in a Mesa strip mall, but once you pass through the doors, you will feel like you're in a supermarket in Seoul. From kalbi potato chips to fresh rice cakes for dubboki and specialty cuts of meat like cross-cut cow's foot, this market has every Korean staple imaginable.

Once inside Caspian Food Market on North Scottsdale Road, you'll find ramshackle shelves stuffed with Persian, Middle Eastern, and Indian ingredients, canned goods, dried beans, and sweets, in no discernable order. But the real reason to visit this shop is the stone-oven bakery tucked in the back, just behind the register. There, a team of bakers make thin, chewy, sesame-encrusted sangak bread; delicate rounds of lavash; and thick, pillowy ovals of barberi bread.

Chula Seafood is an all-in-one source for high-quality and sustainably caught seafood in the desert. The family-owned and -operated shop specializes in fresh seafood caught off the Pacific Coast, which is delivered straight to this small, friendly fish market and restaurant in Scottsdale. The selection varies, but you can usually count on restaurant-grade yellowfin tuna and swordfish, along with a revolving menu of other freshly caught seafood.

A sushi restaurant isn't where we were expecting to find a Parmesan cream scallop so good it elicits moans of pleasure, but hey, love works in mysterious ways. Yasu isn't one of the better-known sushi joints in town, but it should be. From the freshness of the ingredients to the dimly lit, intimate setting and the welcoming service, Yasu provides a consistently satisfying dining experience.

Founded by ASU grads, Pokitrition offers the tradition poke options of rice or salad with seafood options like raw tuna, raw salmon, or cooked shrimp, dressed in a savory sauce and topped with items like cucumber, edamame, red cabbage, cilantro, masago, seaweed salad, crab salad and more. But Pokitrition really stands out for its Poke Wrap, also known as the Sushi Burrito. It's basically your standard poke rice bowl rolled up in wrap form, and it is the stuff that Instagram posts are made of.

Before sushi became something that you could pick up at your local Walmart, it was more often than not the special province of restaurants like Hiro Sushi in Scottsdale. This perennially popular mom-and-pop restaurant is lively and friendly, offering a first-rate sushi and sake bar with an expansive selection of fish and rolls. The sashimi dinner, featuring an array of sliced tuna and salmon, is a wonderful introduction to the pleasures of Hiro Sushi.

Whether you're a longtime ramen connoisseur or you were weaned on the cheap Styrofoam cup stuff, odds are good that you will find something to love about Tampopo Ramen. The strip mall restaurant in Tempe specializes in hakata-style ramen and tonkotsu — thin, straight noodles paired with an intensely flavored pork broth. The restaurant also serves a great assortment of Japanese bar snacks.

Great Wall Cuisine is located in an older, west-side strip mall, but don't let that keep you from stopping in for a pot of tea and dim sum. Inside the cavernous dining room, this classic restaurant welcomes large parties with tables equipped with lazy Susans, while scruffy booths accommodate smaller parties. Highlights include classics like siu mai, steamed pork and shrimp dumplings; braised chicken feet; and hard-to-find specialties like duck tongue, a texture-rich treat that is slightly chewy and fatty.