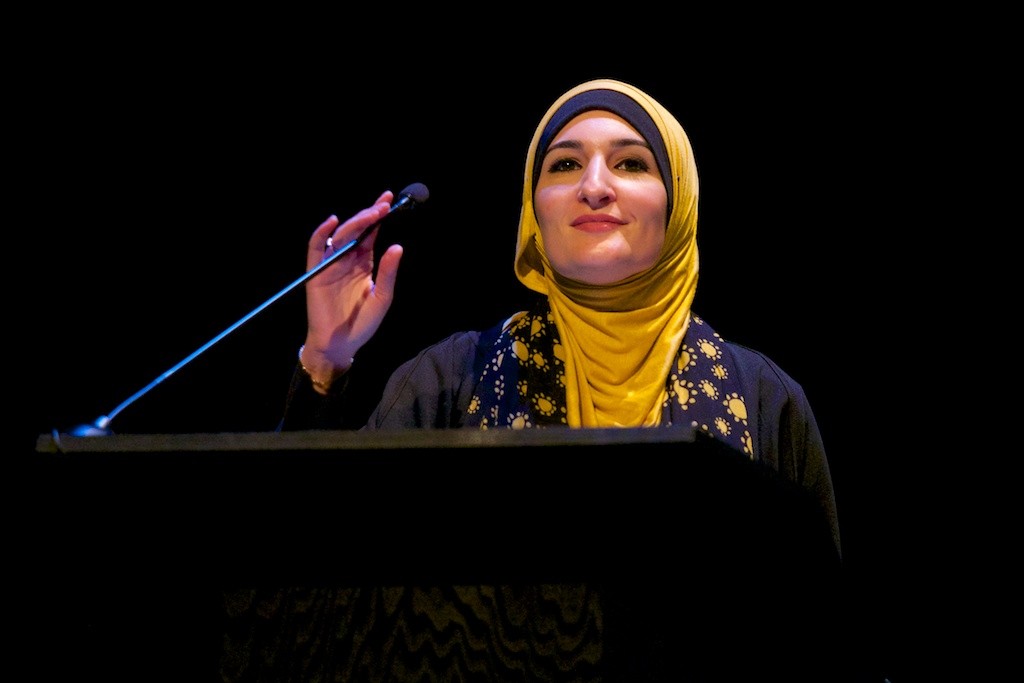 Flickr/Festival of Faiths
Linda Sarsour
Over the past year, Palestinian-American activist Linda Sarsour's profile has skyrocketed.

After she co-chaired the Women's March in January, she was named one of Time's 100 Most Influential People, profiled in Vogue, and discussed as a potential candidate for national office. She's arguably the most prominent American Muslim woman in public life.

So it's kind of a big deal that the Council for American-Islamic Relations' Arizona chapter was able to get Sarsour as the keynote speaker for their annual banquet, which is taking place on November 4.

Unsurprisingly, the anti-Muslim crowd is outraged.

CAIR-Arizona's executive director, Imraan Siddiqi, said that the group's Facebook posts have been flooded with hateful comments that he spends hours deleting. And Understanding the Threat — a group that was recently hired to train Arizona law enforcement officers — has been asking people to boycott Sheraton hotels because they're hosting the banquet.

"People are saying she's a sharia law advocate and wants to kill the gays," Siddiqi said. "There's been a witch hunt from the far right after the Women's March — you've seen a very concerted effort to take what she's said out of context and misrepresent her statements."

Some of the comments that he's deleted are just stupid and offensive (for instance, a photoshopped pig wearing a hijab.) Others cross the line into sounding more like a direct threat — such as the commenter who wrote, "I wish her a slow painful death."

Screenshot/Facebook
That one got reported to the Mesa Police Department.

"It's a very blurry line between what's a threat of violence," Siddiqi explained. "Anti-Muslim hate crimes are up, and you don't know when someone's going to act out. You have to be very cautious."

The majority of commenters who are spewing hateful garbage — maybe 90 percent, he estimates — indicate in their profiles that they're from Arizona, so they're not some distant threat.

"Their accounts show up as people who live in Phoenix, so that's a little bit troubling," Siddiqi said. "You don’t know what these people are capable of."

Anti-Muslim demonstrators showed up at last year's annual banquet at the Phoenix Airport Marriott and tried to crash the event. They were stopped by hotel security and local police, Siddiqi said.

Screenshot/Facebook
He believes they were affiliated with a site called BombIslam.com, which posts videos of people disrupting events hosted by local Muslim organizations — usually while tearing up a Koran and yelling deranged comments about "devil-worshippers."

The group previously showed up at a lecture about Islamophobia at ASU, telling attendees, "Muhammad was a pedophile" before being escorted out by security.

"It makes our community nervous, honestly," Siddiqi said. "Some people, they feel a sense of empowerment to stand up against the hate — but you don’t know what type of chilling effect it has on others."

Not that any of this is new. For each of the six years that Siddiqi has helped to plan CAIR-Arizona's annual banquet, there's been a torrent of hate.

"It's the cost of doing business," he said. "Any time a Muslim group has an event, it becomes a target."

This year, though, it's worse than ever.

"The fact that [Sarsour] is a high-profile person probably has a lot to do with it," he said. "She’s become the most visible American Muslim woman, so a lot of this hatred can be ascribed to that."

Anyway, if you'd like to hear Sarsour's talk and support CAIR-Arizona's civil-rights work while you're at it, it's not too late to buy tickets.