Why Amy Gentry Is Writing the Book on Boys for Pele 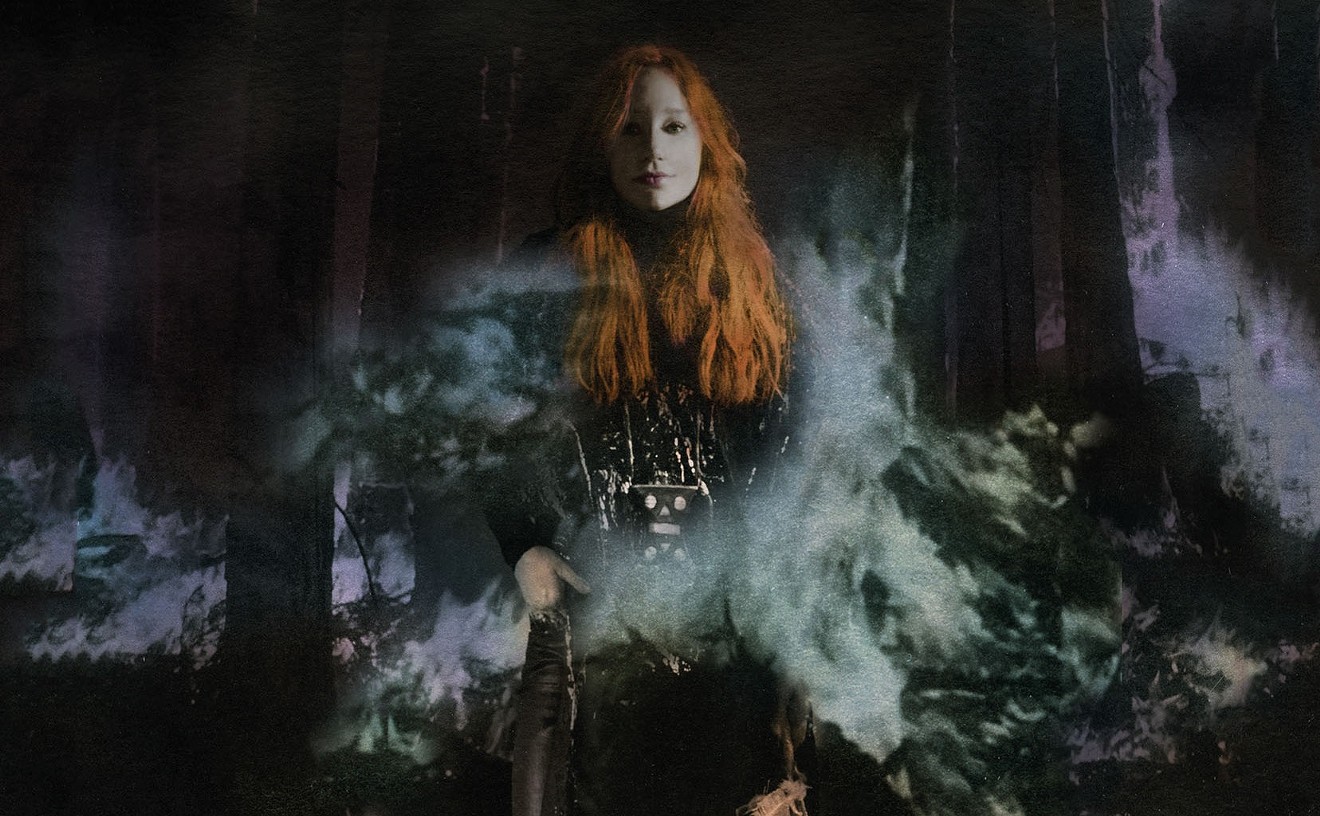 Paulina Otylie Surys
The esteemed and uncompromising Tori Amos.
There’s no act of music fandom more elaborate and authoritative than writing a 33 1/3 book. Founded in 2003, the series of pocket-size books from Bloomsbury Publishing takes in-depth looks at classic records. Each installment focuses on a new album and is written by a different author, typically a dedicated fan of the particular work.

One of the forthcoming books is on Tori Amos’ Boys for Pele, the musician’s contentious third album, released in 1996. Written by Amy Gentry, the book is set for release in fall 2018. In advance of Amos’ November 29 concert at Mesa Arts Center, we talked with Gentry about the record, her writing process, and how Amos has maintained a devoted fanbase.

Phoenix New Times: The most immediate question that comes to mind is why Boys for Pele? Out of all the albums you could devote an entire book to, what drew you to write about this particular Tori Amos album?
Amy Gentry: A couple of years ago my husband had passed to me Carl Wilson's book on Celine Dion's Let's Talk About Love, which is one of the more infamous 33 1/3s.

That book is fantastic.
I loved it, but I was also kind of incensed by it. It made me think that I really wanted to write something about the issues it raised for me. I had studied aesthetic theory in grad school, and it was very telling to me that you're taking this thing that you're disgusted by and writing a whole book about it. Shortly after reading that I saw that 33 1/3 put this call for submissions. Along with the call was a list of books that had people signed up to do for, but for one reason or another that project hadn't work out, and Boys for Pele was on there.

The reason I thought Boys for Pele would make a great vehicle for that kind of thing is – the first time I heard Tori on the radio, back in junior high, I was fascinated and repelled at the same time. I didn't immediately get it – I kind of hated it. But then I couldn't let it go, and I became infatuated with it. I got really into Little Earthquakes and Under the Pink. And when Boys for Pele came out, it was so different from those two.

Tori's always been horribly ambitious from the start of her career, but Boys for Pele, for me, is where that ambition becomes ... some people at the time thought it was too much. It was so over the top and baroque and all over the place. And it had the bull and the piano on fire. It's not something that the people who had been enjoying her first few albums were ready for.

Critics gave her a really hard time about Boys for Pele. A lot of critics had been with her early on. They were impressed by her debut, they liked the second album, but suddenly hopped off-board for Boys for Pele. Places like Rolling Stone panned it. I also panned it as a 17-year old critic for my high school newspaper. I was so mad – I called her over-indulgent. A couple of months later, it was like my favorite album. It helped me through a breakup and I became obsessed with it.

So when I was thinking of doing a 33 1/3 book, part of the context for it was that Carl Wilson book. That feeling of disgust or horror ... around these objects that have to do with women and women's bodies. I started trying to square all that with my own feelings about the wider critical response to her, which has been incredibly polarized. And I think you can trace a lot of that polarization back to Boys for Pele.

One of the things that draws me to the 33 1/3 series is seeing all the different strategies and tactics writers use to talk about their subjects. Some 33 1/3 writers use oral histories, or do these journalistic exposés, or resort to some pretty in-depth lyrical analysis. I was wondering what your approach was to writing about Boys for Pele? Did you talk to Tori or anyone else who worked on the record?
I avoided direct contact with Tori herself and her people. There's a couple of reasons for that. For one, I'm not good at interviewing my heroes. I was intimidated by it; I write about books, and no authors for books are that famous. But it's also because Tori has always been so forthcoming in her interviews. She's produced tons and tons of interview materials. She has this whole book with Ann Powers where she collaborated with Ann on writing her own poetic autobiography. It's just hard to imagine getting anything new in that area. The best case scenario is that I'd end up hitting it off with her, and then I'd be unable to write about her with any objectivity at all.

My approach was more to look at the album as an object of study. I read a book on her whole career and I read a lot of the critical reception around her work.

I dug into all that because I wanted to see where the tide turned. Reading all these old reviews from the '90s – you could just see all this misogyny oozing out of them. So I ended up hooking this whole thing around an aesthetics of disgust, ambivalence, and abjection. Around how women's taste is itself problematic because taste is something that is – the modern theory of taste came out of Western European men, and it came from a time when women didn't make art.

They weren't expected to be critical themselves; they were expected to be objects of criticism, bodies that were meant to be appreciated as aesthetic objects. That's kind of where I got excited about the Carl Wilson book. Because of course, if you're trying to discover what taste is, you start with Hume and you go to Kant. You're getting a picture of something that does not have a room. Trying to put Celine Dion into that – it's like trying to put a square peg into a round hole.

And it's not just, “Oh, straight men don't get Tori.” Sometimes it can be that – any artist with a fanbase that's primarily women and gay men is going to be devalued in our culture. It's more than that, though: There's this internalized disgust as well, because I had felt that at one point.

If you look at people who disliked her back in the '90s, the terms they'd use to describe her are so overheated. It's like they're fascinated by her and just can't stop picking at it. Much in the same way that Carl Wilson can't help pick away at his disgust for Celine Dion.

And in terms of my methodology, I did also do some lyrical and musical analysis – as much musical analysis as someone who's only taken a few piano lessons can do. There's also a bit of autobiography in there.

Because of how you felt about her when you were 17? So the book is in some ways also about your relationship to Tori's music and how it's changed over time?
Absolutely. The changing relationship to her music – it was there from the beginning. The very first time I heard her, it was “Silent All These Years” on the radio, and it just got to me. I remember telling somebody about it later that day – I was in the eight grade at the time.

I was trying to describe it: “I don't know, it was stupid, it had a bunch of piano, it was so dumb.” Within months of saying that I not only owned the album but was playing it obsessively on repeat. I was even learning how to play it on piano. I became one of those girls who was always hunched over a Tori piano book.

That initial reaction is partly how women's tastes are wired – we're taught to distrust anything to do with women and our bodies in art.

Something I've always wondered about Tori Amos is how she's been able to maintain such a devoted following over the years. It's like you pointed out: she's someone that critics have either dismissed or taken for granted over the years. And on a commercial level, she hasn't had a hit song in ages. But yet she continues to pack houses when she tours. What is it about her that commands that devotion?
First and foremost, she's a brilliant musician. Her songwriting, the complexity of it. She's spent her whole career doing exactly what she wants to do. Letting her mind and talent go completely where she wants them to go. She's never had a fallow period. I can't really speak to her more recent work as much, because I focused so hard on Boys for Pele and the albums leading up to it.

I think there's a lot of identification with her music. Part of the reason she gets so dismissed is because the emotional and embodied attachment fans have to her work, which is often the way women and gay men inhabit works they love. It's outside the critical pale. That's a function of the aesthetic history that I got so interested in – it's really a historical phenomenon about how we think about taste, in that we exclude these kind of emotional and identification responses.