Stephen Perkins on How Jane's Addiction Stays in the Moment

In fact, the band that fused rock, punk, glam, and metal to help shape the ’90s alt-rock scene have been operating intermittently since their initial split back in 1991. No one in the band has a problem with that. To them, it’s a matter of keeping it real.

The band was formed by singer Perry Farrell and then-bassist Eric Avery in 1985, after the two were done with their first project, Psi Com. The two went through some other members before things stuck with Dave Navarro on guitar and Stephen Perkins on drums. All but Avery are in the current lineup. Chris Chaney plays bass, and things seem to be quite harmonious.

Perkins says the off-and-on schedule helps the band stay in the moment.
“The benefit of coming and going, and the peaks and valleys of our work ethic, so to speak, is great for the actual show. We’re not doing ‘Mountain Song’ 50 times a year; we’re doing it five times.”

He’d happily play it as much as needed, and he’d have the same excited energy, but digs what he calls “the funnel effect” that these sporadic performances allow. “After waiting weeks and months, when you finally get to play the songs, there’s such an emotional connection that you get,” he says. 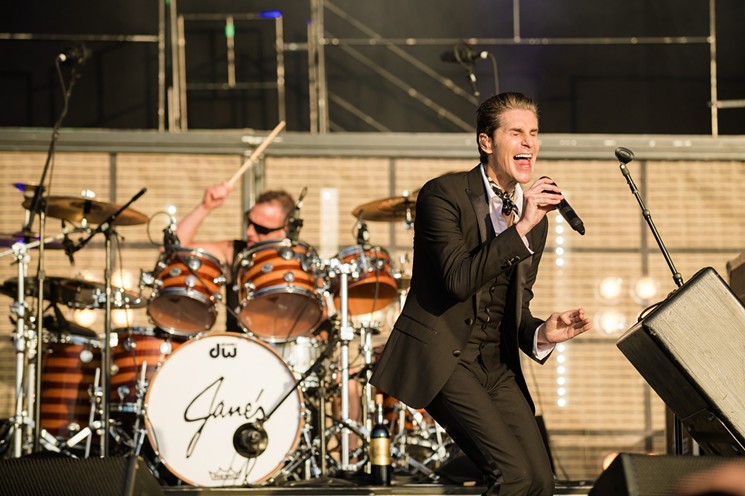 “We just have to wait for the right time for everyone,” Perkins says. “That makes it honest.”
Skyler Greene: @alivecoverage
“When Perry writes a poem, and we write our parts, there’s something magical that happens. When I get to the stage, it’s a great celebration, so I could easily do it 150 times a year, but sometimes absence does make the heart grow fonder, and then I hit the stage and it’s like, ‘There’s Perry, and Dave, and Chris, and I miss you guys, let’s do this!’”

Jane’s Addiction hasn’t released anything new since The Great Escape Artist in 2011, and the band’s best known releases are 1988’s Nothing’s Shocking and 1990’s Ritual de lo Habitual. There aren’t any set plans to put down new songs, but Perkins says he would love it.

“If I managed this band, I’d book a garage setting for five months, have everyone put aside all their other projects, and work on new Jane’s music.”

There’s nothing in particular stopping that from happening.

“We just have to wait for the right time for everyone,” Perkins says. “That makes it honest.”

He says he’d like to see the band hole up in a gritty practice space for a while and let the songs roll out without the contained environment of the studio — instead of diving right into the studio.

“There’s a vibe that exists in the jam room that is unlike the recording studio,” he says. “It allows more for the ebb and flow. You can hear the personalities, and that’s what makes a great rock outfit.”

For him, that chaos embodies the band’s nature. “Me, Navarro, and Perry are true punks, in the sense that we’re not trained musicians. Chris is, but he’s got punk rock all through him and can explain music theory as much as he can understand where the rest of us are coming from when we’re playing.”

He says that part of what keeps the fiery energy and nuances in their sound is that they’ve all always traveled in some different circles and have different, diverse record collections. “It makes for an eclectic sound.”

The live show builds on the band’s inherent and poetic chaos, with changing set lists nightly and a flow that allows for organic moments to happen — like an extended guitar solo or Farrell interacting with the audience.

“Jane’s can be bent in all directions, and we can start with any song and it doesn’t really matter. As long as we’re in the moment and playing our songs with heart, anything can happen.”