10 Iconic Arizona Restaurants Worth Traveling For 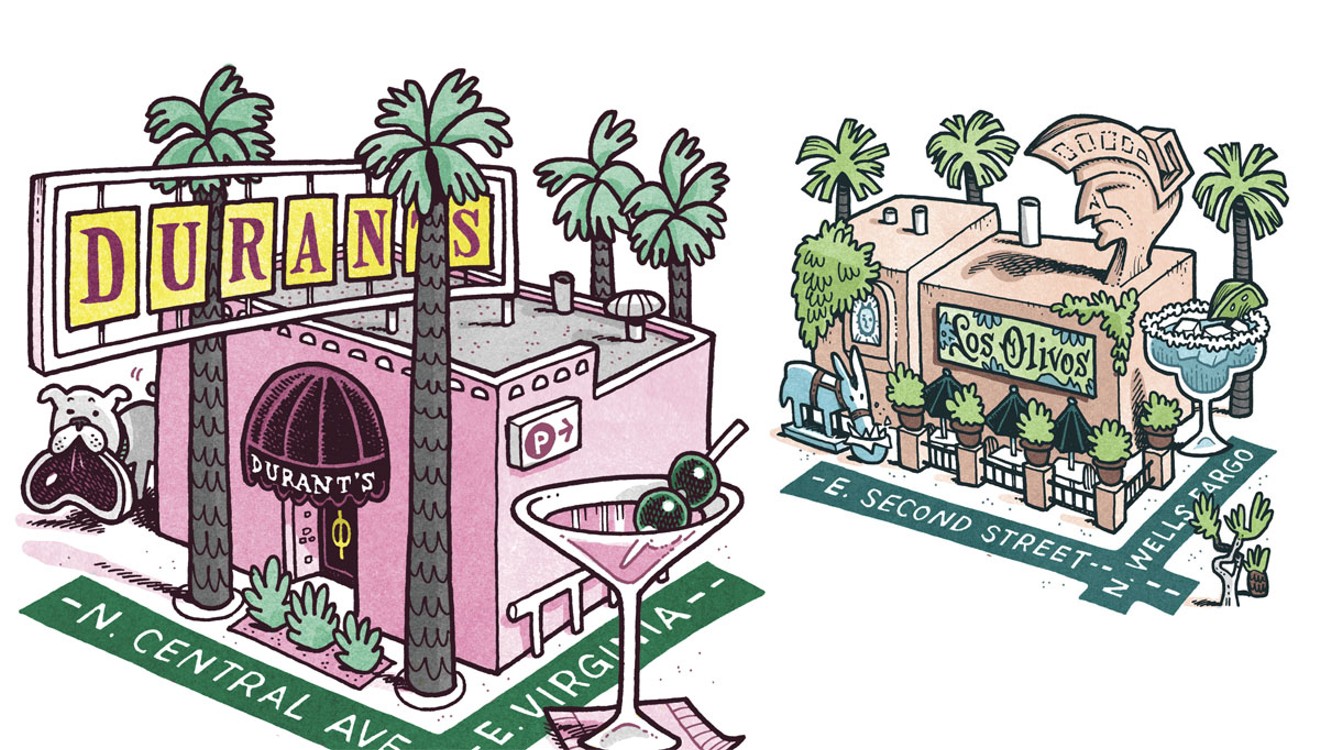 Yuma sits in an actual desert, as well as a food desert. Its most visible strip of commerce along the Interstate 8 corridor is a chow dystopia of corporate-chain hell. The innards aren’t much better; the historic downtown — mostly wiped clean of the interesting architecture it once held — is anchored by two or three blah, locally owned eateries. This newspaper has been tough on Yuma in the past, referring to it as “an armpit” with a dead Main Street, but we will make partial amends here by drawing attention to Brownie’s on Fourth Avenue, a place where Yuma’s few tourists rarely venture but where the locals know to go for damn good diner food as well as an ear into local agrarian politics.

Owner Bobby Brooks used to be on the City Council and he’s friends with Sen. John McCain, so the plantocracy of Yuma knows how to find each other over coffee and big plates of locally made Kammann’s sausage. The Wrangler’s breakfast with three eggs and your choice of pressed meat is also a popular choice, as is the fish fry on Friday nights.

“It’s an old-fashioned, hometown, home-cooking restaurant,” says Linda Brooks, Bobby’s daughter. “Everything is made from scratch.” Brownie’s has been a presence in this town since 1946, when the owner — a dairy farmer named Mr. Brown — built an ice cream stand here and named it for his son, who was killed in World War II. Brooks took it over in 1977 and turned it into Yuma’s indispensible breakfast joint. We would be remiss not to note that Mexican food is conspicuously absent from the menu, just as Mexicans themselves are poorly represented in the local power structure — and the clientele at Brownie’s has a decidedly Anglo dominance, right down to the desert rats who look like they’ve just gotten off the nearby Camino del Diablo after a 40-day spell. But for a look and a taste of midcentury Arizona, as well as priceless overheard conversation at the ’50s-style counter, this is as good as it gets.

Tucked into its slopes and its gulches, the played-out copper village of Bisbee houses more interesting human beings than any other 2 square miles of Arizona, and possibly as many as the entire state put together. The Phelps Dodge mine went bust in 1973, leaving an astonishingly large pit in its center and a diorama of emptied cottages and charming Victorian homes that were gradually reoccupied by graying hippies, stand-up comedians, gays, lesbians, political activists, retired ornithologists, paroled former drug-dealers, reclusive millionaires, fashion models, turquoise bandits, and dozens of assorted polymaths who fit no recognizable category and wanted to live off the grid.

In 1993, two employees of Phoenix’s now-vanished Registry Resort — Rod Kass and Sally Holcomb — were looking for a place to open their own restaurant, and they picked a storefront in Tombstone Canyon that housed the Tavern Bar, a downmarket shot-and-beer establishment that nevertheless bore a mezzanine level and pressed-tin ceilings: relics of Bisbee’s elegant history as Southern Arizona’s richest town. Café Roka is open Wednesday through Sunday and only for dinner, but the whole gustatory experience earns it a spot on the list of icons, despite its young age. The fresh local ingredients; the vegetables grown on a farm in nearby Patagonia; the mandatory soup, salad, and lemon sorbet that come with every entree; the mixture of elegance and blue-jean informality; the ghosts of the past that seem to be hanging around the room; and the incomparable characters of the ongoing human comedy of Bisbee who gather at the wraparound bar to give each other a hard time make this a restaurant that stands as a delicious microcosm of its surroundings. 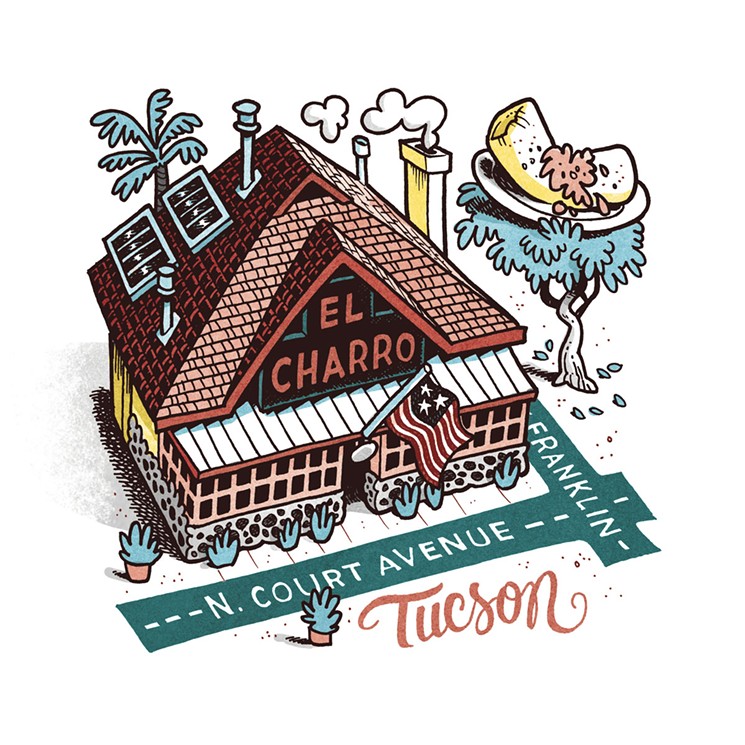 The irony: America’s oldest operating family Mexican restaurant was founded not by a Mexican national but by the daughter of French immigrants. Monica Flin, whose father Jules was a stonemason who helped to build the nearby St. Augustine Cathedral, learned Spanish, married a Mexican man, and moved away, but returned to Tucson in 1922 after a divorce to open a restaurant that relied on a bit of leveraged creativity to help it squeak by. During lean times, she would sometimes take an order, run over to a grocery to get ingredients on credit, rush back and cook the meal, then quietly pay off the grocer with the customer’s money.

El Charro — named for a particular type of spangled horseman — also claims to be the birthplace of the chimichanga, that deep-fried burrito whose origins remain disputed. Monica’s relatives always claimed that it got its name from a Spanish corruption of the word “thingamajig,” which came out of Monica’s mouth after she dropped a tortilla full of beef into hot oil, and then started to say a Spanish verb beginning with “ch-” that implies fornication (yes, that one). Other signature dishes include the caldo de queso and the carne seca — spiced beef dried in a special cage on the roof. The restaurant now has two other locations in Tucson, and will soon open a prized spot in concourse B of the airport. But the flagship in the El Presidio neighborhood on Court Street — the old Flin home with its wide porch — is the place to come for the ambiance, for it feels like eating in an old friend’s living room. The neighborhood outside also happens to be the most European-feeling in the state — perfect for a post-repast stroll.

For most of the 20th century, Route 66 was more than a paved connection to Los Angeles for the rest of the country. It was also a river of money for those who had the gumption and the startup money to open an eatery to lure the drivers off the Mother Road for a little while.

Juan Delgadillo was among the most imaginative of the Route 66 hucksters, and he built his drive-in from lumber salvaged from the nearby Santa Fe railroad yard — a fitting symbol, for the highway and all its colorful roadside barnacles were the replacements for the train route that connected northern Arizona’s linear vine of jerkwater towns. Delgadillo lavished his considerable sense of humor on the premises — a neon sign proclaimed “sorry, we’re open,” the menu featured “cheeseburger with cheese,” and a 1936 Chevy parked in the lot sported a Christmas tree sprouting from the back, while a phone booth outside housed a toilet. Delgadillo messed with his customers in other ways, by squirting “mustard” at them, which was actually yellow string from a bottle, or by first serving an absurdly miniature portion of an order. The comedy went on all day long, and although the puns and insults were too much for some grumps, families tended to remember the place and make repeat visits on their cross-country trips.

Seligman almost died after Interstate 40 routed cars from its downtown in 1978, but the Snow Cap — now patronized by foreign tourists as much as locals — preserves a specific time and culture of Arizona eating: the majestic era of the roadside ice cream cone and grilled delectables wrapped in white paper. 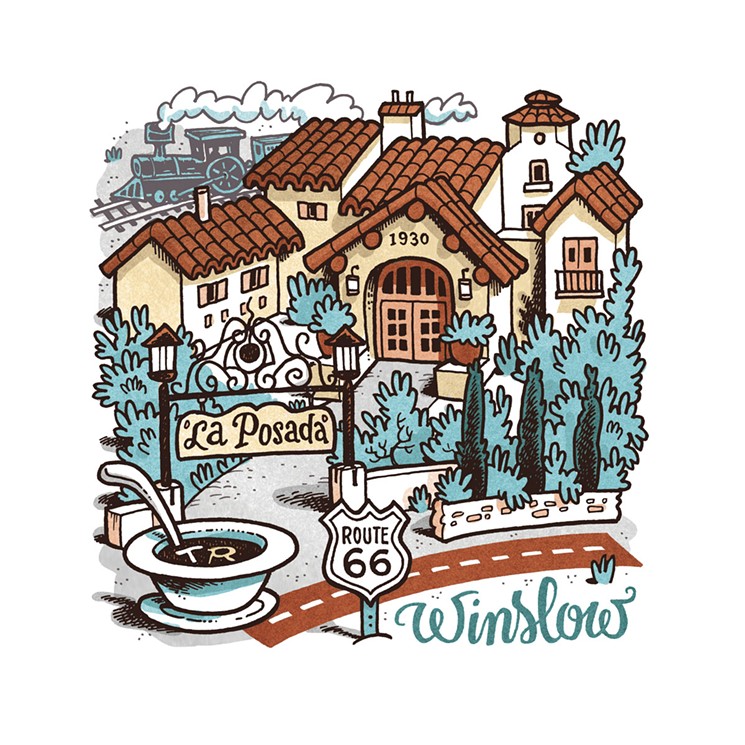 One of Arizona’s most sybaritic restaurants has its origin in an era of awful food: the time when Western train passengers were given flyspecked slop and told to like it. The Englishman Fred Harvey changed all that: He persuaded the Santa Fe Railroad to let him operate a chain of eateries along the tracks that treated customers like royalty, with haute cuisine to back it up: filet mignon, oysters, exceptional wine and gourmet coffee.

La Posada — “the resting place” — in Winslow was the last of the superlative Harvey Houses, designed by prolific Southwestern architect Mary Colter and built in 1930, and it survived only 27 years before the gradual decline of the passenger train forced it to close. The restoration artist Allen Affeldt saved it from oblivion 20 years ago and reopened the Turquoise Room restaurant, which routinely wins accolades from the international foodie press, and an attached hotel that retains Colter’s quirky touches like stained-glass windows, arched entryways, wrought-iron bars, and ashtrays shaped like jackrabbits. Insider tip: Make reservations for 7:30 p.m. because the westbound Southwest Chief passes by 20 minutes later, announcing itself with the rumble of a forgotten monarch and reminding the entire room full of diners the raison d’etre for the churro lamb and seared elk medallions on their plates. 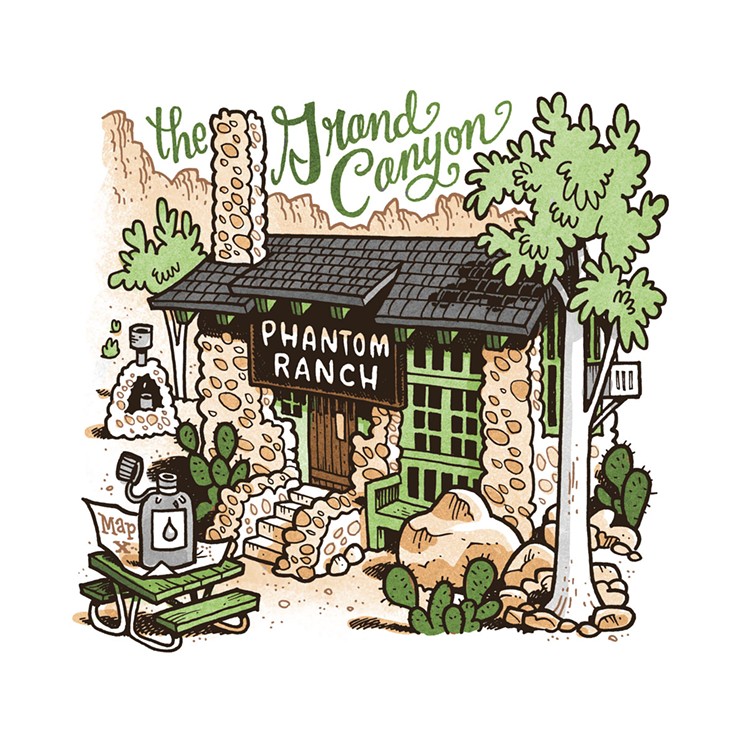 A word of caution: Parking is a bit of a hassle at this establishment. The nearest lot is 7.5 miles away. You’ll have a walk descending through tens of millions of years of geological strata down to the bed of the Colorado River at the bottom of the Grand Canyon where Mary Colter — eight years before she got to work on La Posada — had designed a series of cabins and bunkhouses near the river’s junction with Bright Angel Creek. Flagstaff author Scott Thybony worked there in 1972 and goes back frequently to dine on food that’s been hauled in by mule train.

“The meals haven’t changed much,” he recalls. “Standard ranch fare.  Last week, we had a hearty stew, with the emphasis on hearty, salad, and chocolate cake. No frills, and that works out fine since most people have left their frills behind by the time they get to Phantom. An industrial-strength air conditioner, which must have been salvaged from a meat locker, keeps the dining hall cool.” He adds, “One change since I worked there — the dining hall goes through as many set changes as a theater production.  It begins the day as a coffee house, then transforms into a lunch room, a beer hall in the afternoon, then a dinning room before reverting back to a beer hall.  They do their part to help people comply with the park service advice to drink plenty of fluids.  Meals are family-style served on long tables.  Good food, hard-working staff, set in the most spectacular surroundings anywhere.”

Careful about overeating if you have no room or campsite reservation, for it’s a long slog back to the car — at least six hours, even for those in top condition. But you can brag about having dined at Arizona’s most remote restaurant, and one of its icons.

previous
KEEP PHOENIX NEW TIMES FREE... Since we started Phoenix New Times, it has been defined as the free, independent voice of Phoenix, and we'd like to keep it that way. With local media under siege, it's more important than ever for us to rally support behind funding our local journalism. You can help by participating in our "I Support" program, allowing us to keep offering readers access to our incisive coverage of local news, food and culture with no paywalls.
Make a one-time donation today for as little as $1.
Tom Zoellner
Contact: Tom Zoellner