Sean Traynor setting a pineapple to an Agua Caliente at Cotton & Copper. Chris Malloy
Cocktail culture in Phoenix gets better with just about every new opening. To say juices are freshly squeezed now – and to make other similar boasts about syrups, bitters, and aquafaba – is now no longer impressive. It has become the new norm. The bar, ahem, has been raised. Cocktails in Phoenix continue to get better all the time, as these four new cocktail-focused establishments prove.

Sean Traynor measures juice.
Chris Malloy
Cotton & Copper
1006 East Warner Road, #113, Tempe
The focal point of new restaurant Cotton & Copper is a looming bar back of wood, bottles, and mirrors. “Public house,” owner Sean Traynor explains. “That was the whole idea behind the place, a modern take on what I thought a public house could be. And then just really drive the narrative of, it’s craft cocktails supported by an amazing food program, and not the other way around.” Traynor’s drink menu pays homage to Arizona and his mentors. He shoots for cocktails that are fresh and well-balanced – not too fancy, but often using items like Zucca and blueberry jam. A cocktail that tunnels you into Traynor’s mind, and to Cotton & Copper’s heart, is the Agua Caliente. He crafts the drink from chile-infused mezcal, lime juice, ginger, and pineapple. 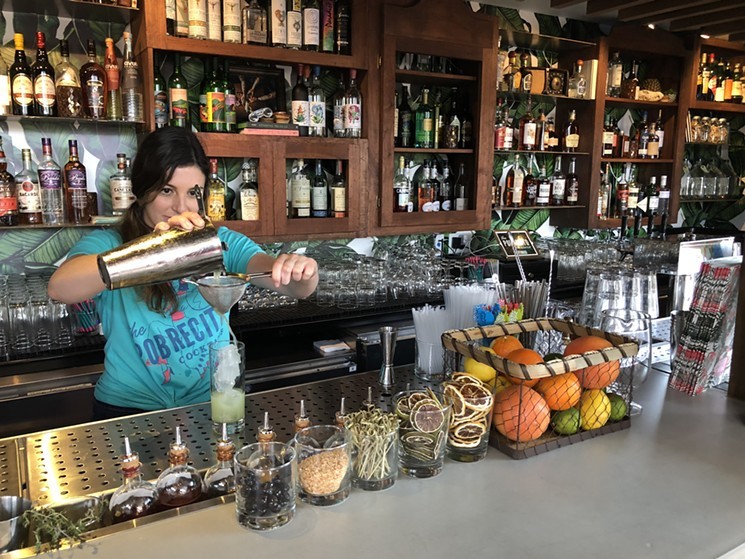 Kacie Asher, Jason's sister, eyes up a drink at Pobrecito.
Chris Malloy
Pobrecito
901 North First Street
The newest cocktail bar from Barter & Shake, founded by Jason Asher and Rich Furnari, is now open in The Churchill. Pobrecito has a Latin vibe: Cuban music, frozen drinks, a focus on spirits made from agave and sugarcane. There's room for some 500 people in the shared courtyard of the lofty central Phoenix project; in order to best serve the thirsty masses, Asher and his team have taken some new angles. One: frozen-drink machines. They mix a pair of drinks, including a pina colada made from pineapple juice, coconut milk, cream of coconut, and a 4-year-old Puerto Rican rum. Another way Asher streamlines things is by keeping cocktails on tap. There are, of course, more conventionally made cocktails, like The Prado – a drink that begins as Fernet Branca infused with strawberries for 36 hours. This enigmatic blend is united with overproof white Jamaican rum, mezcal, strawberry liqueur, lime, and bitters.

The B’s Please is served with a sprig of fennel and a dehydrated slice of grapefruit.
Allison Trebacz
The Larry
515 East Grant Street, #100
Phoenix's warehouse district has a new restaurant that serves the three most important meals of the day: breakfast, lunch, and happy hour. During Happy Hour, select craft cocktails (along with wine and beer) will be just $5, which should fit the budgets of bootstrapped entrepreneurs and other downtown folks. And we’re not talking basic simple syrup margaritas. The Larry is serving craft cocktails like the Hemingway-ish – a blend of aged rum, absinthe, and house-made grapefruit soda – or the B’s Please, which combines fennel-pollen-infused gin, golden beets, grapefruit, lemon, and honey. Bartenders here are infusing, dehydrating, and making sodas for cocktail purposes. The Larry has a list of seven or eight specialty cocktails to choose from, and eight beers on tap. Larry’s Happy Hour could be the best thing to happen to the warehouse district in quite some time.
KEEP PHOENIX NEW TIMES FREE... Since we started Phoenix New Times, it has been defined as the free, independent voice of Phoenix, and we'd like to keep it that way. With local media under siege, it's more important than ever for us to rally support behind funding our local journalism. You can help by participating in our "I Support" program, allowing us to keep offering readers access to our incisive coverage of local news, food and culture with no paywalls.
Make a one-time donation today for as little as $1.
Elizabeth Maria Naranjo
Contact: Elizabeth Maria Naranjo