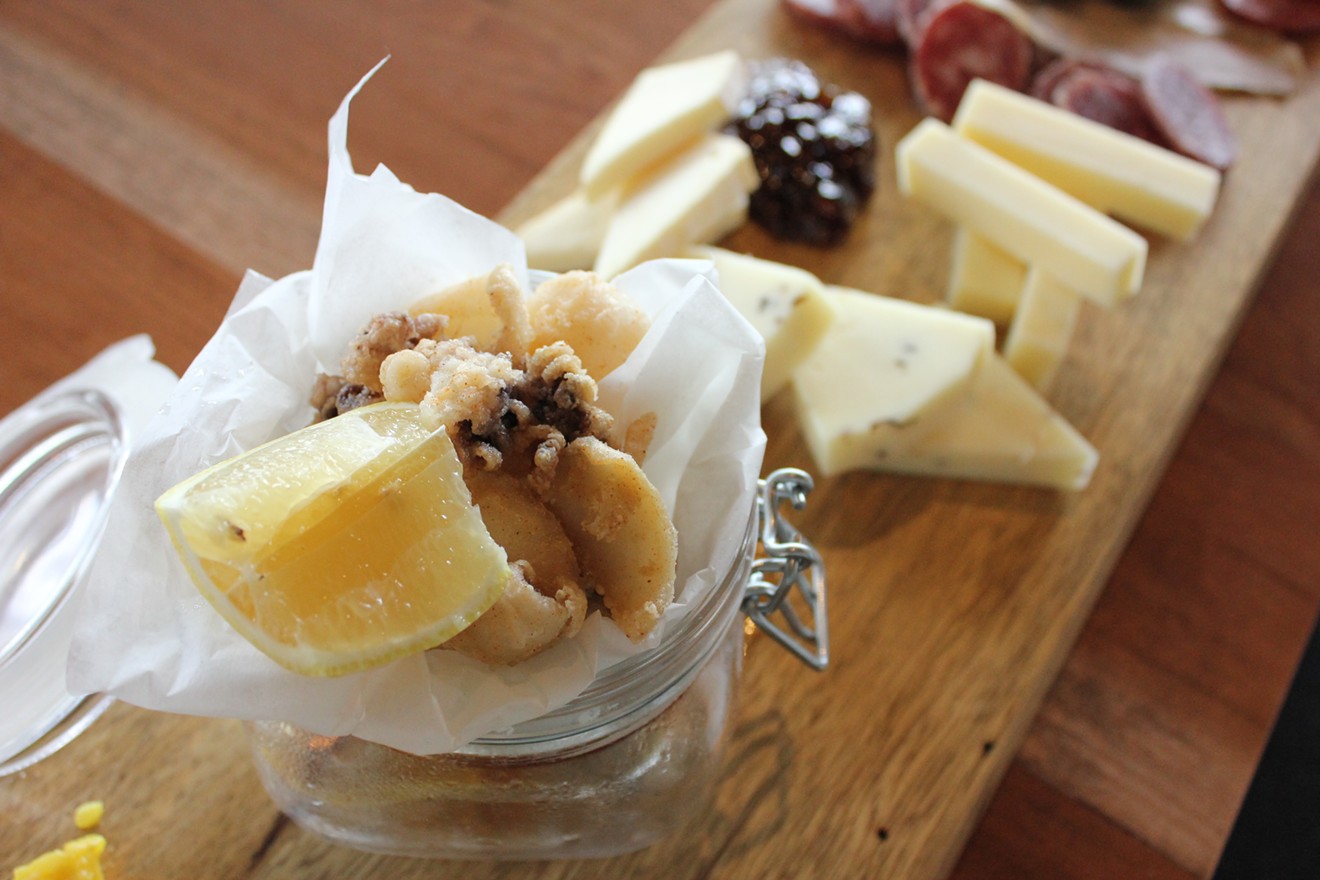 Fried cuttlefish on an appetizer board Chris Malloy
Metro Phoenix enjoyed a spate of unexpected restaurant openings toward the end of 2017. Three of these can't-miss restaurants come from that time, spots where the buzz is as thick as the tomato sauce and sizzling onion smells wafting from the kitchens. The fourth spot, another gem, opened in the vacated home of an old favorite—and right in the middle of a stellar Phoenix food hall to boot. Here are four restaurants that you should consider checking out. 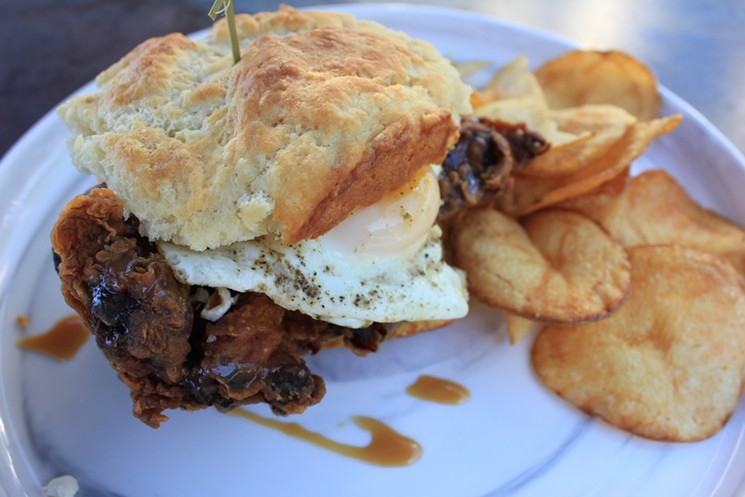 Yes, you are looking at a fried chicken sandwich with caramel and popcorn.
Chris Malloy
The Provisionary in DeSoto Market
Back in July, some of the air was let out of DeSoto Market when The Larder + The Delta closed. But Jeremy Armstrong, sous chef, stuck with themarket — where he now oversees all food — as well as the The Larder + The Delta's former space. That space is now home to The Provisionary. Like its esteemed predecessor, The Provisionary prepares a strong slate of Southern food. "That's my background and that's what I'm comfortable cooking," Armstrong says. The Provisionary sure puts the pedal down with its sandwich offerings, which include an espresso-rubbed pork with pickled onions and charred onion aioli on a brioche bun, and avocado mousse on a turkey melt. There's even a fried chicken sammy with caramel and popcorn.

Tomatoes and buffalo mozzarella.
Chris Malloy
Pa'La
Claudio Urciuoli, who cooked at Noble Eatery for four years, has taken the stove at his next endeavor: Pa'La. Urciuoli opened the Phoenix restaurant to strong hype in late 2017. Using nothing but wood-fired heat sources (oven and stove), Pa'la creates  "dishes that reflect the seafood, grains, and vegetable-driven coastal cultures of the Mediterranean and South America." The menu changes every day.That menu is divided into three sections: tapas; schiacciata (Tuscan flat breads); and an entree-like section of rice, grains, and fish. Head-on shrimp swivel heads as kitchen staff whisk them to tables on the spacious porch.

Downtown Deli Tavern
Shawn Campbell Shoots
Downtown Deli Tavern in Downtown Phoenix
Downtown Deli Tavern recently opened its doors at Monroe Street and North Central Avenue in downtown Phoenix, bringing the count of metro Phoenix eateries to an even dozen for Genuine Concepts, the hospitality group behind Ladera, The Vig, and others. Justin Woodard, formerly of The Vig, is executive chef. He and his team focus on a selection of typical American classics, eats like salads, burgers, and sandwiches. The menu contains comforting staples like meatloaf, hashes, omelets, egg salad sandwiches, and apple pie. Coffee costs just $.50. Breakfast is served all day. And rumor has it there's a fried peanut butter and jelly on the menu.

Mafalde pasta with tuna meatballs.
Chris Malloy
The Sicilian Butcher
Joey Maggiore, of Hash Kitchen and The Maggiore Group, launched this Sicilian restaurant in Scottsdale in the early days of December. The restaurant features craft meatballs, all kinds of takes on the humble dish that come all kinds of ways. Once you've picked a meatball, you select one of nine sauces from a roster that contains the likes of vodka sauce, carbonara, and Sicilian almond pesto. Finally, you select a “bottom” to come under your meatballs: fresh pasta, risotto, gnocchi, salad, or bread (for a meatball sandwich). A selection of housemade pasta is on the menu. So are various boards. One features Sicilian street foods such as panelle (fried chickpea flour) and fried cuttlefish.