Five Chinese Specialties to Try This Weekend in Mesa and Chandler 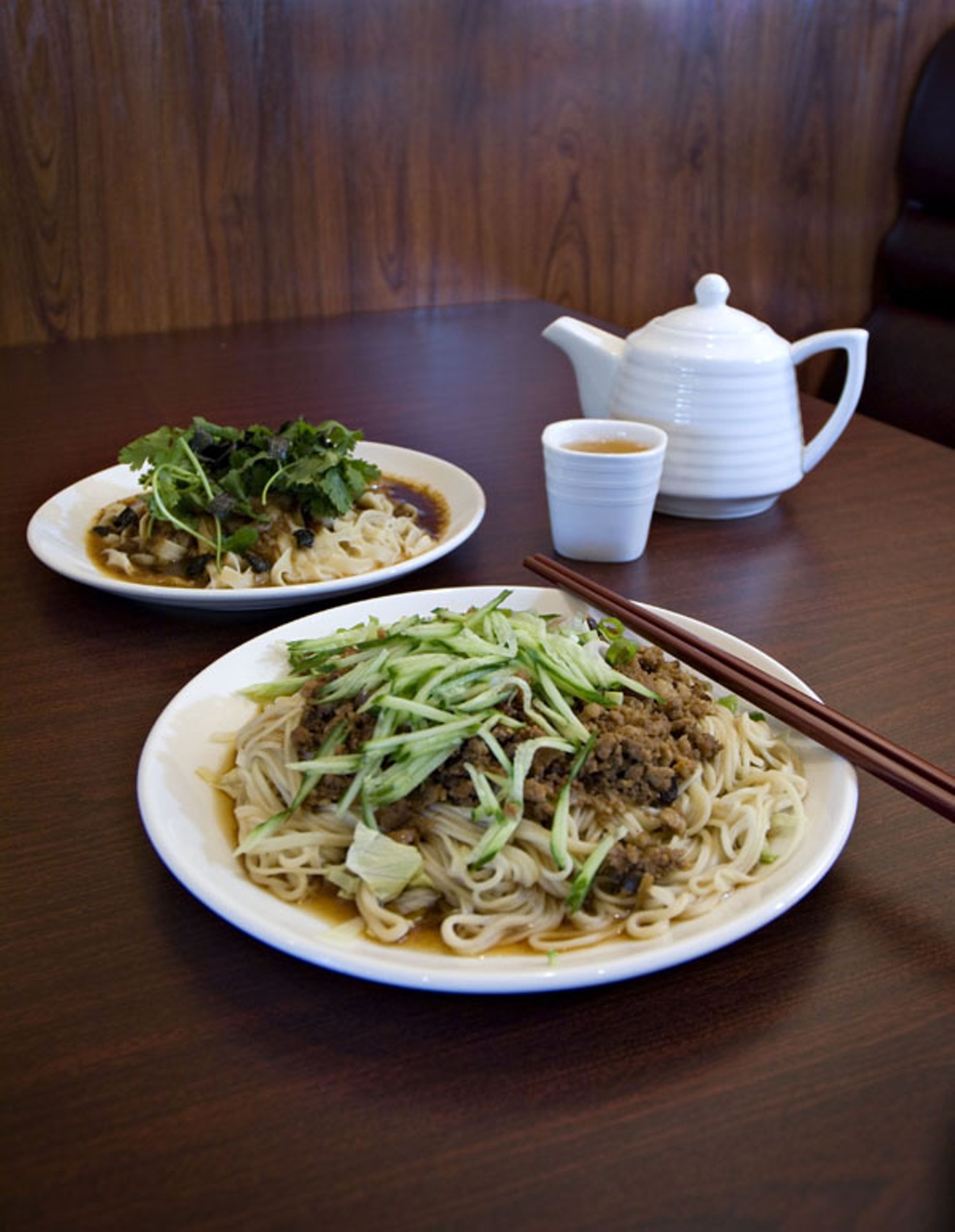 Jackie Mercandetti
Chinese cuisine is far more diverse and interesting than the take-out staples like sweet and sour chicken or kung pao shrimp that most of us pick up the phone to order. There is great, authentic Chinese regional cuisine right here in Phoenix, with many of the most interesting restaurants concentrated in Mesa and Chandler. So, make a plan this weekend to head down to those 'hoods to seek out these five Chinese delicacies.


Hand-Pulled Noodles in Chandler
Quickly, but gracefully, the noodle maker's hands work a piece of dough into a thick loop, stretching and slinging and spinning it around, then pulling it apart to create finer and finer threads laced between his flour-dusted fingers. Every time an order comes in at China Magic Noodle House, chef Zhang Qiang grabs another piece of dough and begins again. Owner Bin Li, who came to the Valley from New York City, offers a simple menu of hand-pulled, made-to-order noodles in the style of the Lanzhou region of northwestern China. There are also some Hong Kong-style appetizers, fried rice, and fruit smoothies filled with chewy boba (which are practically a meal unto themselves).Choose from five kinds of noodles: Thin, thick, wide, shaved (thin slices carved off a block of dough with a sharp knife), and vegetable. While they all taste like, well, noodles, and are much more tender than the dried versions, you may find you favor certain ones, depending on the dish. For example, we loved the way the wide noodles tasted when pan-fried, while we preferred the thin variety in slurp-worthy soup.

“Sheep elbow” is a hidden gem at Heng’s Kitchen.
Jackie Mercandetti
Sheep Elbow in Mesa
Heng’s Kitchen is a small counter-service Chinese restaurant tucked into a rather obscure corner of the food court at Mekong Plaza in Mesa. It might be the least flashy restaurant at Mekong, situated right by the restrooms, and far removed from the glittering chandeliers and flat-screen TVs of the plaza’s more decorous sit-down restaurants. However, don’t judge this tiny food stall by its meager square footage and lack of ambiance. Heng’s offers an extensive menu of traditional Chinese dishes (more than 100 at last count), including a pretty broad repertoire of Shanghainese and Sichuan specialties you’d be hard pressed to find elsewhere in the Valley, like the intriguingly named “sheep elbow.” The dish, it turns out, is  a lovely braised lamb shank served in a dark, complex gravy scented with five spice and ginger. The sauce is deep and vaguely sweet, the earthy, succulent quality of the braised meat offering reason enough to pay a lunchtime visit.

Chinese Hot Pot in Chandler
The Sichuan-styled spot called Chengdu Delight Chinese Cuisine is named after the capital city of Sichuan province, which is pretty much synonymous with the region’s polyglot, peppercorn-laced cuisine. The essential dish at Chengdu Delight may well be the hot pot, a Sichuan staple that revolves around a scarlet-colored chile broth that bubbles and froths from a chafing dish like liquid-hot magma. These Chinese hot pots are not presented in the traditional cook-it-yourself format, wherein you dip raw, pink slivers of meat into roiling hot liquid until they stiffen and cook. Here, all the ingredients have been stewed together for you, and served up hot and bubbly on a portable burner, so that your only task is to fish out the bits of meat, tofu, and veggies with your chopsticks. There are various configurations on the menu, but the default order is the so-called “spicy hot pot,” which features chicken, shrimp, and tofu simmering in the peppercorn-inflected broth. The chicken is extra-spongy and garlicky, the shrimp buttery and rich, and even the humble tofu is deliciously sluiced with rich, spicy chile sauce. The chile broth is the unmistakable star of the dish, infusing everything it touches with notes of garlic, chile, and salt. The flavors are simple, yet together they become complex and rich. It should go without saying that the longer you let the bits of meat steep in the broth, the spicier and richer they get.

Hungry diners await the dim sum at Mekong Palace Restaurant.
Jackie Mercandetti
Dim Sum at Mekong Palace in Mesa
You probably already know that dim sum refers to a type of meal, one most often enjoyed on the weekends, featuring a roster of bite-sized dishes that are enjoyed with tea. The “Chinese brunch” tradition of dim sum originated in southern China, in Guangdong (formerly Canton) province. It’s most closely identified with Hong Kong, the dim sum capital of the world, where the format that we recognize today first took shape in the 1950s. In Mesa, the bustling Mekong Plaza shopping mall has become a destination for families, shoppers, and lovers of Vietnamese, Taiwanese, and regional Chinese cooking, among others. The mall is anchored by the Mekong Supermarket, but it’s also home to more than 20 other shops selling Chinese pottery, jewelry, cellphones, and medicinal herbs. There’s even a small shop dedicated to selling jerky. Part of the fun of coming to Mekong for dim sum is the window shopping that inevitably follows. But first, take a seat and scan the carts for ha gow (shrimp dumplings wrapped in tapioca-starch wrappers), featuring a snappy, fresh shrimp-ball nucleus; Cha siu bao (barbecue pork buns), which are yeasty and fluffy, with a deliciously rich sweet-savory pork and gravy center; and oyster sauce-sluiced Chinese broccoli. Also don’t miss the cheong fun, slippery rice noodle rolls wrapped around seasoned beef, anointed with a wonderful sweet soy sauce. For dessert, try egg tarts— the ones here are a little eggy and perfectly sweet.

Felicia Campbell
Cheese Tea in Mesa
Chinese cuisine is not all about the old school, there are new creations well worth seeking out as well. One such new wave specialty is Chinese whipped-cream-cheese-topped teas, which are all the rage in Singapore and China. The unfortunately named "cheese tea" sounds pretty gnarly, invoking images of Cheddar melting into a cup of Lipton. In this case, the cheese topping is a whipped combination of milk and cream cheese, sprinkled with matcha (green tea powder). The cheese whip is not very sweet, but not salty either. The cheese topping is lighter than whipped cream, with a slight saltiness balanced by a subtle sweetness; like an airy, delicate cream cheese frosting. The tea upon which the cheese floats is not a syrupy peach tea, but an unsweetened tea with the grassy, herbaceous quality of good green tea. It is not sweet in the least, but tastes fresh and earthy. Go watch Chinese music videos with the Asian kids on Dobson, and raise a glass of cheese tea to one of the oldest food cultures in the world, which keeps right on evolving.