A Field Guide to Becoming a Beer Expert in Phoenix

2016 was all about PC and politics. Let's make 2017 the year of beer. Dave Clark
It's a new year, and all your friends are busy swearing off sweets and vowing to work out daily. But you aren't like them; you want to take it up a notch. Why not make 2017 the year dedicated to beer? Whether you have high aspirations of becoming a professional brewer, or if you simply want to know why sometimes your beer smells like skunk or tastes like cardboard, we're going to introduce you to the resources you need to know all the ins and outs of beer. Just like the variety of beers available, there are multiple roads to travel and many ways to achieve your goal of increasing your brewing knowledge.

Regardless of which path you take to increase your brewing knowledge, some of the key components will be the same. You will learn about beer styles, beer lingo, off flavors, how beer is made, and if you're really interested, how to properly serve the beer and what to serve it with.

Way back in 2006, my goal was to become a brewer and a beer judge, and these two things go hand in hand. The first thing I did was join my local homebrew club. There are a few clubs here in the Valley, the most notable, and largest, being A.S.H. (Arizona Society of Homebrewers). They meet on the third Tuesday of each month and also have monthly social events where you can congregate with other brewers and learn from people who are already doing what you hope to do one day. ASH typically meets at its Scottsdale headquarters located at 2515 North Scottsdale Road, Scottsdale Check out the website for more information about the group. But by no means is ASH your only local option. There is Brewmeister's Anonymous in Buckeye, the SCW Zymurgy Club in Sun City West, and several others. A comprehensive list of homebrew clubs across the country and in your backyard can be found on the Brewer's Association website.

Becoming a member of the American Homebrew Association is also a fantastic resource that enables you to access their extensive database of information, talk to other brewers across the nation, and membership includes a year's subscription to Zymurgy Magazine.

In addition to learning from others, I also wanted to increase my knowledge as quickly as I could on my own. I subscribed to several brewing-centric magazines, such as Brew Your Own, All About Beer, and Zymurgy, mentioned above. These magazines covered the art of brewing, building brewing systems, how to identify and avoid off flavors and how to pair beer with certain foods. Of these, Brew Your Own is probably the quintessential publication for someone who wants to learn to brew while All About Beer will give you a lot of information on beer styles. And, most of these magazines have content that appeal to the newbie and the experienced brewer alike. You can also access a lot of beer and beer-style information through websites such as ratebeer.com and beeradvocate.com.

The official logo of the Beer Judge Certification Program.
BJCP Website
Learning how to judge beer and working toward becoming an actual beer judge teaches invaluable lessons in most aspects of brewing. The Beer Judge Certification Program, known as the BJCP for short, is an organization formed for the betterment of beer knowledge. Through this program, you can learn styles in great detail and understand off flavors: where they come from, what they taste and smell like, and how to avoid them if you are brewing. You'll also learn what commercial examples are considered the best examples of each style and substyle of beer. There is absolutely no better way to learn than to get a bottle of one of the commercial examples, and smell, taste and feel that beer while you are reading the BJCP style guidelines. Doing this will help you understand the terminology used in the beer industry and give you a hands-on active learning experience.

Though there are several levels of BJCP judges, you can simply start your journey as an apprentice and work your way up if you find it to be of interest to you. Judging is a fun way to spend time with like-minded individuals who can help you to learn and identify different flavor components of beer and eventually be able to differentiate a good one from one not so good. If judging appeals to you, you can rise through the program from apprentice to recognized, certified, national, master or even grand master judge. If the idea of judging is not your cup of ale, then you can always volunteer to be a steward at any judging competition. Most homebrew clubs are also closely affiliated with the BJCP, including hosting study sessions, which is another reason to check out a homebrew club and study to be a judge with friends. Check out the very user-friendly BJCP website for more information on the program or to get started. 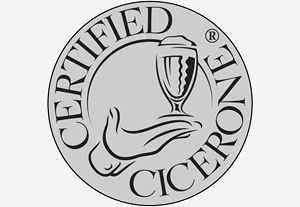 The official badge given to people who pass the Cicerone test by scoring an 80 or above.
Cicerone website
If judging doesn't seem like your thing, but you're still looking for a well-rounded knowledge of beer, the Cicerone program may be what you are looking for. There are now four levels of Cicerone certification, beginning with the fairly easy "Certified Beer Server" level which, once passed, proclaims you are qualified to talk intelligently about craft beer. This is perfect for someone working in the hospitality industry as a server or bartender who wants to have a solid grasp on the products they are serving. This level is also appropriate for party-throwers who want to be able to serve beer that will appeal to all their guests. The much more difficult "Certified Cicerone" level encompasses the five main aspects of craft beer: how to brew, understanding the styles, identifying off flavors, draft maintenance, and pairing beer and food. People in the beer industry, especially those planning to become brewers or brewery owners, would be wise to follow this path. For the super-advanced, there is also the "Advanced Cicerone" and "Master Cicerone," levels but those are only for the ultra beer geeks. In fact, there are only 13 Master Cicerones at the time of this writing, so it's certainly not for everyone. The advantages that the Cicerone program provides versus the BJCP is that it encompasses pairing beer and food, some draft quality knowledge, and the use of proper glassware; areas that are not covered in the BJCP. Cicerone's downside is that the gap between a Certified Beer Server and a Certified Cicerone is immense; whereas the gap between a "recognized" or "certified" BJCP judge is minimal; more like progressing through grades in school. To learn more about the Cicerone program, check out their website.

Regardless of what your goals are, doing any of the above mentioned studies, or better yet a combination of them, will help improve your beer knowledge relatively quickly and fairly easily. And, isn't it easier to keep a New Year's resolution when the resolution involves beer?