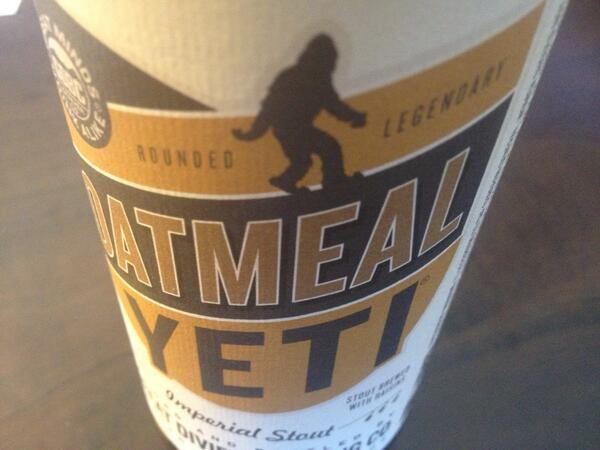 It's safe at this point to say it: the yeti exists. Scientists were skeptical for many years, but the evidence is overwhelming. Seasonal migration patterns have different species of yeti lumbering right through the middle of our cities, from the cappuccino-hued Espresso Oak-Aged Yeti that arrives near the start of the year to the Chocolate Oak-Aged Yeti, they of the slightly spicy demeanor, that comes soon after. Even the rare and wizened Barrel-Aged Yeti has been spotted on occasion, and we're discovering new breeds of this mysterious creature every day.

One such fresh arrival: the Oatmeal Yeti. A diet of rolled oats and raisins has given this variety a soft demeanor, rounding out the harsher, more bitter aspects often found in its brethren. The differences begin with the appearance: Oatmeal is clearer than most yetis in color, but is oddly thicker and more syrupy. The liquid in the glass seems to inhale the stuff flowing from the bottle, slowly forming a head as dense and long-lasting as cookie batter.

The wonderful and distinctive aroma of the Oatmeal Yeti is characterized by rich roasted malt, espresso, seared steak and dark chocolate. The raisins that make up its diet add notes of sweet dark fruits, while the smoke, orange zest and pine bark indicative of a yeti are there as well.

Oats make the Oatmeal Yeti smoother than any other variety, the grain forming a waterside to lead the beer smoothly across the tongue. Soft touches of oats plus sweet dark fruits round out usual yeti hop bite, while milk chocolate blends with the flavors of a sweetened coffee toddy and orange pith nibbles gently at the sides of the tongue.

Medium-full but not heavy, Oatmeal Yeti feels is soft as a down comforter. Booze and hops combine for a little peppery heat, but that's all that's noticeable of alcohol, save the haze that quickly settles over the brain.

The Oatmeal Yeti may not have the prominent flavors and bite of its more flamboyant brothers, but it displays more smoothness and drinkability than any. Capture this species for yourself as it makes its way through Arizona in August and September.