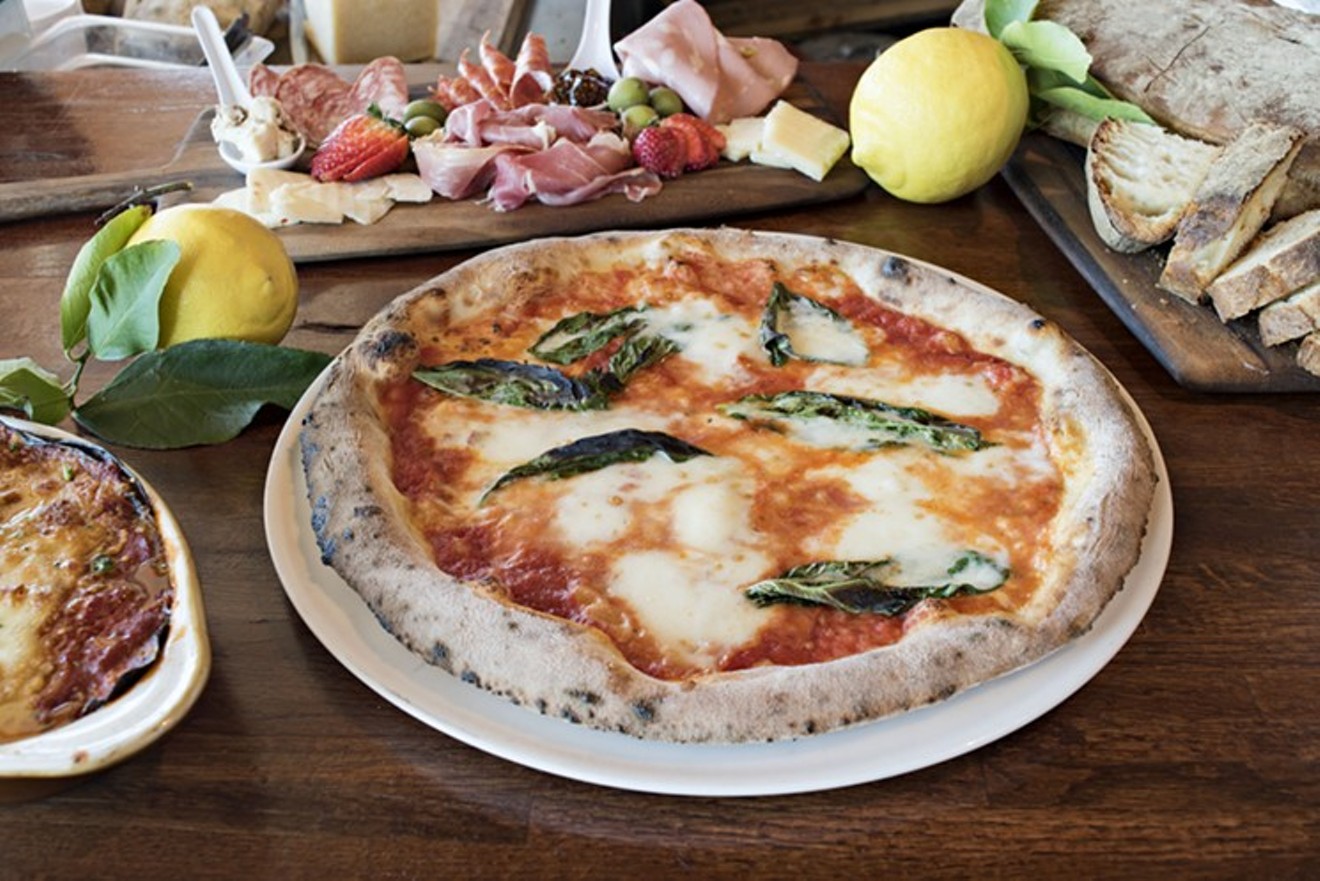 Margherita Pizza and other dishes from Fabio on Fire Jackie Mercandetti
The Salt River Valley is a country, an ocean, and a sea away from Italy. The arid climate feels so different from mountains and coasts, which run down the length of the Mediterranean's boot-shaped country. But the pungent aromas of basil and garlic float in the air here, too. Some of metro Phoenix's choice Italian restaurants collapse that distance, giving you a dolce vita state of mind by way of pizza, pasta, and drinks. Here are four eateries to look up today for a bomb Italian meal. 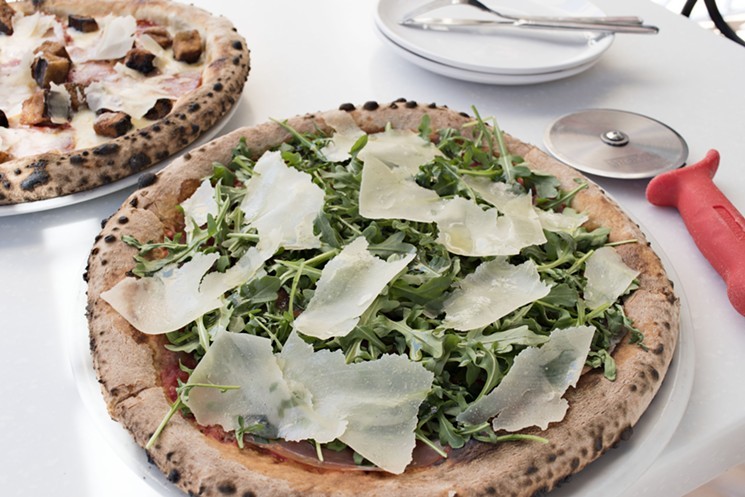 Michelangelo from Bottega Pizzeria Ristorante
Jackie Mercandetti
Bottega Pizzeria Ristorante
(19420 North 59th Avenue, Glendale)
Bottega Pizzeria Ristorante, which debuted last spring in Glendale, has a sprawling menu that offers a robust selection of fresh-made pasta dishes along with wood-fired, Neapolitan-style pizza. All the pasta is made in-house, and the selection veers toward classic northern Italian standards like tagliatelle Bolognese and tortellini in light cream sauce. You’ll also find less familiar hand-rolled pastas like trofie with pesto. Pasta aside, the main attraction at Bottega is its wood-fired pizza. Stand-outs include the Amalfi, a white pizza slicked with stretchy provola cheese and topped with crisped-up hunks of peppery soppressata and meaty cubes of fried eggplant. The Michelangelo pizza achieves a remarkable balance of flavor – buttery scraps of prosciutto meld with shaved parmigiano and the pizza’s faintly sweet tomato sauce.

Antipasto from Fabio on Fire
Jackie Mercandetti
Fabio on Fire
(8275 West Lake Pleasant Parkway, #101, Peoria)
Fabio On Fire might sound a little like a steamy romance novel, but this unassuming strip mall restaurant is serious about making top-notch pizza. It’s the first brick-and-mortar space from Italian-born chef-owner Fabio Ceschetti, whose mobile, wood-fired pizza oven has become a fixture at private events and farmer’s markets. Antipasti highlights include the bruschetta moderna – thick-cut slices of ciabatta Pugliese layered with prosciutto, mascarpone, and hearty flakes of shaved parmigiana. There’s a small pasta menu, which includes homemade gnocchi in a classic basil pesto sauce. But you probably came for the pizza. Highlights include the Capricciosia, layered with prosciutto and artichoke hearts, and brimming with the subtly marvelous flavors of San Marzano tomatoes and extra virgin olive oil. The Tarantina pizza marries sweet caramelized onions with spicy salami and the sublime funk of gorgonzola cheese. And the Diavola, with its exquisitely simple combo of tomato sauce, mozzarella, and spicy salami, is irresistible. 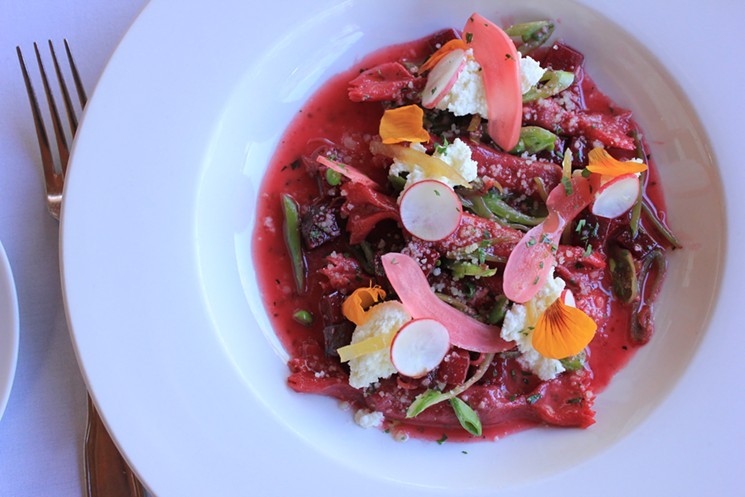 Beet carmelle from Quiessence
Chris Malloy
Quiessence
(6106 South 32nd Street, Phoenix)
Dustin Christofolo is rolling out beautiful beet caramelle pasta at Quiessence in south Phoenix. Caramelle is a stuffed pasta, like ravioli or agnolotti, but shaped like salt water taffy: long, skinny, with twists on the ends. The filling goes in the tubular middle. Christofolo uses a hand-crank machine to make pasta. He has rolled pasta in Italy and learned from afar from some of modern pasta's luminaries, like The Geometry of Pasta and San Francisco's Flour + Water, one of the country's top pasta restaurants. Christofolo prides himself on using ingredients from Soil & Seed, the garden at the Farm at South Mountain, the south Phoenix complex that Quiessence also calls home. Beets from the garden color the caramelle, which tastes earthy and a little sweet. The dough for the caramelle is mixed from beets, eggs, salt, and Hayden 00 flour. The only way you could get any fresher would be to mill the flour yourself. 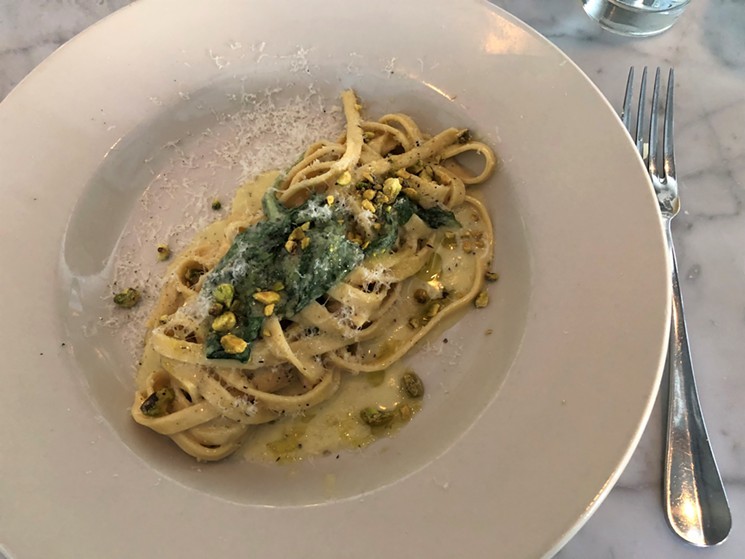 Tagliatelle with lemon from Tratto
Chris Malloy
Tratto
(4743 North 20th Street, Phoenix)
Fresh pasta and fresh lemons are one of Chris Bianco's favorite combinations. Bianco is two years into Tratto, a restaurant that takes Arizona’s headiest agricultural products and filters them through a casual but sophisticated Italian-style Trattoria and Bianco’s unique mind. Take tagliatelle, the Caesar of pasta shapes. At Tratto, the kitchen crew shapes tagliatelle from a blend of Blue Beard durum, White Sonora Wheat, and Two Wash Ranch eggs. Using these grains makes for pasta with more attitude than your typical silky, white-flour strand. Chef de cuisine Cassie Shortino adds lemon juice to cooked tagliatelle at the end. Tagliatelle historically gets paired with heavyweight sauces. To eat tagliatelle with a bright sauce that coaxes the most from lemon via olive oil's lushness and Parmesan’s umami is a wild thing. It’s about the lemon. It’s about the pasta. It’s about the gentle crunch of broken pistachios, the slurry of cooked greens, the snow-dusting of grated Parmesan.