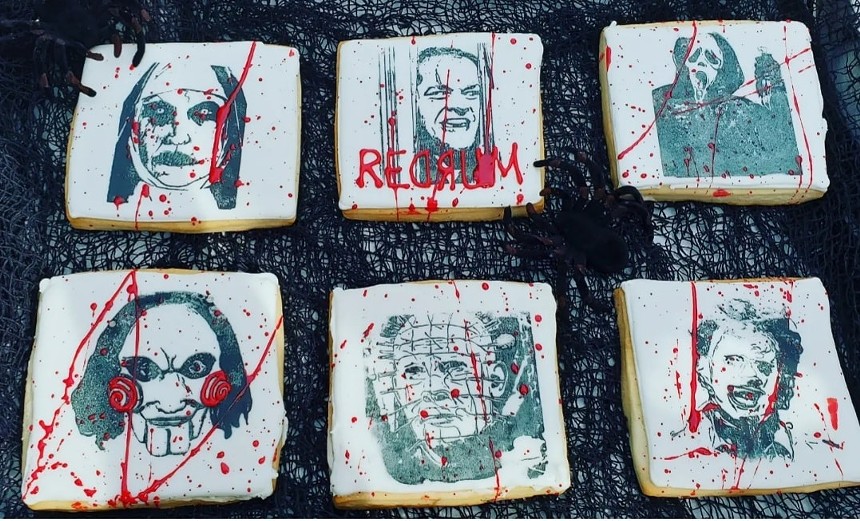 Murder cookies, anyone?
Infinity Sweets
Stephanie Brimley has had some strange requests.

“There was this one lady who didn’t really like cake,” says the owner of the Central Avenue bakery known as Infinity Sweets. “But she liked peach cobbler. She wanted a cake that wasn’t a cake. I had to funnel out a cake and pop a peach cobbler inside of it. I shoved a whole pan of peach cobbler inside that cake — it was so not cute. I’m like, 'This is not even the point of having a cake.' That was weird.”

The client brought in the ingredients she wanted Brimley to use: cocoa flour, coconut nectar, and xanthan gum. “I baked the cake and it tasted so awful,” she remembers. “She tried it and was like, ‘This is the best cake I ever ate!’ I was like, ‘What?’ It was dense and heavy and horrible, and she thought it was the yummiest cake on the planet.”


These are the sorts of things that happened when you set out to make beautiful pastry that also tastes good, Brimley says. In a lot of bakeries, she confides, the pastries look great and taste lousy.

“I know how to make things look pretty to the eye and also taste really delicious. This is my thing.”

Making her mark on the local baking scene was also Brimley’s thing. Raised in Chicago, she moved to Phoenix six years ago and has been using her Cordon Bleu pastry arts degree to shake things up with cotton-candy dipped cookies, and her version of whoopie pies and house-made eclairs. She started out hawking her sweets at local farmers' markets before becoming pastry chef at Infinity Sweets. When the bakery’s owners announced plans to close last year, Brimley bought Infinity and got busy settling the buttercream score.

“I hate it when bakers try to pawn off Crisco and powdered sugar as buttercream,” she says. “I’m like, ‘That’s not buttercream, guys.’ It’s cheating, that’s what it is.”

Stephanie Brimley creates custom desserts.
Stephanie Brimley
Brimley’s bugged by fake baked goods, too. “There are shops in this town that claim everything they sell is homemade, and it’s not. They use boxed cake mix and frosting that comes in tubs and stuff. It’s all an illusion. I won’t have it.”

Instead, she uses whole ingredients to create what she calls edible art. Her tarts are tiny sculptures of fruit, dough, and custard; her cakes are fondant-draped monuments carved from vanilla sponge, and dressed by hand with flowers and handmade sugar candies. All are made from scratch.

“Then we have the dessert tacos,” she says. “They’re like tacos, only they’re sweet. I just made a batch of apple pie tacos that had cheesecake and cooked apple compote topped with ice cream and whipped topping.”

Brimley is keen on using savory dish ideas as sweet inspiration. “I’ve got what I call the Ultimate Dessert Nacho. Basically, you have your tortilla chips made from cinnamon sugar and brownie chips, stacked with cheesecake crumbles and maybe some caramel. I definitely don’t want someone to go down the street and get the same product we sell, so I’m always working to think outside the box.”

She’s trying to raise money for a generator for her mobile bakery van, which she wants to park at weekend markets downtown. Meanwhile, Brimley’s reputation for custom baking presents an occasional challenge. “People know me as the baker who can make anything,” she admits, “so they come up with some wild things.”

One customer requested a NASCAR cake. “He wanted all the bells and whistles, the headlights had to light up, the wheels had to spin, the whole works. I said, ‘I can do that, but I need a whole weekend. He said to me, ‘But I saw someone make this on a baking show on TV and they did it in an hour.’ I’m like, ‘Let me explain to you about television editing.’”

More recently a client asked Brimley for a 3-foot-tall cake with an aquatic theme. “She wanted all these ocean things going around it, and when I told her the price she was like, ‘Bye!’”

Brimley huffs out a sigh. “I mean, she asked for a cake as tall as a 5-year-old. What did she expect?”
KEEP PHOENIX NEW TIMES FREE... Since we started Phoenix New Times, it has been defined as the free, independent voice of Phoenix, and we'd like to keep it that way. With local media under siege, it's more important than ever for us to rally support behind funding our local journalism. You can help by participating in our "I Support" program, allowing us to keep offering readers access to our incisive coverage of local news, food and culture with no paywalls.
Make a one-time donation today for as little as $1.