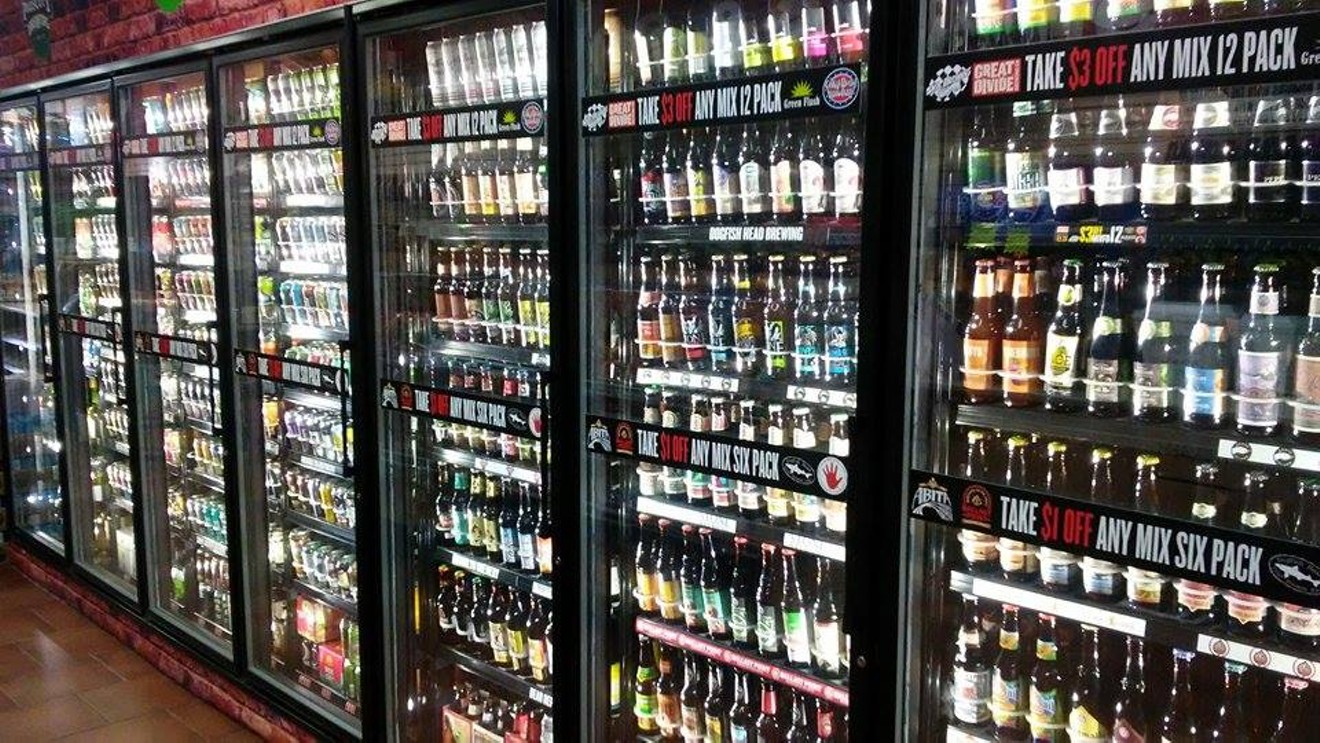 The all-singles fridge at King's Convenience features over 1,000 different bottle options to choose from. Mickey Salem
For true beer lovers in Phoenix, there are a growing number of great microbreweries, beer bars, and places to to shop for sometimes hard-to-find brews. Here we rounded up the seven best independent shops to fill your growler or grab a six-pack of that hard-to-find, special-release craft beer. 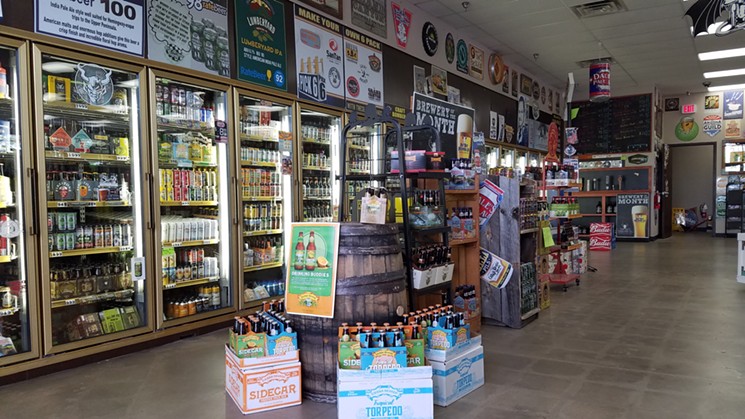 One of the most organized and neat bottle shops around, there is a tremendous selection of craft beer available at City Wine and Spirits in Mesa. Owner Adam Rahhal hires knowledgeable staff who are passionate about craft beer, so when you come into City Wine, you not only have a great beer selection, but also an encyclopedia of beer knowledge from which to learn. Besides being a strong supporter of local breweries, City Wine also provides an array of draft selections for growlers, many of which are rare, hard-to-find selections. Are you a homebrewer? Bring your CO2 tank to City Wine for $1.50 per pound refills. Multiple area hotspots within the Gilbert town limits boast great beer selections, but Desert Rose remains one of the best. Proprietor Ken Hightower is a craft beer lover who designed his beer haven to appeal to the most devout beer lover. You can find your mass-produced beers here, too, but it's really all about the craft, with 20 rotating taps showcasing new and rare selections and a wall of beers offering many local and national selections to choose from, including a wide selection of beers from Alpine Brewing of San Diego. 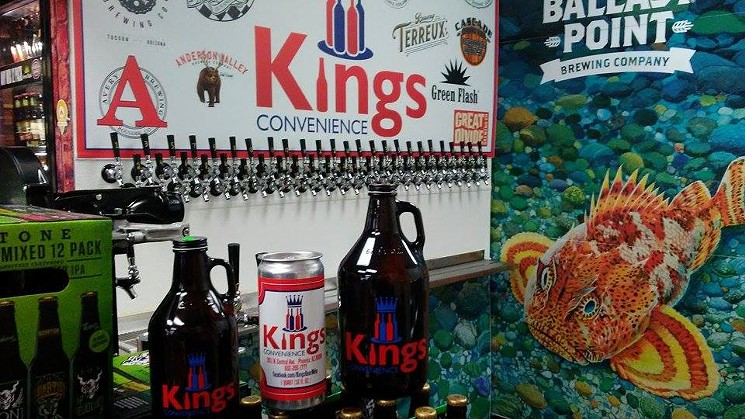 The wall of taps at King's Convenience in Phoenix showcases an unheard-of 54 craft tap options to choose from.
Mickey Salem
King's Convenience 2811 North Central Avenue
602-265-1777
With 54 craft beers on tap that are constantly rotating, King's also claims to be the only shop in the Valley that offers 32-ounce crowlers (canned on demand) at no extra charge. This craft beer wonderland also features an all-singles fridge with over 1,000 different bottles to choose from. King's is conveniently located right off of the light rail and is spotless, organized, and very easy to navigate. Chances are, whatever you are looking for, King's has it. 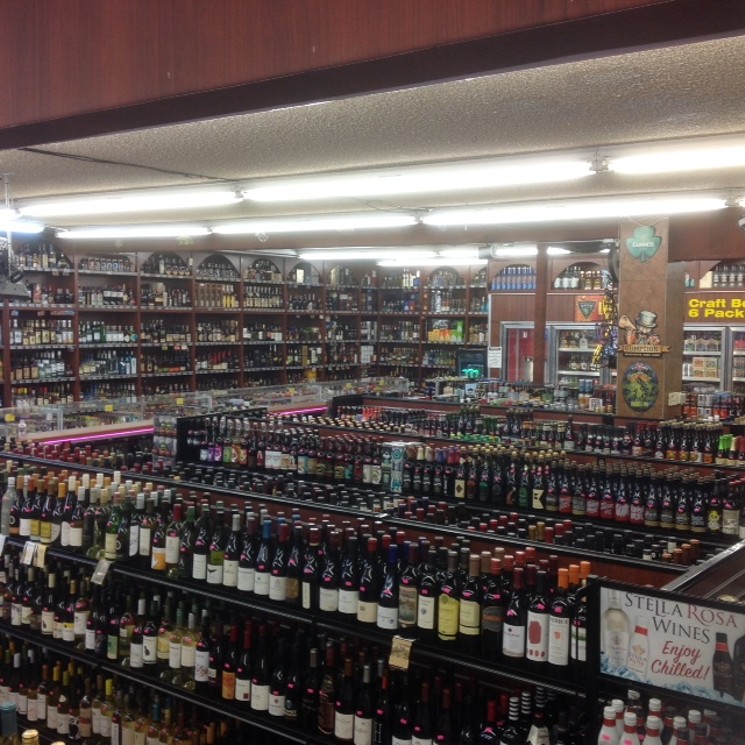 If you can't find what you're looking for at Liquor Express, it probably doesn't exist.
Kyle Delly
Liquor Express 1605 East Apache Boulevard, Tempe
480-967-3531

Over 1,500 different craft beers are available at Liquor Express, and proprietor Kyle Delly's incredible knowledge, which he passes along to his staff, makes this the place to go if you have a beer question. They've recently replaced their growler wall with additional cold space to ensure your beer stays cold and in pristine condition. Specializing in barrel-aged beer as well as in limited, hard-to-find special offerings, if there's a limited-edition beer that's being released, there's a good chance Liquor Express will have it, and if not, they can order it for you. Liquor Express offers a beverage-chilling service at no additional cost, allowing any beverage not already cold to be perfectly frosty after seven minutes in the chilling barrel. The shop offers year-round craft beer specials, sometimes featuring discounts as high as 80 percent off.

With an emphasis on new and local releases, Quick N Shine features 39 taps to fill your growler. The beer moves quickly at this Gilbert hotspot, so the selection rotates regularly. There are not one, but two beer caves, including one exclusively for craft selections. Quick N Shine also has a fine selection of cigars, full-service liquor, and kegs to go. No matter what time of day you visit Quick N Shine, chances are you'll see the proprietor, Mukesh, who is always listening to his customers and trying to help them find the next great beer. There's a great variety of Port Brewing/Lost Abbey bombers as well as an extensive selection of sought-after imports.

This longtime favorite of local craft beer enthusiasts has recently changed ownership and undergone something of a facelift. The new space is spotless, organized, and easy to navigate. And the selection is still fantastic. Take your chances on a "mystery box;" a box of beer you purchase at a deep discount, site unseen. You never know when you'll get lucky and find some keepers in there. Kegs to go can also be purchased here as well, but what makes Sun Devil so special is the hidden gem of a bar downstairs. The comfortable speakeasy feels miles away from the hustle and bustle one floor above, and features a rotating craft selection along with wines and packaged retail products.