3 New Spots for Street Food in the PHX 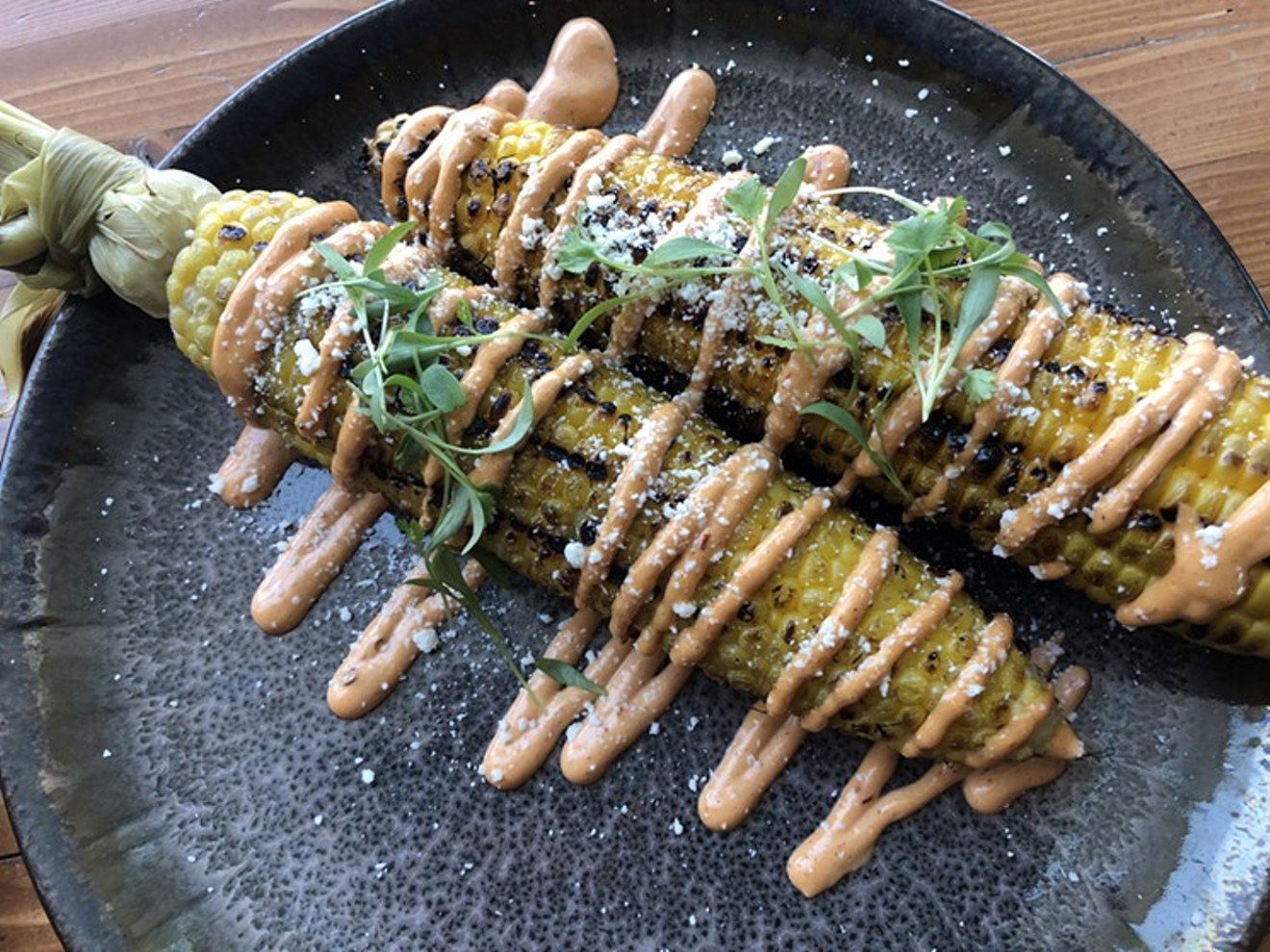 Elotes from Izzy's Pantry Chris Malloy
When it comes to street food, Phoenix is far from Bangkok or Istanbul. We have food trucks, sure, but no true highly developed street food culture. That makes new street food here all the more exciting. Here, we collect three new street food spots. They serve food ranging from elotes to dumplings. They pay tribute to some of the world's great street foods, and they can make for some great summer eating.

Banh mi with house-made chips.
Chris Malloy
Izzy's Pantry
915 North Central Avenue
The newly opened Izzy's Pantry will be cooking street food in Phoenix. Global street food. With no restrictions on place. We're talking specialties from Mexico and Vietnam and Sicily. The menu will change from time to time as Izzy, chef Israel Medina, wants to bring in new street-focused preparations. The menu is rife with favorites: street corn, tacos, ceviche, a host of salads, chorizo poutine, five sandwiches ranging from Cubano to banh mi, and sweets like churros and zeppole (Italian doughnuts). Medina has cooked in many familiar kitchens since moving to the state at the century's beginning, including at North Italia, Olive and Ivy, and Greenhouse. The many years Medina spent at North Italia show. Not counting Mexico, Italy has the most real estate on the menu right now. The highlight of the Italian offerings are arancini – fried rice balls. "In Italy, these arancini balls are awesome," Medina says. "I love risotto. Why not have it fried?"

An al pastor mulita from D Taco Pit in Laveen.
Patricia Escarcega
D Taco Pit
6020 South 35th Avenue (in front of the TCF Bank)
D Taco Pit is a relatively new taco truck that recently popped up in a suburban, taco-deprived corner of Laveen. You'll find the tall, lime-green taco truck parked inside the Walmart SuperCenter parking lot, in front of the TCF Bank near the intersection of 35th and Southern avenues. "There aren't many trucks like ours in this neighborhood," says Saul Aguilar, D Taco Pit's friendly host and order-taker. The menu is simple for now: Just carne asada and al pastor are available in various, sometimes cheesy, configurations. A bestseller is the al pastor mulita, a sandwiched taco oozing melted cheese and brimming with the pork's subtly sweet-spicy chile marinade. Carne asada, meanwhile, involves flavorful, aggressively seasoned beef, chopped into bite-size hunks and drizzled with a lovely guacamole salsa to cut the salt. Tacos aside, D Taco Pit also sells thick, meat-stuffed quesadillas, enormous nacho platters, and vampiros. It's a menu that's familiar and simple, but which never fails to thrill when it's done well.

The fried chicken bao with lemon sambal aioli at Bao Chow.
Patricia Escarcega
Bao Chow
31 West Southern Avenue, Tempe (inside Yucca Tap Room)
Metro Phoenix doesn't have a lot in the way of gua bao, the irresistible Asian street snack that's sometimes described as a "Taiwanese hamburger." Chef and restaurateur Corey Barnes hopes that her new culinary concept, Bao Chow, will introduce more Phoenicians to the pleasures of crave-worthy, flavorful bao. Bao Chow is the new kitchen concept located inside Tempe's beloved Yucca Tap Room. For folks who aren't very familiar with bao, Barnes likes to put the food in terms that any Phoenician will understand. "Gua bao is the style of bao we make. It's considered kind of a hamburger in Taiwan. But the way that I would describe it here to Phoenicians would be that it's basically an Asian taco," she says, laughing. There are five bao on Barnes' menu, including pork belly, fried chicken, bulgogi beef, and two vegetarian options — shiitake mushroom and agedashi tofu. On Tuesdays, as part of the kitchen's Beers and Baos night, Bao Chow offers a rotating option and two-for-one specials.
KEEP PHOENIX NEW TIMES FREE... Since we started Phoenix New Times, it has been defined as the free, independent voice of Phoenix, and we'd like to keep it that way. With local media under siege, it's more important than ever for us to rally support behind funding our local journalism. You can help by participating in our "I Support" program, allowing us to keep offering readers access to our incisive coverage of local news, food and culture with no paywalls.
Make a one-time donation today for as little as $1.
Chow Bella