David Spade will roll back into town on Friday night. dodge challenger1/CC BY 2.0/Flickr
You worked hard this week and deserve to play even harder this weekend. Over the next 72 hours or so, you can attend a hometown performance by one-time Arizona resident David Spade, get an eyeful of art at Third Friday, learn how to make zines, or meet famed voice actors. 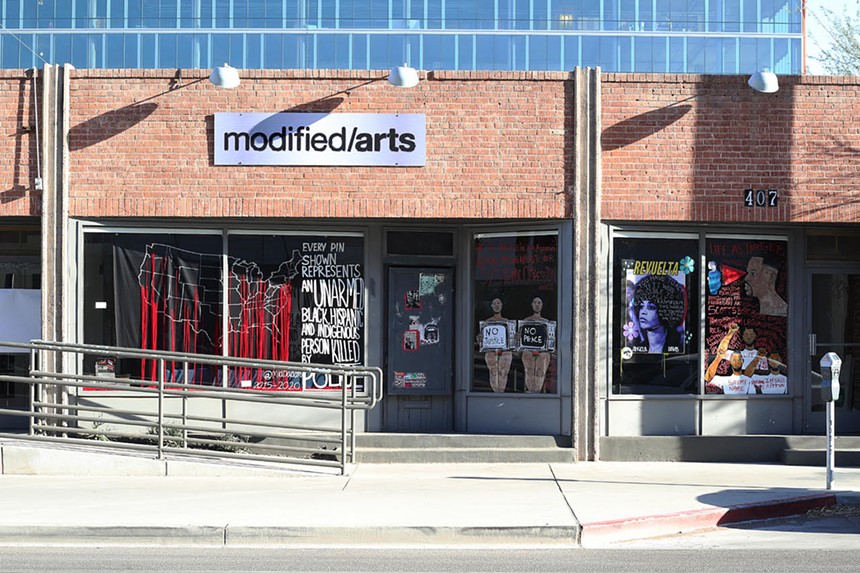 One of the main appeals of the Third Friday art walk in downtown Phoenix is the lack of crowds. Sure, there are groups of local culture vultures about during the monthly event, but nowhere near the hordes attending First Fridays. In other words, you can check out local works at the galleries of Roosevelt Row and Grand Avenue without having others jostling you or staring daggers your way. One of the highlights of this month’s event on Friday, September 16, includes Belarus-born painter Lola Panco’s exhibition “Internal Forces” at Modified/Arts, 407 East Roosevelt Street. Over at Five15Arts, 1301 Grand Avenue, printmaker and designer Harold Lohner will present his solo show “Prints of Men.” Hours for both galleries are from 6 to 9 p.m. Admission is free. Benjamin Leatherman

Years before he spent six seasons in the cast of Saturday Night Live, tag-teamed with the late Chris Farley in Tommy Boy and Black Sheep, or starred in sitcoms like Just Shoot Me, actor and comedian David Spade was an Arizona State University student working the local stand-up scene in the mid-to-late 1980s. So whenever the Emmy and Golden Globe nominee returns to his old stomping grounds for a hometown gig, it feels like a big deal. He’s scheduled to bring his Catch Me Inside tour to Celebrity Theatre, 440 North 32nd Street, on Friday, September 16. We’re guessing Spade will slip in multiple references (or digs) about the Valley between his usual sarcasm-laden bits and quips during the performance. The show starts at 8 p.m. Tickets are $40 to $50 via the Celebrity Theatre’s website. Benjamin Leatherman

Junk in the Trunk Vintage Market

Around since 2011, Junk in the Trunk is for the professional flea market shopper, or at least the ambitious ones. One of the biggest flea markets you'll find in Phoenix happens a couple of times a year, but it makes a big impact. The market attracts thousands to WestWorld of Scottsdale, 16601 North Pima Road in Scottsdale, and brings together vendors carrying everything from decor and trinkets to surprisingly expensive empty alcohol bottles. You'll also find food trucks and caterers on-site, so come hungry. It's worth noting that parking costs change with each event. Junk in the Trunk's latest Scottsdale Market event is from Friday, September 16, to Sunday, September 18. Advance tickets are $50 for Friday night from 4 to 9 p.m.; $25 for Saturday's early bird session from 8 to 10 a.m.; $8 for Saturday’s general session from 10 a.m. to 3 p.m.; and $8 for Sunday from 10 a.m. to 3 p.m. Phoenix New Times Writers

If you’ve been watching cartoons or anime since the '90s, you’ve heard the vocal talents of Keith Silverstein and Phil LaMarr. Both are esteemed voice actors who have played hundreds of roles during their respective careers. Silverstein is a well-known name in anime, having been featured in the Americanized versions of Monster, Bleach, Attack on Titan, Sailor Moon Crystal, and One-Punch Man, just to name a few. LaMarr is best known for voicing Hermes Conrad from Futurama and the titular protagonist of Samurai Jack, but has more than 250 credits on his resume, including roles in Invader Zim, Hey Arnold!, Kim Possible, and BoJack Horseman. Both actors are scheduled for a signing appearance from 10 a.m. to 5 p.m. on Saturday, September 17, at the Arrowhead Mall location of Toy Temple, 7700 West Arrowhead Towne Center, Suite 2238, in Glendale. It’s free to attend the event, but people are asked to sign up for designated time slots. Silverstein and LaMarr will also charge various prices for autographs or pictures. Click here for more information. Benjamin Leatherman

The exterior of Western Spirit: Scottsdale’s Museum of the West.
Bill Timmerman

Writer and illustrator Maira Kalman once described visiting a museum as “a search for beauty, truth, and meaning in our lives.” And on Saturday, September 17, metro Phoenix residents can engage in such high-minded hunts during this year’s Smithsonian Magazine Museum Day. A handful of local museums will offer free admission to the general public, including the Arizona Commemorative Air Force Museum, 2017 North Greenfield Road in Mesa, and Western Spirit: Scottsdale's Museum of the West, 3830 North Marshall Way. You can spend the day strolling through a particular spot while soaking up history, culture, and some of the aforementioned concepts on the cheap. Operating hours vary. Free tickets and a list of participating museums are available on Smithsonian Magazine’s website. Benjamin Leatherman

Long before he helmed a trilogy of Spider-Man films or brought Xena to life on television, director Sam Raimi created The Evil Dead, the low-budget horror film that’s widely considered to be a masterpiece. Rife with gore, mayhem, and Raimi’s particularly kooky visual style, the 1981 flick starring a young Bruce Campbell involves a group of college students staying at a cabin deep in the Tennessee woods and running afoul of supernatural forces. More gruesome and less comedic than its two sequels (particularly the ultra-quotable Army of Darkness), The Evil Dead became a favorite of movie geeks and horror fans after its release and helped spawn the careers of Raimi and Campbell. Local repertory film series Cult Classics will feature the flick on Saturday, September 17, at Landmark Theatres Scottsdale Quarter, 15257 North Scottsdale Road, Suite 230. The 9 p.m. showing is sold out but tickets are still available for the 9:30 p.m. screening. General admission is $15 and various VIP packages (which include perks like commemorative shirts and art prints) are $25 to $200. Benjamin Leatherman

If you missed out on the first weekend of this year’s Phx Zine Fest, which featured virtual workshops and panels, the good news is the second half of the annual event will take place on Saturday, September 17, and Sunday, September 18, at The Nile Theater, 105 West Main Street in Mesa, and include in-person activities. As with previous editions of the fest, which is put on by the Valley’s Wasted Ink Zine Distro, it will offer advice and tips on how to make your own DIY publications from dozens of local zine creators, artists, punks, indie publishers, and others. Hours are from noon to 5 p.m. each day. More details can be found here. Admission is free. Benjamin Leatherman
KEEP PHOENIX NEW TIMES FREE... Since we started Phoenix New Times, it has been defined as the free, independent voice of Phoenix, and we'd like to keep it that way. With local media under siege, it's more important than ever for us to rally support behind funding our local journalism. You can help by participating in our "I Support" program, allowing us to keep offering readers access to our incisive coverage of local news, food and culture with no paywalls.
Make a one-time donation today for as little as $1.