What's the Plan After #RedForEd for Arizona Teachers? 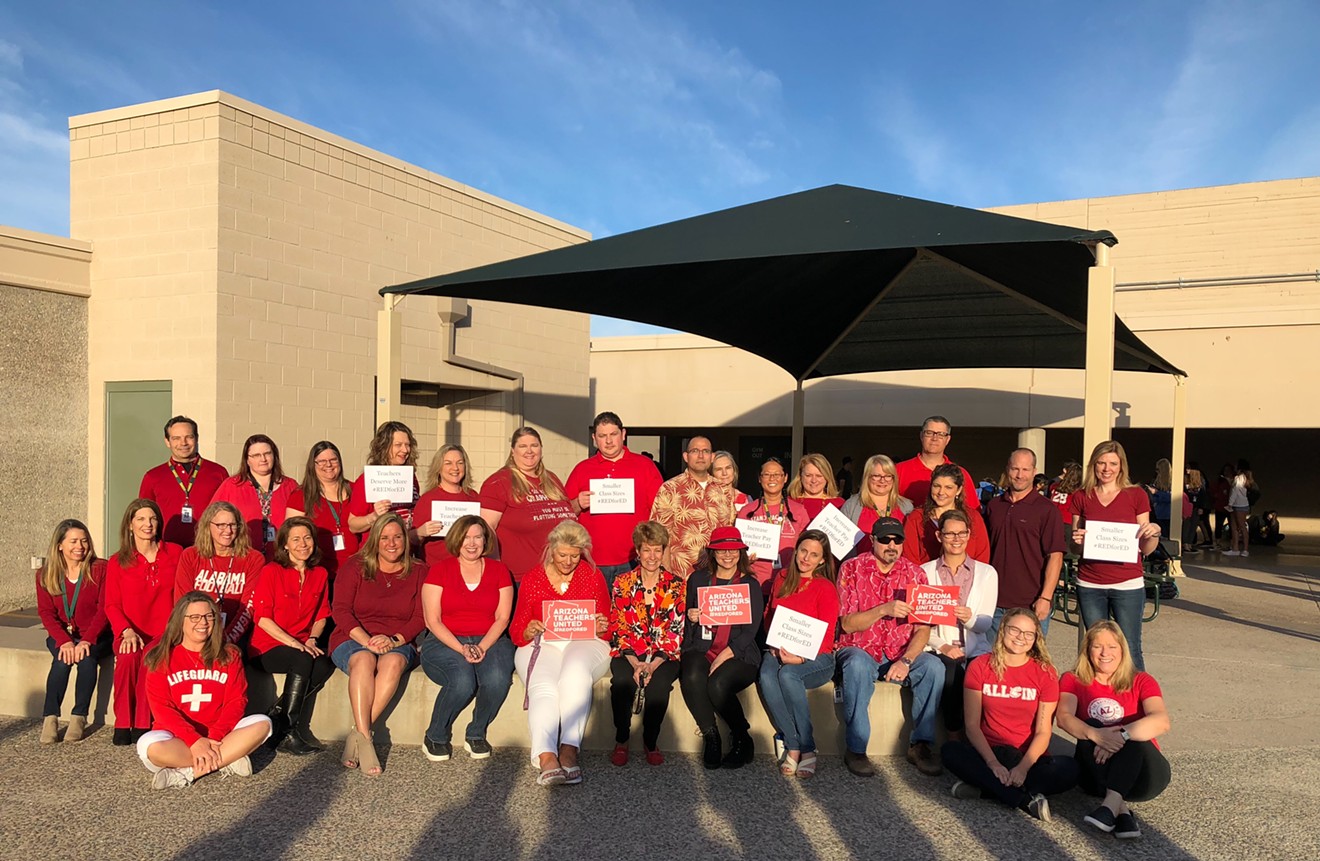 Staff at Desert Shadows Middle School in the Paradise Valley school district pose for a photo in the #RedForEd campaign on teacher pay. Courtesy of Deirdre Cronin
Arizona teachers turned their campuses into a sea of red on Wednesday, demanding better pay in the same vein of West Virginia teachers who successfully negotiated a 5 percent raise.

Inside the Facebook group that organized the #RedForEd campaign, a full-throttle conversation of what to do next is underway. Over 20,000 group members, many of them educators, are debating future actions.

Looming over every social media thread is the question of whether it's time for teachers to do more — a strike, walkout, or some other action to interrupt the status quo in Arizona.

That fact that so many supporters have joined the group in just a few days is frankly mind-boggling. The surge of interest happened when a group of teachers created the Arizona Educators United group last weekend, while watching the West Virginia strike play out in real-time. Principal organizers include Noah Karvelis of Tres Rios Elementary School in the West Valley and Derek Harris of Dietz K-8 School in Tucson.

The idea behind a walkout is to rattle Governor Doug Ducey and the state Legislature, forcing them to raise teacher pay more than the minuscule 1 percent, year-over-year increases that politicians have promised.

One thing is clear: A critical mass of teachers are sick of their bottom-of-the-pack salaries and crumbling schools. Many educators took group photos on Wednesday, picture-day style, standing in front of their school building or in the hallway. Democratic state legislators jumped on board the campaign, too.


#REDforED at Mountain Shadows Elementary...and it happens to be picture day! We love kids and our Ss deserve high quality, certified Ts who can afford to stay in the profession! #AZWhatIsThePlan? #investinAZ @arizona_sos pic.twitter.com/B7G6ROontp

When adjusted for cost of living, Arizona teachers are the lowest-paid in the entire country, battling for last place with Oklahoma (another state where teachers are considering a strike). Arizona's secondary school teachers earn a median annual salary around $46,000, according to the Morrison Institute at ASU; their peers nationwide earn an average annual salary of $58,000.

"Are teachers willing to strike if necessary?" one group member wrote on Tuesday, kicking off a mammoth thread of replies. "Let’s see how many would say yes. Like this post if your answer is yes or reply with yes. If you are hesitant, list why you are and what would ease it."

More than 1,500 people liked the post in response, and many any one-word "yes" replies left no room for doubt.

"It needs to be everyone like West Virginia," one teacher replied. "Our legislators will not listen if it doesn’t hurt them politically – just my opinion."

Others outlined specific fears, however, such as leaving their students in the lurch or inviting retribution from their employer.

But walkout proponents argue that because of an ongoing teacher shortage, it would be nearly impossible for districts or the state board of education to punish teachers. Because of the teacher crisis, as of right now schools would barely be able to function if even a few teachers walked off the job, much less all of them.

Group members emphasized that collective action statewide is way more powerful. A statewide walkout would achieve several objectives at once: It would draw instant media attention, put pressure on politicians to act, and protect teachers from any firings or administrative pushback.

In West Virginia, some teachers pointed out, the strike worked because schools shut down across all of the state's 55 counties.

Some people suggested half-measures as a compromise. "This has probably been mentioned already, but EVERY teacher uses a sick day on the same day," another group member suggested. "Teachers have the power, especially in a shortage. Need to flex."

Other groups like Save Our Schools Arizona, which is fighting a school voucher law via the referendum process, have seized on the campaign but stopped short of calling for a strike.

On Monday, the organization's spokesperson, Dawn Penich-Thacker, wrote in an email that Save Our Schools is not working toward a strike and instead is "staying laser focused on the No on Proposition 305 campaign."

Still, things are moving fast at the grassroots level. Organizers in the Arizona Educators United are currently asking interested teachers to become a "site liaison," tasked with organizing their campus and communicating ideas to the group's leadership.

As of Wednesday evening, according to organizer Derek Harris, 50 educators have said they're ready to take on the liaison role.