Open mic night by Aliento, an event designed for the community to hear voices of people without immigration status and DACA recipients. Isarae Koval
Earlier this month, a diverse group of people from all over the Valley gathered outside of Phoenix Hostel to slow down, join hands, and take a collective breath, from which the name Aliento derives.

The Aliento open mic is organized to provide a creative outlet for people of DACA and undocumented status and their allies. It provides a supportive space for their stories to be heard by the wider community. Everyone is welcome.

With a theme of "Breaking Ground,” the December 6 event drew in people who shared stories of breakups, breakdowns, and breaking into new territory.

"A lot of people never really get the answer they want because they are afraid to speak up. No one is really going to understand how you feel until you open up and express about it." said poet Ramon Zarate. "With 2020 coming and re-elections coming up, there's definitely a lot more to say about the topic. This is where we are really going to get our answer, if DACA is going to keep going or not, if deportation is going to become a bigger problem, or if it's going to decrease."

In his slam poem "Crossing," he recalled the emotions he experienced during his migration to America, with the lines “Brother, Mother, I / Reaching for the sky / Wishing we can fly / Right over these walls / Right over these laws / That try to keep us out.”

Throughout the night, attendees and speakers took breaks to mingle, enjoy free refreshments, and participate in creative exercises. The aim is to create a unifying experience that encourages participation. Many who had not planned on speaking in front of the group were emboldened to take the mic, with the mantra "courage over talent.” 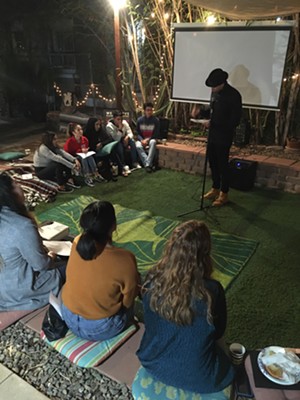 A speaker at Aliento's open mic on December 6.
Isarae Koval
Aliento is a community organization based in Mesa that is led by those who are most directly affected by immigration policy. It was founded in 2016 by Reyna Montoya, who experienced first-hand the stress and anxiety associated with being undocumented in America. She became aware of a collective need for creative modes of healing and empowerment for undocumented individuals and their families.

Nathalie Guevara, who recently joined the organization, said that events like the open mic create a sense of security for people that encourages them to open up and share their stories.

"Folks do feel that comfort, and because of that comfort, they take the step up to share their stories,” she said. “It's not about giving them a voice, because they have voices, but just making the space to be heard."

Several of the attendees shared intimate stories of the impact immigration policy has had on their lives, family, and identity.

One attendee, Angelica Pacheco, shared how she was personally affected when her father was deported when she was just 7 years old.

“It scares me to open up about my dad because I'm afraid that one day he'll be gone again," she said. He was pulled over one day on his way home from work for a cracked windshield and could not provide documentation.

The event occurred 10 years ago, but it was obvious as Pacheco shared her story that it remains fresh in her mind.

"I used to be kind of hidden in the shadows. When I was in my freshman year of high school, I would tell everyone that I was from Arizona because I didn't want people knowing I was undocumented, because I was scared. But having a voice is really empowering. It helps others around you come out."

Aliento’s next open mic will be on Friday, February 7.
KEEP PHOENIX NEW TIMES FREE... Since we started Phoenix New Times, it has been defined as the free, independent voice of Phoenix, and we'd like to keep it that way. With local media under siege, it's more important than ever for us to rally support behind funding our local journalism. You can help by participating in our "I Support" program, allowing us to keep offering readers access to our incisive coverage of local news, food and culture with no paywalls.
Make a one-time donation today for as little as $1.