The Arizona State Capitol. Sean Holstege
Arizona Commission on the Arts requested $2 million in arts funding from Arizona as part of the state's current budget process. But Governor Doug Ducey's proposed budget would give them zero dollars instead.

This has happened before. Typically, it doesn't stop the arts agency from getting at least some of the money it asks for, because the state has other ways of funding the arts.

Even so, it's not a great sign for the agency that's faced funding cuts in the past.

The Arts Commission is a statewide agency tasked with making art accessible to everyone in Arizona through several types of programs and grants. It’s one of more than 50 affiliates for the National Endowment for the Arts.

The commission requested $1.5 million for community investment and art learning grants, which are awarded through a competitive process to nonprofit arts and community service groups, schools, and municipal agencies.

It also requested $300,000 for creative-economy investments in rural and underserved communities, as well as $200,000 to expand a creative aging initiative beyond Maricopa County.

Un-Fragmenting/Des-Fragmentando (2017) by Lauren Strohacker, an Arizona Commission on the Arts grant recipient.
Lauren Strohacker
After Ducey released his budget, a statewide arts advocacy organization called Arizona Citizens for the Arts posted a related statement on its Facebook page.

“Arizona Citizens for the Arts is disappointed in this omission because we believe state support for critical arts initiatives complement many of the Governor’s expressed objectives to expand local economies, promote vibrant communities, and support the education of our young people,” it reads, in part.

Of course, Ducey’s proposed budget isn’t likely to become law. The Arizona legislature will release its own budget proposal in the coming weeks, and what finally gets adopted won’t totally match either one, says Rusty Foley, executive director for Arizona Citizens for the Arts.

She’s optimistic about the likelihood that the arts will be funded once the Governor signs a 2019 budget into law, which should happen in coming months. That’s because several legislators in both parties support the arts, Foley says.

But there’s another reason as well.

During four of the last five budgets, the arts have been funded using interest from the state’s rainy-day fund. 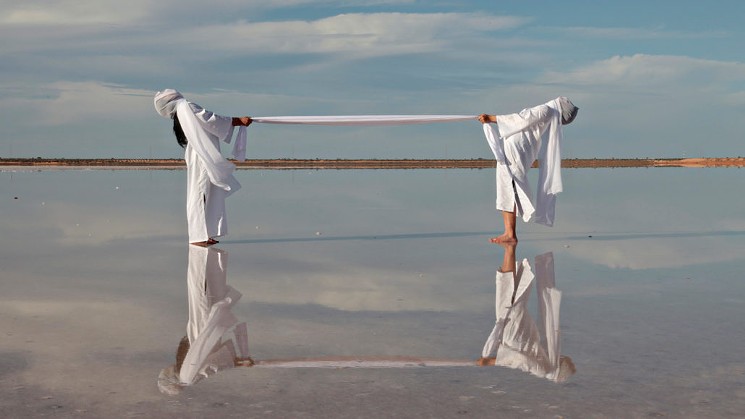 Sama Alshaibi, Wasl (Union) from the project “Silsila”, 2017, video, 9:27 min. (Alshaibi is an Arizona Commission on the Arts grant recipient).
Courtesy of the artist and Ayyam Gallery, Beirut, Lebanon and Dubai, UAE.
So, what would happen if the state passed a budget without arts funding?

The arts commission board, comprising governor-appointed members, would have to decide what to cut. “We can look to past experience to predict that if no funds are allotted, statewide grants may be reduced by as much as 60 percent,” a commission spokesman told Phoenix New Times by email on Wednesday, January 24. And several of its most innovative programs would be placed on hiatus, as well.

The former Art Tank program, which awarded grants based in part on audience votes cast after artist pitch events, was nixed after Arizona Commission on the Arts lost needed funding.

This time around, cuts could affect the new AZ Creative Communities Institute, according to the spokesman. That program pairs teams of creatives working in diverse disciplines with community members, to work on projects that directly impact their communities.

Foley says there are several ways artists and arts supporters can help the funding efforts, including inviting legislators to art events in their own districts, and contacting senators and representatives to urge them to support arts funding for 2019.

Artists and arts advocates gather for a previous Arts Congress at the Arizona State Capitol.
Arizona Dance Coalition
And art supporters don’t have to go it alone.

Arizona Citizens for the Arts is holding an advocacy event called Arts Congress on Monday, February 19. It’s a chance for artists and advocates to gather at the Arizona State Capitol, where their presence signals the importance of arts and culture to Arizona citizens. Attendees learn important advocacy strategies, and have the chance to visit legislators in small groups. Typically, several hundred arts supporters take part.

“This is a situation much like we had last year,” Foley says of this year’s budget process. There’s no funding in the governor’s proposed budget, but legislators and citizens can impact whether the arts get funded in the final budget Ducey signs into law.

“We have to focus on beefing up our support in the legislature,” Foley says. “And arts supporters need to be engaged in the civic process.”