The exterior of B.R.I. Taproom & Arcade along Main Street in Mesa. Benjamin Leatherman
Downtown Mesa’s bar scene has leveled up, thanks to the folks at the Beer Research Institute. In early April, the local brewpub opened a spinoff taproom and arcade on Main Street near Robson, which features 44 retro coin-op games and more than a dozen craft beers on draft.

The 4,000-square-foot business is downtown Mesa’s first-ever game bar. Owner Matt Tretheway says its mix of arcade and pinball games not only differentiates the place from BRI’s original location on Stapley Drive and Baseline Road, but also helps it stand out from other brew joints that have opened along Main Street in recent years.

“This one-mile tract of Mesa is going to be more brewery-dense than any tract of real estate in the entire Phoenix market, I believe,” he says. “And when we started to explore the idea of doing a [second location], I was like, ‘Let's make something really cool and something unique, like a taproom with an arcade.’”

The game selection at B.R.I. Taproom & Arcade rivals most other local game bars. Along one wall is a lineup of more than 20 joystick classics, ranging from standards like Street Fighter II and Galaga to choice rarities like Moon Patrol and the 1983 mechanical game Ice Cold Beer. There’s also a collection of vintage Nintendo arcade cabinets, including Donkey Kong and its two sequels, Popeye, the original Mario Bros., and a PlayChoice-10.

Elsewhere, you'll find Rampage, Ivan "Ironman" Stewart's Super Off Road, and Gauntlet, as well as a sit-down "cocktail" version of Qix and four-player favorites like The Simpsons and X-Men.

A majority of the arcade games come from the personal collection of Tretheway, a self-described “child of the ‘80s,” who began accumulating them within the last few years. And it started with the beer-slinging arcade game Tapper, which he thought would be a good fit for the Beer Research Institute. A collection of classic Nintendo arcade games inside B.R.I. Taproom & Arcade.
Benjamin Leatherman
“I mean, it’s just spot-on for a brewery, just a perfect fit. And in 2020, I found one I could acquire,” he says. “After that, I kind of caught the bug and a week later, I got Donkey Kong and then started buying video games.”

The B.R.I. Taproom & Arcade also has nine pinball machines on loan from local collectors, which are located along its west wall. It’s a mix of popular titles like The Walking Dead with such old favorites as Terminator 2 and The Creature From the Black Lagoon. 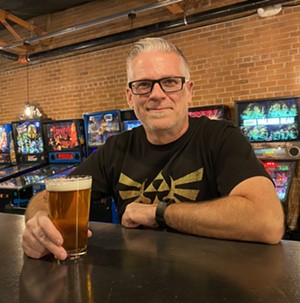 BRI owner Matt Tretheway.
Benjamin Leatherman
Everything runs on tokens, which the 47-year-old Valley says is part of “trying to keep a classic arcade vibe” he experienced while growing up.

“I was born in 1974, so I was alive when arcades came into fashion. I grew up on video games and they’ve been a part of my personal culture,” he says. “When I was in high school, I actually worked in an arcade for a couple of different summers. This is kind of a passion project for me.”

It took more than a year for Tretheway, a former executive with Cheba Hut and Cold Stone Creamery who’s worked in the restaurant industry for decades, to press start on the arcade bar. Originally projected to open last summer, the project was delayed due to issues with renovating its building (the former home of both a church and an art gallery) and its infrastructure, including problems with its plumbing that have since been resolved.

“This project has taken about a year [to develop],” he says. “I've opened 164 retail food establishments in my career. This has been the longest, most arduous process and project I've ever been involved in. But we’re open now, so it’s all good.”

The timing actually ended up working in his favor, as B.R.I. Taproom & Arcade debuted a few weeks before ZapCon, the annual classic arcade and pinball convention from April 30 to May 1 at the nearby Mesa Convention Center. (Tretheway says they’ll host both a pre-party and after-party for the event.”

“Opening right before ZapCon is super rad and a stroke of luck,” he says. “People can swing by beforehand, get a couple beers in, and then go have fun and play games [at the convention]. Then they can shuffle on back over, drink more beer, and get in even more games. Sounds like the perfect weekend to me.”
KEEP PHOENIX NEW TIMES FREE... Since we started Phoenix New Times, it has been defined as the free, independent voice of Phoenix, and we'd like to keep it that way. With local media under siege, it's more important than ever for us to rally support behind funding our local journalism. You can help by participating in our "I Support" program, allowing us to keep offering readers access to our incisive coverage of local news, food and culture with no paywalls.
Make a one-time donation today for as little as $1.