The annual APS Electric Light Parade is scheduled for Saturday, December 3. Arizona Public Service
Now that the Valley’s holiday season is here, you can expect plenty of related events and activities happening around the Valley. Case in point: This weekend, you can catch the annual APS Light Parade, Chandler’s tumbleweed tree lighting ceremony, or the Black Theatre Troupe’s annual staging of Black Nativity.

Other things to do happening from Friday, December 2, to Sunday, December 4, include Mexican wrestling promotion Lucha Libre AAA Worldwide making its debut and the return of annual events like the Phoenix Wushu Nationals, Tempe Festival of the Arts, and local geekfest LibCon West.

More details about each event can be found below. Need even more options? Check out Phoenix New Times’ online calendar.
click to enlarge 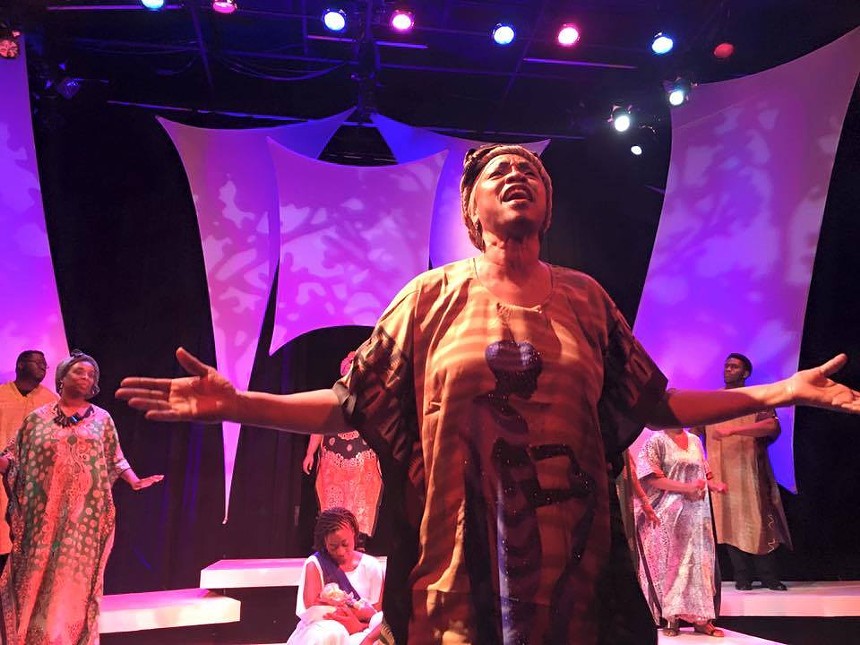 It’s been 61 years since Langston Hughes’ Black Nativity premiered Off-Broadway, and more than 50 years since the Black Theatre Troupe in Phoenix’s historic Eastlake Park neighborhood became the first black theater companies in the Southwest. You can celebrate both this season as the company brings its own bright production of Black Nativity directed by Walter Belcher back to the stage for its annual holiday run. The play retells the classic nativity story in narrative and song, exploring themes of hope, joy, and liberation. This year’s run starts with a performance at 7:30 p.m. on Friday, December 2, at the Helen K. Mason Performing Arts Center, 1333 East Washington Street. Admission is $42. Performances continue through December 18. Buy tickets or see the full schedule here. Lynn Trimble Get out and partake in some art this weekend in downtown Tempe.
Nick Bastian/CC BY-ND 2.0/Flickr

Tempe Festival of the Arts

Tempe Festival of the Arts returns to Mill Avenue in downtown Tempe from Friday, December 2, to Sunday, December 4. That’s your chance to explore more than 300 artist booths, featuring works in more than a dozen mediums — including painting, ceramics, sculpture, jewelry, and more. Look for local artists while you’re there, and bring your holiday shopping list. Festival offerings include a kids zone complete with a youth art exhibition and hands-on art activities, plus live music, street performers, and a chalk art competition. Hours are 10 a.m. to 5:30 p.m. daily. Admission is free. Lynn Trimble

This is the 66th year that people have gathered in downtown Chandler for the lighting of a tree constructed of tumbleweeds, one of the city’s long-standing annual traditions. The event also features a parade of lights. This unique holiday festivity on Saturday, December 3, at Dr. A.J. Chandler Park, 3 South Arizona Avenue, is also packed with performances and live entertainment from locals. The parade kicks off at 6:45 p.m. and the lighting ceremony is scheduled for 8 p.m. Both events are free to the public. Visit the city of Chandler website for more details. Amy Young

If you’re of a nerdy bent, it’s pretty safe to you’ve spent plenty of time in a library. The public institutions have long been a place for folks to get their learn on, thanks to their wealth of knowledge on any number of subjects. The annual LibCon West celebrates both the role of libraries and geekdom in general with an afternoon of activities at Velma Teague Library, 7010 North 58th Avenue in Glendale. This year’s edition is scheduled for Saturday, December 3, and will include all the usual fun you’d expect from a con, including vendor booths and appearances from cosplayers and local artists. Live entertainment will include lightsaber combat by Syndicate Saber United, pirate shenanigans by the DREAD Fleet, and an anime rave. DJ Dimension will also spin remixes of clips and music from video games, TV shows, and movies. A lightsaber walk around downtown Glendale will cap off the day. Admission is free and the LibCon West site has all the details. Benjamin Leatherman

An Arizona holiday-season staple, this parade features dozens of floats, spectacularly bedazzled with lights. Join thousands of others to enjoy this celebration of the season as it rolls along Central Avenue, Indian School Road, and Seventh Street on its jaunt through midtown Phoenix. Best of all, admission is free. The event happens — rain or shine — at 7 p.m. on Saturday, December 3. The starting point is at Central and Montebello avenues. Hit up the Phoenix Parks and Rec website for more information. Amy Young The stars of Lucha Libre AAA Worldwide are headed to Tempe.
Ticketmaster

If you’re a local fan of all forms of professional wrestling, the fact that Lucha Libre AAA Worldwide is coming to the Valley is certainly big news. The Mexico-based company, which dates back to 1992 and is considered to be one of the top lucha libre promotions in the world, will stage an event on Saturday, December 3, at the newly opened Mullett Arena, 411 South Packard Drive in Tempe. Five matches have been announced, each featuring the sort of high-flying that sets lucha libre apart from American pro wrestling. (And, yes, masked competitors will also be involved.) The undercard will include a tag-team bout between Lady Shani and Sexy Star versus Maravilla and Chik Tormenta, as well as a triple-threat match with Hijo del Vikingo facing off against Taurus and Daga. The main event will see former MMA star Cain Velasquez teaming with Pagano and Blue Demon Jr. against Black Taurus, Sam Adonis, and Gringo Loco in a “trios” match. Bell time is 7 p.m. Tickets start at $25. Benjamin Leatherman 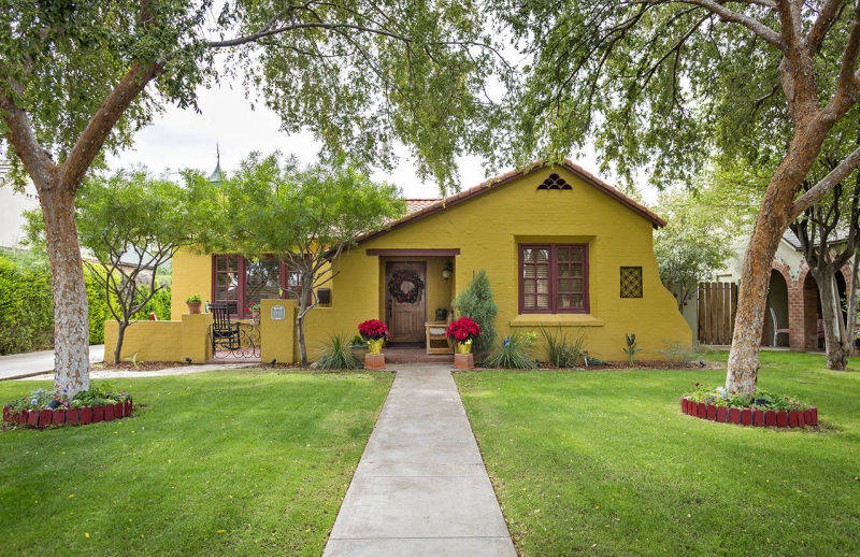 The homes in F.Q. Story each have their own personality.
Story Preservation Association

One of Phoenix’s oldest, historic neighborhoods is all dolled up for the holidays. The tour starts on Saturday, December 3, with luminarias, and carolers. The following day on Sunday, December 4, will feature vendors for your holiday shopping needs. Get a look at a unique mix of architectural styles this ‘hood has to offer, like Spanish Colonial, Tudor Revival, and Neoclassical. Admission is $20 in advance to tour the homes and $25 at the event; the street vendor fair is free. Hours are 6 to 9 p.m. on Saturday and 11 a.m. to 4 p.m. on Sunday. The tour’s website has more information. Amy Young

Watchu know about wushu? No, not the catch-all term for all Chinese martial arts that dates back centuries. Instead, we’re referring to the contemporary sport of wushu, which draws from Chinese fighting styles and involves competitors engaging in elaborate routines of martial arts moves (called taolu) or full-contact sparring with or without weapons (also known as sanda). Both disciplines will be on display at the Phoenix Wushu Nationals on Saturday, December 3, and Sunday, December 4, at the Phoenix Convention Center, 100 North Third Street. It will feature competitors from around the world who (depending on their wushu discipline) will show off their moves or spar against fellow combatants in various styles ranging from Shaolin Kung Fu to Chāquán. The two-day event will also include an Asian cultural festival, martial arts tournaments, a lion dance competition, and more. Hours are from 9 a.m. to 8 p.m. each day. Admission is $15 per day or $25 for the weekend. A full schedule is available here. Benjamin Leatherman
KEEP PHOENIX NEW TIMES FREE... Since we started Phoenix New Times, it has been defined as the free, independent voice of Phoenix, and we'd like to keep it that way. With local media under siege, it's more important than ever for us to rally support behind funding our local journalism. You can help by participating in our "I Support" program, allowing us to keep offering readers access to our incisive coverage of local news, food and culture with no paywalls.
Make a one-time donation today for as little as $1.