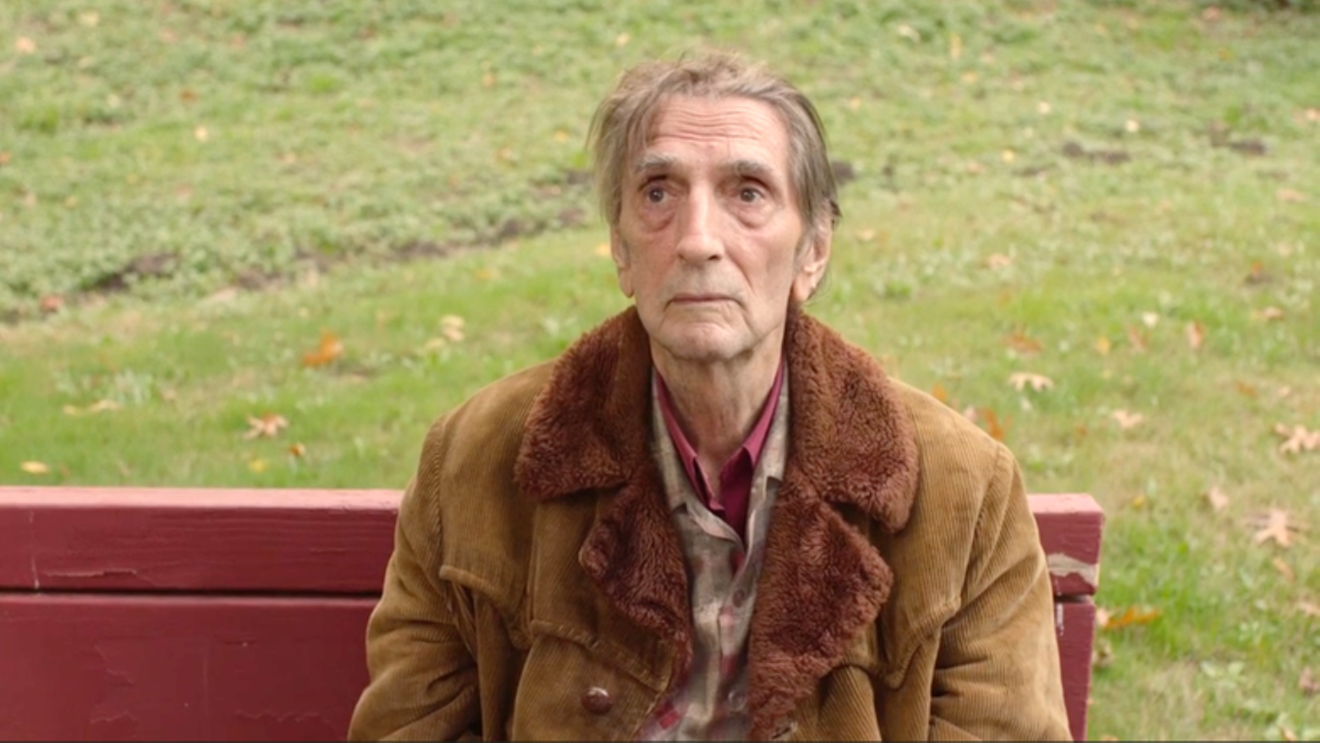 Harry Dean Stanton in Twin Peaks: The Return. Showtime/Rancho Rosa Partnership Production
Harry Dean Stanton, a veteran actor who appeared in over half a century's worth of film and TV shows, died on September 15 at the age of 91. He left behind a body of work that's remarkable in consistency and quality.

In an industry where movie star looks are everything, Stanton stood out by looking like "a real person." His lean, weathered frame made him look like the kind of guy who could pump your gas, sell you cigarettes, sit next to you on a prison bus, or take your kids to church on Sunday in his "world's best grandpa" plated car. He was a man who looked like he had seen everything that the world had to offer and not a damn bit of it impressed him.

A nicotine-stained stoic, Stanton's hangdog looks weren't the only thing that set him apart from other actors. He had an effective acting technique — one so affective that it rarely seemed like he was acting at all. Whereas so many other performers resorted to Method acting tricks that made them seem like they were trying to shout and emote their way out of the film screen, Stanton blended into his surroundings like a chameleon. He seemed as much a part of the world of his films as a rock or a brick wall. Wherever he turned up onscreen, it seemed like he belonged there.

He's had many memorable roles over his long career, but a few of them stand head and shoulders above his other work. Here are some of the roles that truly defined Harry Dean Stanton as an actor.

Harry Dean Stanton in Ride the Whirlwind.
Walter Reade Organization
Ride in the Whirlwind (1966)
Before Stanton got his start in movies, he was a regular bit player on TV Westerns like Rawhide, Bonanza, Laramie, The Rifleman. Stanton's weathered mug cropped up over and over again in "oatmeal operas."

It's only fitting that his first big film break was in a Western, when his old roommate Jack Nicholson got him onboard a Monte Hellman film (the actor would later appear in Hellman's cult classic car flick Two-Lane Blacktop as a hitchhiker).


If you only watch one Stanton movie, make it Alex Cox's sci-fi/punk classic.

Over the years, Stanton credited this film as being where he learned his less-is-more approach to acting, after Nicholson told him to "let the wardrobe play the character." His one-eyed Blind Dick doesn't feel like a character. He feels like Harry Dean Stanton being dropped into the middle of the Old West after a jaunt in a time machine.

Cool Hand Luke (1967)
In a film full of iconic moments, Stanton's singing almost outshines them all. The moment when his Tramp starts singing "Just A Closer Walk With Thee" shifts the movie onto a higher plane. Stanton's voice is surprisingly powerful.

You could hear all the miles his character must have traveled and suffered on by the way he sang that song. The fact that every film he was in after Cool Hand Luke didn't find an excuse to have him sing something feels like a huge missed opportunity.

Cigarette tucked into his mouth, muttering "right" so many times that he gets called a parrot, Stanton's totally believable as an unlucky schmuck on a spaceship. And his eventual death proves that it does not pay to be a cat person in horror movies.

Harry Dean Stanton in John Carpenter's Escape from New York.
20th Century Fox
Escape from New York (1981)
While getting his start as a character actor in Westerns, Stanton made the transition to a different type of genre movies in the '80s. Following his turn in Alien, he got a juicy role as Brain in John Carpenter's classic dystopian action movie.

Playing well off of Kurt Russell's badass Snake, Stanton shines as a wry presence who has to unload a fair amount of exposition. He also gets to have Adrienne Barbeau as a girlfriend, which definitely feels like a major upgrade after costarring with an acid-spitting H.R. Giger freak.

Repo Man (1984)
If you only watch one Stanton movie, make it Alex Cox's sci-fi/punk classic. Stanton's portrayal of Bud is the actor at 100 percent Stanton-ness. Whether it's snorting speed with Emilio Estevez or saying "Ordinary fuckin' people — I hate 'em" with a contempt that comes as easy as breathing, his veteran repo man is a take-no-shit, salt of the earth man.

One part Obi-wan Kenobi and one-part Dashiell Hammett's Continental Op, the film follows the super-competent and tough Bud as he shows his new charge Otto the repo ropes.

In a film bursting to the rafters with quotables, Stanton gets his fair share of brilliant lines. Watching him as Bud, it's kind of amazing that no director thought to cast him as Philip Marlowe. He's got the noir detective schtick down cold in this movie.

The film takes full advantage of Stanton's abilities, letting his silence and hangdog face speak volumes about his character. Wenders saw in Harry Dean an archetypal American figure: the zen cowboy. A weirdo, mystically inclined loner. The kind of man who likes Westerns, smoking cigarettes, and will talk your head off about chakras if you let him in. (Later in life, Stanton was fond of talking about mysticism in interviews.)

The opening scene alone ranks among one of the finest walk-ons any actor has gotten in their life: a mute, dusty, red-hatted Stanton stumbling through the desert while Ry Cooder's lonesome blues plays.

Pretty in Pink (1986)
Stanton's understated, world-weary presence made him perfect for the role of Andie's dad. While so many teen films often sideline the parent characters, his Jack is an integral part of the film.

Stanton barely has to open his mouth — every line on his face, every slumped shoulder broadcasts his character's profound disappointment in himself and in the cards life has dealt him.

It's what makes the scene where he gives Andie a dress so powerful. He's not just trying to cheer her up with a gift. He's trying, for once in his life, to get a win. And when she starts to question how he got the dress and he breaks down, unleashing years of repressed bitterness, it feels utterly real.

The confrontation between Stanton's pragmatic yet fanatical Paul and an aghast Jesus, horrified that his story is being twisted into something else entirely, is one of the film's darkest and most subversive moments. How often do you get to see a god confront his own religion in a movie?

Stanton's Paul is coldly matter-of-fact about his preaching, flat-out telling his own savior that he could care less if he was the real deal: The Jesus the people want to hear about is Paul's Jesus. That combination of coldness and unshakable belief in his own spiel feels like a dry run for Stanton's biggest TV role as prophet Roman Grant in Big Love (2006-2011).

Harry Dean Stanton in Wild at Heart.
Media Home Entertainment
The Films of David Lynch (1990-2017)
Stanton became a regular player in Lynch's films, starting with 1990's Wild at Heart. Lynch used Stanton's crotchety everyman acting style to great effect, giving the veteran actor small but choice bits in films like Twin Peaks: Fire Walk With Me and Inland Empire (Stanton's repeatedly hitting up his co-stars for money in Inland Empire is one of the actor's finest comic moments).

Working with Lynch also gave Stanton a chance to show off his versatility, whether it was as a frightened and ominous trailer park manager (Fire Walk With Me) or a sick man coming to grips with his mortality (The Straight Story).

In 2017's Twin Peaks: The Return, Stanton reprised the role of Carl from Fire Walk With Me. In the past film he was a paranoid and unpleasant man, but this version of Carl was full of empathy and warmth. Few actors could have handled material like Carl telling a trailer park resident to stop selling his blood with as much grace and seriousness as Stanton could pull off. Appearing in a series full of beloved dead actors giving their final farewells to the world, Stanton's role as Carl felt like a well-deserved curtain call.