Here's the Lineup for BlakTina Dance Festival in Phoenix

It launched last year, with some powerful performance art.

It’s part of Perea's vision to spread the festival to other parts of the U.S., as well as other countries.

The BlakTina Dance Festival in Phoenix will feature works by eight choreographers based in metro Phoenix, plus two works created by California-based artists. Each will choose their own dancers.

It’s happening on Friday and Saturday, August 24 and 25, at Phoenix Center for the Arts.

The L.A. festival will reciprocate this fall, inviting Phoenix-area choreographers to join that lineup. 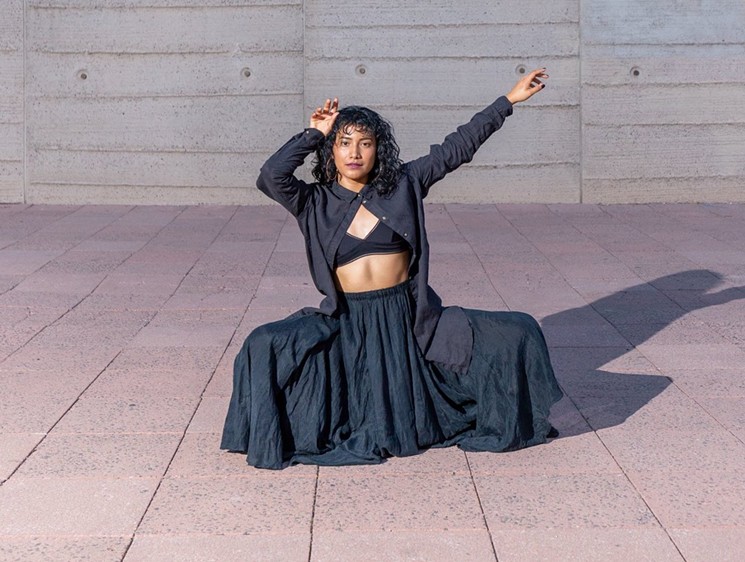 Ruby Morales is creating work for the 2018 BlakTina Dance Festival in Phoenix.
Audrey Pekala
Here’s what you’ll see during the Phoenix festival:

Café con Leche
Mexican-American dancer Ruby Morales is presenting a mix of poetry and movement that explores her own ambivalence about being a women with brown skin.

Healing
A modern dancer who currently performs with Cazo Dance, Malikah Fernandez returns to the festival after creating a 2017 piece called Scarred from Being Scarred. She’ll return in fresh ways to health issues and system-based barriers facing Black and Latinx communities.

The Invisibles
Arizona native and Mexican-American artist Erik Canales, who currently works with Ignite Collaborative Dance Company, is showing a piece exploring the struggles of immigrants who risk their lives to cross the U.S.-Mexico border in search of a better a better life and the American Dream.

Exhale
Alaska-born artist RaShawn Hart created a piece inspired by the expression “waiting to exhale,” which explores that moment in life when one anticipates getting relief, knowing that it may never come.

At the Essence 'there is no other'
Afro-Brazilian-American artist Alicia Lynn Nascimento explores the issue of otherness in collaboration with Puerto Rican-American artist Jenny Gerena and Black artist Sydney Jackson. The piece addresses complex social relationships and the adversities faced by women of color. Both Gerena and Jackson presented work in the 2017 BlakTina Festival.

The epic of a queer puerto rican...
Felix Cruz, artistic director for Cruz Control Collective, is delivering a movement-based commentary through a queer lens, which explores pop culture’s impact on contemporary society. Expect to see the intersection of political trends with Cruz’s queer aesthetic in the piece they’ve fully titled The epic of a queer puerto rican trying to make it through their white bred life part dos.

The Build Up: Part One
A California-based improvisation and freestyle collective comprising Aisha Shauntel Bardge and Stephen Tanner will be showing a work designed to explore and exude unapologetic energy.

BlakTina Dance Festival. 7:30 p.m. Friday and Saturday, August 24 and 25, at Phoenix Center for the Arts. Presenters note that it includes mature content and language. Tickets are $15 through Sunday, August 19. After that, tickets are $20. Visit the Facebook event page.
KEEP PHOENIX NEW TIMES FREE... Since we started Phoenix New Times, it has been defined as the free, independent voice of Phoenix, and we'd like to keep it that way. With local media under siege, it's more important than ever for us to rally support behind funding our local journalism. You can help by participating in our "I Support" program, allowing us to keep offering readers access to our incisive coverage of local news, food and culture with no paywalls.
Make a one-time donation today for as little as $1.