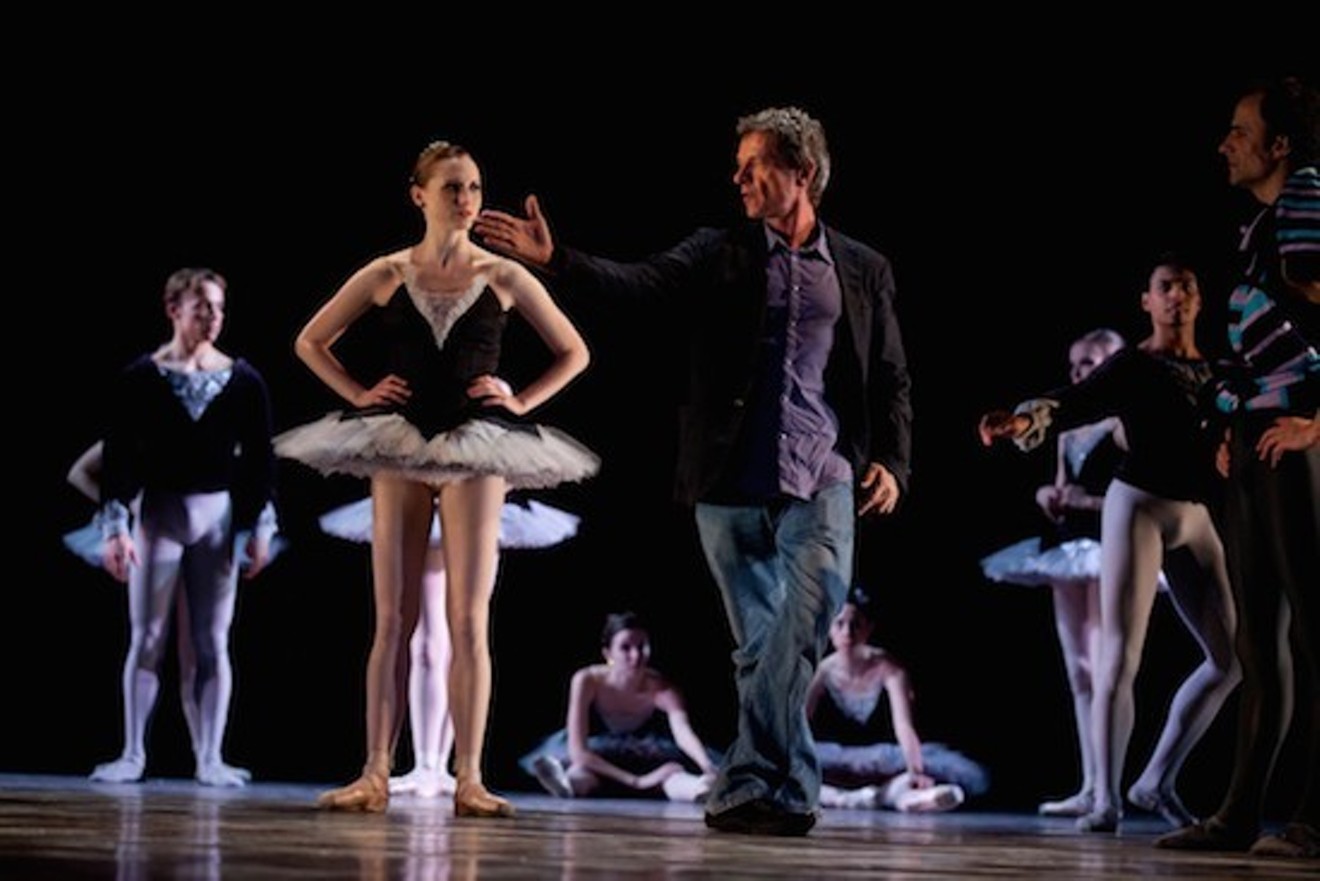 Cinco de Mario
Your dream of sipping rosé with an early ’90s heartthrob is about to come true.

Admission for the event is $20 online in advance, $30 at the gate. VIP tickets are $100 online in advance and include five drink tickets, as well as access to a private bar. If you want to meet Mario, the price goes up to $250. Kids 12 and younger get in free. Visit the Cinco de Mario website. Lindsay Roberts

Arizona Comic Mini Expo
Free Comic Book Day is an annual event when new (a very long word to describe comic book collectors) gather and get familiar with a local store. Adding to this year’s festivities, Samurai Comics is hosting the Arizona Comic Mini Expo. Hobbyists can meet more than a dozen of the creators behind some of the most exciting titles in the medium today. Andrew MacLean, the mind behind Headlopper, will be sketching and signing comics along with Mitch Gerads (Mr. Miracle), and Teenage Mutant Ninja Turtles’ Andy Kuhn, to name a few.

Turn the page from 10 a.m. to 5 p.m. on Saturday, May 5, at 1120 South Country Club Drive in Mesa. Admission is free. For more information, visit the Arizona Comic Mini Expo website. Jason Keil

Phoenix Flea After Dark
Talk about dynamic duos. CenPho boutique Phoenix General and the folks behind Phoenix Flea are teaming up to host a market that brings together desert-based creatives who make and design must-have items. During Phoenix Flea After Dark, shoppers can browse wares from about 60 vendors, including vintage clothing purveyor Vixen Valley, DIY maven Crafty Chica, ceramicist Tom Budzak, and everyone’s favorite pin-maker Jar of Buttons.

Shop till you drop at The Colony, 5538 North Seventh Street, from 5 to 10 p.m. on Saturday, May 5. Tickets are $5 via brownpapertickets.com. See the Facebook event page for details and a complete list of vendors. Becky Bartkowski

CozyCon
Dick Francis may be more appropriate for Derby Day, but if you like your mysteries solved by friendly old ladies and their cats, then snuggle up at The Poisoned Pen, 4014 North Goldwater Boulevard in Scottsdale, for CozyCon. The celebration of “cozy” mysteries runs from 1 to 4 p.m. on Saturday, May 5.

The event features eight of the coziest local and international authors, including bestsellers Jenn McKinlay, Kate Carlisle, and Paige Shelton, sharing homespun mysteries about bookstores, restaurants, shops, and the amateur sleuths who run them. (Also? Their beloved pets.) The group will participate in several panel discussions, with a mass signing to follow.

Admission is free and refreshments will be served. For more information, visit the Poisoned Pen website or call 480-947-2974. Michael Senft

Cinco on the sixth.
Arvizu Advertising & Promotion
Cinco de Mayo Phoenix Festival
It isn’t a misprint: the Cinco de Mayo Phoenix Festival is actually on Sunday, May 6. To celebrate the Mexican army’s victory over the French Empire in 1862, this family-friendly party will have games, vendors, a 125-foot burrito, and libre wrestling. Then, there is the stacked music lineup. Headlining the 25th anniversary of this event is the Grammy-winning group Ozomatli. The Los Angeles-based six-piece has been fusing rock, hip-hop, and Latin for almost as long as this festival has been in Phoenix.

Put on your sugar skull shirt and get down from noon to 10 p.m. at Cesar Chavez Plaza, 100 West Washington Street. Tickets are $5 to $60. For more information, visit the Cinco Phoenix website. Jason Keil

Arizona Diamondbacks v. Los Angeles Dodgers
Okay, it’s hard to hate the Houston Astros too much. They did prevent the dreaded Dodgers from winning the 2017 World Series. Young superstar shortstop Carlos Correa made the nation say “aww” when he proposed to his girlfriend during the celebration after Game Seven. Five-foot-6 second baseman Jose Altuve provided inspiration to short people everywhere by winning the American League MVP over 6-foot-8 Aaron Judge of the Yankees. And model Kate Upton and Houston pitcher Justin Verlander are sickeningly sweet newlyweds who have everything.

But , our Arizona Diamondbacks are off to the best start in their history and want to prove they can beat the world champs in the three-game series that wraps with a 1:10 p.m. face-off on Sunday, May 6, at Chase Field, 401 East Jefferson Street.

So, go D-backs. (And if all that’s not enough, you can bring your dog to the game on Sunday.) Tickets start at $22 via Ticketmaster. Stuart Warner

Letterpress Printing Workshop
Maybe you’ve been to Nancy Hill’s Hazel & Violet Letterpress for First Friday art walks. If so, you’ve likely marveled at her many printing contraptions — including a 1967 Reprex, 1935 Vandercook, and 1925 Potter. Turns out, you can try your hand at using them, during a letterpress printing workshop happening from 1 to 4 p.m. on Sunday, May 6, at 1301 Northwest Grand Avenue.

During the three-hour workshop, participants will learn the basics of letterpress printing and get to make their own coasters, posters, or stationery, using vintage designs. It’s $50 per person and space is limited. Visit the Hazel and Violet website. Lynn Trimble

The Bridges of Madison County
Take note, theater nerds. Composer Jason Robert Brown is coming to town. Brown’s musical score and orchestrations for a Broadway musical called The Bridges of Madison County earned him two 2014 Tony Awards. He’s performing in concert, and doing an audience talk-back, at 6 p.m. on Monday, May 7, at Arizona Broadway Theatre, 7701 West Paradise Lane in Peoria.

The evening also includes performances by the cast of ABT’s production of The Bridges of Madison County, which runs through Sunday, May 13. It’s the tale of two lovers whose affair alters both their lives. Tickets start at $25. Visit the AZ Broadway website. Lynn Trimble

“How to Achieve Anything”
Though we are probably afraid to admit it, fear sometimes gets in the way of our accomplishments. During “How to Achieve Anything,” Catherine Alonzo is going to talk about giving fear the middle finger and turning goals into realities. Alonzo is the CEO at brand and marketing firm Javelina, and she’s going to help make your success game strong, by sharing different strategies and techniques.

Airplane! Movie Party
Surely we are serious that an Airplane! Movie Party is coming to Alamo Drafthouse, 4955 South Arizona Avenue in Chandler. Just don’t call us Shirley. Have you ever seen this comedy classic? You can tell us; we’re a doctor. Either way, the East Valley theater will screen the film at 7:30 p.m. on Wednesday, May 9.

Prepare to laugh your butts off at the late, great, and hilarious Leslie Nielsen, who’s joined by Robert Hays, Julie Hagerty, and NBA-legend Kareem Abdul-Jabbar, a.k.a. Roger Murdock, co-pilot. Tickets to the 18-and-over film are $11.32. Also, does anybody know how to fly a plane? See details at the Drafthouse website. Dillon Rosenblatt

Wild Women Wednesday
Just because the famous quote, “Well-behaved women seldom make history,” has been misattributed to everyone from Marilyn Monroe to Eleanor Roosevelt doesn’t make it any less true.

Raise a toast to the rule-breaking, history-making ladies at 5394 South Lakeshore Drive in Tempe during Wild Women Wednesday. Every week at 6 p.m., Pier 54 offers drink specials like $4 cocktails and glasses of wine or Champagne and a chance to win an interior design consulting session, a yoga session, nail and hair services, and a LuLaRoe gift card.