Mix it up with minimalism. Courtesy of Phoenix General
Is there a better way to spend the weekend than dancing your wig off, cheering on the Arizona Cardinals, or checking out a twisted version of A Christmas Carol? We don't think so. For more things to do, visit Phoenix New Times' calendar.

Sazdanoff utilizes everyday materials, like linen and concrete, that are woven together to create a three-dimensional texture across her canvas. Her minimalist, mixed-media work aims to create a tangible balance of fluidity and contrast.

Check out Sazdanoff’s pieces at the opening reception from 5 to 8 p.m. on Friday, December 22, at 5538 North Seventh Street, #120. For more information, visit the Phoenix General website. Lindsay Roberts 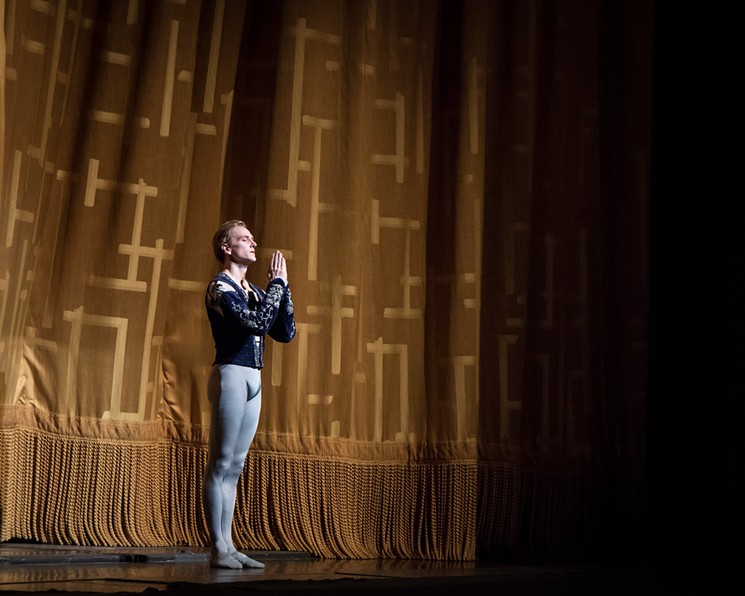 Get to know ASA's most famous alumnus at Changing Hands Bookstore.
Kent G. Becker
David Hallberg
After graduating from Arizona School for the Arts, David Hallberg went on to become a principal dancer with American Ballet Theatre in New York City. Hallberg was the first American to be named a principal dancer with Russia’s renowned Bolshoi Ballet, and he’s a guest artist this season with the Royal Opera House in London.

Hallberg grew up in Phoenix, where he began formal ballet training in his early teens. You can hear him talk about his many adventures, in dance and beyond, when he comes to Changing Hands Bookstore, 300 West Camelback Road, at 7 p.m. on Friday, December 22. The event is co-presented by Ballet Arizona.

Hallberg will be discussing his new memoir, titled A Body of Work: Dancing to the Edge and Back, in conversation with Ib Andersen, artistic director for Ballet Arizona. For $28, you get two tickets and a copy of Hallberg’s book. Visit the Changing Hands website. Lynn Trimble

Yule want to be there.
Benjamin Leatherman
Yule Ball
Those who can distinguish between wizards and Muggles, this is the holiday party for you. The Yule Ball re-creates the event from Harry Potter and the Goblet of Fire in which Potter and his magical pals got gussied up to dance and toss back Butterbeer. That signature drink is on this evening’s special menu, along with others like Polyjuice Potion and Unforgiveable Curse shots.

Waiting for a chance to slip into your magical robes? Good — because it’s a costume party, with a contest for those who really want to do it up. While you’re feeling competitive, show off your Harry Potter knowledge, as the fun includes rounds of trivia. Order of the Phoenix performs live music and a special guest DJ will keep the Great Hall rocking.

This Hogwarts-inspired happening starts at 7 p.m. on Friday, December 22, at The Van Buren, 401 West Van Buren Street. Admission is $10 for 18 and older. See details at the Van Buren website. Amy Young

The graveyard is no place for subtlety in A Christmas Carol.
Scott Samplin
A Christmas Carol
For decades, Charles Dickens traveled from town to town, performing A Christmas Carol for enthusiastic audiences. (As in a good bedtime story, he did all the voices.) Dickens’ fame as an author meshed nicely with contemporaneous widespread illiteracy — a little something for everyone.

Stage versions of the story have been around even longer. This year, as Dickens did, Arizona Broadway Theatre hits the road, transporting Alan Menken and Lynn Ahrens’ epic musical mounting from Peoria to downtown Phoenix through Thursday, December 28. The feeling’s traditional, despite zazzy effects, tap dancing, and chorus girls. Chuck would approve. The time for yoga is meow.
Jordyn Carias
Caturday Yoga
If you’re a cat person, interacting with the furry creatures can be a great way to unwind. At La Gattara Cat Lounge and Boutique, 1301 East University, #136, you can practice yoga in the same room with 20 adoptable cats and kittens. Lauren Doyle from Bodhi Building will lead you through different poses on the mat before reading from The Tao of Meow, a story of wisdom told from a cat’s point of view. 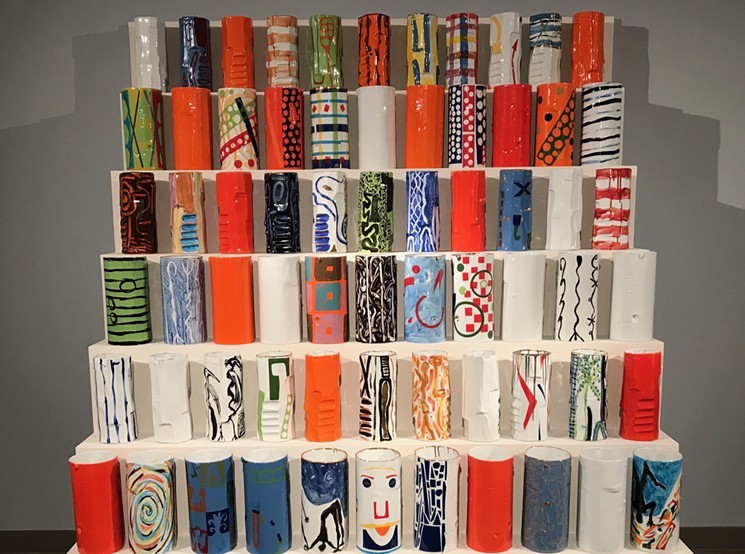 Visit the Brickyard, 699 South Mill Avenue in Tempe, between 11 a.m. and 7 p.m. on Saturday, December 23, to see how these artists pushed the boundaries of the medium during time spent at a porcelain factory in Triptis, Germany. One was inspired by hubcaps, and another by ocean life. The free exhibition continues through February 3, 2018. See the ASU Art Museum website. Lynn Trimble

Sunday in the bark: Go, Dog. Go! neither sits nor stays.
Tim Trumble
Go, Dog. Go!
P.D. Eastman was not Dr. Seuss. The two served together in the Army’s film unit, and Eastman’s fun, simple books for little kids are published under the Cat in the Hat’s umbrella, so people who are confused about the whole thing should be cut some slack.

Eastman’s Go, Dog. Go! is the gripping tale of six pooches who can’t sit still, are obsessed with vehicles, and really just want to party. There’s also a dog who’s quite picky about hats. The closing performance of Childsplay’s production of the rollicking stage version starts at 1 p.m. on Saturday, December 23, at Tempe Center for the Arts, 700 West Rio Salado Parkway. It’s meant for audiences 3 and older. Tickets are $15 to $26 at the Childsplay website or 480-350-2822. Julie Peterson

Not surprisingly, when the Giants visit Glendale’s University of Phoenix Stadium, 1 Cardinals Drive, on at 2:25 p.m. on Sunday, December 24, Eli will be on the field and Coach Ben will be on the bench — make that the couch. Tickets are $18 and up. Visit the Cardinals website or call 623-433–7101 for details. Rob Kroehler